An Egyptian scuba diver this week will attempt to break the world record for the deepest dive.

Gabr‘s attempt “has been assessed and accepted by Guinness World Records,” according to the H2O Divers Dahab website. “On Ahmed’s descent line, there will be markers strategically placed from the 320m zone downwards. In order for this to be an official record, Ahmed needs to reach the tag and secure it. Although he is aiming for 350m, anything below the record set now will count as a new world record.“

An Egyptian military officer, Gabr has also been trained as a combat diver by the U.S. military.

Gabr originally began his quest to break the world dive record in 2010, but his country’s subsequent political upheaval put those plans on hold.

Gabr‘s world record attempt will be filmed for a documentary by Didier Noirot, who was on the film team that won an Emmy for the BBC documentary “The Blue Planet.” Noirot has also filmed for the late Jacques Cousteau.

The extreme dive is scheduled to take 14 hours to complete, with the smallest portion being the descent, according to H2O Divers Dahab. “Ahmed and his support diver team will use about 90 tanks (plus 17 twinsets) in the course of the dive. His ascent is so long to allow for his enormous decompression time.” 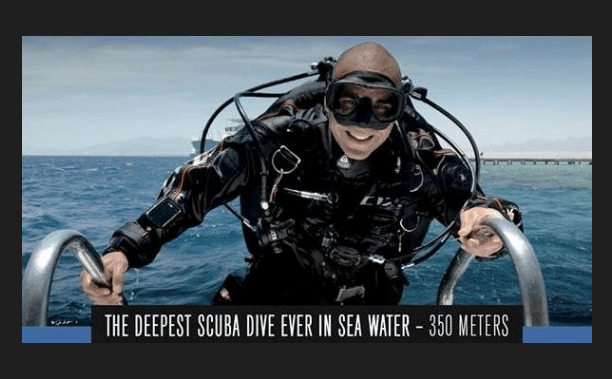