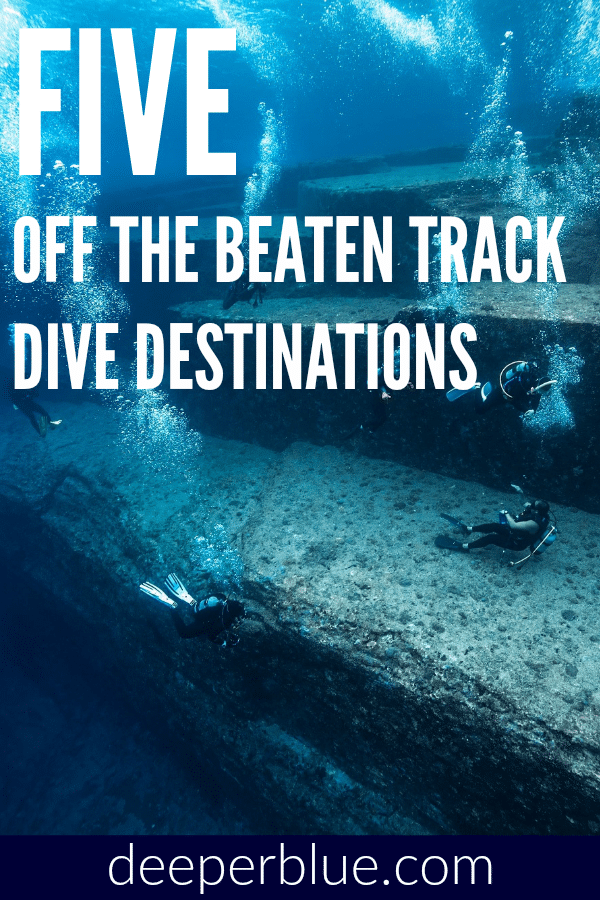 Most of us ran out of space on our diving must-do list a long time ago. The world is full of iconic dives – muck diving in Indonesia, shark diving in South Africa, wreck diving in Egypt. The path to each of these dive destinations is well trodden – after all, the stories of those that have gone before are what makes each one so famous. However, there’s much to explore off the beaten track as well. In this article, the phrase “off the beaten track” doesn’t necessarily mean hard to get to or even particularly remote. Instead, it refers to less frequented dive destinations that nevertheless deserve a spot on our already crowded bucket list.

There’s nothing secret about the Red Sea. After all, Egypt is commonly hailed as one of the best dive destinations in the world. However, if you’re looking to take your Red Sea adventure to the next level, consider heading further south to Sudan. Here, untouched reefs offer healthier corals and a higher density of life than their Egyptian counterparts, and the liveaboard routes see far less traffic. Liveaboards depart from the Port of Sudan or Port Ghalib in Egypt.

Sudanese diving is characterized by steep drop-offs and soaring pinnacles, which in turn attract sought-after species like manta rays and scalloped hammerheads. In fact, shark populations here are some of the most abundant on Earth, with possible sightings including grey reefs, silky sharks and silvertip sharks. Large shoals of barracuda and tuna are also common, while the visibility is typically excellent with an average of 30 metres/ 100 feet.

Like its Egyptian cousin, Sudan is an excellent destination for wreck enthusiasts. One of the most famous Sudanese wrecks is that of the Umbria, an Italian cargo ship intentionally scuttled by her captain to prevent seizure by the British during the Second World War. The wreck still contains 360,000 aerial bombs in addition to various other wartime paraphernalia. A visit to Jacques Cousteau’s underwater habitat Conshelf II is another highlight of diving in Sudan.

Previously known as Burma, the South East Asian country of Myanmar only opened its borders to tourism in 1997. Since then, the infant dive industry has expanded slowly, so that many dive sites are still waiting to be discovered. There are only a handful of liveaboards in operation here, meaning you’re unlikely to encounter other divers while exploring the country’s colorful reefs. Most trips center around the Mergui Archipelago, a collection of over 800 isolated islands.

Inhabited exclusively by Myanmar’s indigenous sea gypsies, the Mergui Archipelago remains largely untouched. The reefs are populated by magnificent hard and soft corals, which in turn support shoals of schooling fish like barracuda and trevally. The archipelago’s varied topography and nutrient-rich currents attract a wealth of large pelagic species, including manta rays, eagle rays and whale sharks (in season).

Resident highlights include zebra sharks and lemon sharks. One dive site, Shark Cave, is famous for its sleeping nurse sharks. Increasingly, macro life has become a big draw for Myanmar divers, with dive sites yielding a rich collection of cuttlefish, frogfish, pipefish and crustaceans. For those that prefer land based diving, try Myanmar Andaman Resort in the Mergui Archipelago, or head north to the beach towns of Ngwe Saung and Ngapali.

Located in Southern Africa, landlocked Botswana is one of our most unlikely dive destinations. However, in the northwest corner of the country, the magical Okavango Delta provides a once-in-a-lifetime opportunity for high-adrenalin diving with Nile crocodiles. As the point at which the mighty Okavango River disappears mysteriously (and permanently) into the earth, the Delta provides a suitably dramatic setting for encountering the world’s second largest reptile.

The largest Nile crocodile specimens on record exceed 6 meters/ 20 feet in length, making this one of the most fearsome apex predators on the planet. Diving with the crocodiles is only possible in the Botswanan winter (June – July), when water temperatures drop as low as 13°C/ 55°F. These frigid temperatures cause the crocodiles to become lethargic, and increase water visibility to around 6 meters/ 20 feet.

These two factors render an undertaking that would be potentially lethal at any other time of year relatively safe. Crocodile diving in the Okavango Delta is conducted without a cage under one-on-one supervision. It’s an experience for the brave, the financially solvent (trips carry a price tag of around $18,000) and the confident. Flawless buoyancy control is essential – because accidentally bumping into a sleeping Nile crocodile is never a good idea.

Japan’s many islands span an impressive variety of different climates. From ice-diving in the far north to tropical diving in the south, Japan has something for everyone. Okinawa Prefecture is perhaps the most rewarding dive destination, however. It is the southernmost of Japan’s prefectures and includes hundreds of islands collectively known as the Ryukyu Islands. This region is famous for colorful reefs, big pelagic action, and WWII wrecks.

In terms of the latter, the most famous wreck is that of the USS Emmons, a Gleaves-class destroyer struck by five kamikaze pilots whilst staging for the US invasion of Okinawa. 60 US sailors were killed in the attack and the destroyer was damaged irreparably. The following day, the decision was made to sink the ship in order to prevent her from falling into enemy hands. Today, she lies in 45 meters/ 150 feet of water, although her bow is within reach of recreational divers.

The area is also famous for the stunning geological formations of the Yonaguni Monument, thought by some to represent the sunken ruins of an ancient city (although this theory has never been confirmed). Yonaguni Island and Kume Island are also great places for spotting scalloped hammerheads in winter (November – May), while Ishigaki Island boasts year-round manta sightings (with July – September being the best months).

For those that enjoy cold-water diving, Greenland tops the list of off the beaten track dive destinations. Expeditions to the west coast between Kangerlussuaq and Disko Bay are famous for iceberg diving, allowing you to explore an ethereal underwater landscape that is constantly evolving. In this way, each trip brings unique sights never before seen by another dive group. The best time to visit is in late summer (July – September) when the bergs drift southwards from the Arctic Circle.

Although the icebergs themselves are the main attraction, Greenland diving also offers the opportunity to explore kelp forests and cold water coral reefs. The marine life here is fascinating, ranging from Arctic oddities like lumpsuckers and wolf-fish to brightly colored sea stars, sea cucumbers, and sponges. The topside scenery is equally stunning, with sweeping mountains, plunging fjords and vast glaciers.

Those that travel in the height of summer will experience the phenomenon of almost round-the-clock daylight, while September visitors stand a good chance of witnessing the Northern Lights. Diving season also coincides with the annual migration of several whale species including humpbacks, minkes and fin whales. Water temperatures hover at around freezing, so cold-water experience and specialized equipment including a drysuit is compulsory.

Jessica Macdonaldhttp://goafrica.about.com/
Originally from the UK, Jessica now lives on South Africa's spectacular east coast. She's a qualified PADI Open Water Scuba Instructor, as well as a keen conservationist and shark fanatic. When she's not underwater, she can be found at her computer where she works as a freelance diving and travel writer.