Back in 1990, French freediver Loïc Leferme founded AIDA with Roland Specker and Claude Chapuis on the coast of Nice.  Leferme was the world freediving record holder until he was surpassed by the Austrian “flying fish” Herbert Nitsch. Loic left a significant mark on the sport of freediving and an even bigger impression on Guillaume Néry.

“Today I broke the french record in Constant Weight with a dive at -118m. Same depth Loic did in 1998 at his first record No Limits when I met him in 1998… Loic, this dive was for you!” Guillaume said as he dedicated what would be his first title grab at Suunto Vertical Blue. Yesterday on the sixth day of the Suunto competition Guillaume Néry set his second national record of the event by increasing his depth by three meters to 121 CWT. On what was heralded as the big day at the big tent Néry emerged triumphant among the deepest athletes of the day.

“My dive was really good; my legs felt so strong on the ascent which is why I went so quickly,” explained Guillaume, “for me the surface protocol is just as important as technique at depth– I don’t like to do a dive unless I know I can be in complete control at the surface.” And in control he was, as he clearly demonstrated why the freediving community has nicknamed him “Mr. Smooth.” Watch Guillaume’s record-setting dive in the video below. 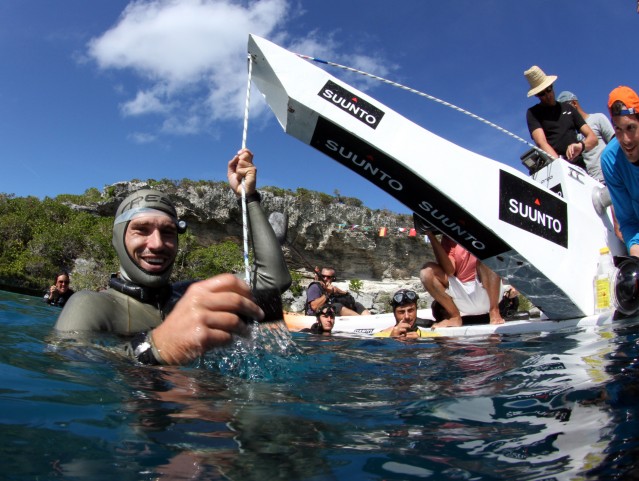