After having been open water certified over four years earlier, logging 149 dives (including weeklong dive trips to Belize and Fiji) and becoming a PADI Master Scuba Diver, I finally made my first dives at the famed (some might say infamous) Monastery Beach. I had received a lot of advice (and warnings) about diving Monastery ever since initial certification. These included anecdotes about the “Monastery Crawl” from my 76 year old father-in-law, who had done a number of dives in the Monterey and Carmel areas since the mid-1950s. 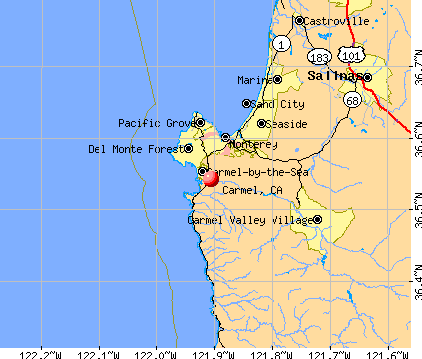 The common threads among the myriad cautionary tales were; 1) the height of waves changes quickly and you can get really pounded into the sand on entries and exits, 2) you have to be very cognizant of what the current from the Carmel River is like when you are diving there, 3) the waves will pound you into the sand if you are not careful, 3) lots of divers have gotten into trouble there (including several deaths over the years), 4) you can get pounded into the sand here by the waves. I personally know a pair of divers that both got knocked down here, with one doing a face plant into the sand, sans regulator in the mouth. To keep the buddy from drowning the other diver stripped the buddy out of their BCD and dragged the buddy up to the beach while the current and waves then swept the buddy’s entire kit of BCD, tank, regulators, etc. out to the Carmel Canyon, where it was then lost.

Despite all the anecdotes I eagerly accepted an invitation to dive there from a young Divemaster in training I had met a few months before when doing some boat dives off the “Monterey Express” out of Monterey’s Fisherman’s Wharf harbor. Along with all the stories about the hazardous entry and exit from the beach I had also heard the diving here was among the best spots in the area, as you can get out to very deep spots not far from the shore. This is because the Monastery Beach is close to an arm of the Carmel Canyon, a vast, very deep submarine formation. Consequently the beach at Monastery resembles a saucer, with a steep drop off once you get into the water. Within a few steps of entry you can easily be over your head in water depth. 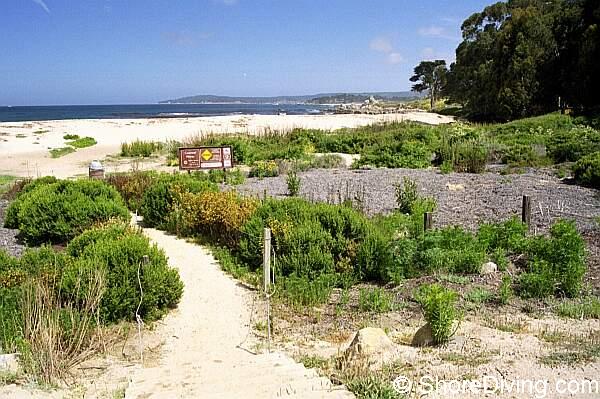 I arrived at the beach shortly after 8:00 AM, my buddy about a half hour later. The beach is a little past the Carmel River bridge on California Highway 1, heading south from Carmel. There is no parking lot but there is plenty of road shoulder to pull over and park on. I parked near the north end of the beach. From here you walk along a path going slightly downhill through some tall grasses and wildflower, up on the sand a bit, then down to the surf. The sky was clear, the winds were low then and the Carmel Bay in this section had waves only 12”-15” high. After scouting the site for where we wanted to enter and exit, gearing up and doing our buddy checks we entered at the north end of Monastery Beach near some kelp.

After only 5 or 6 steps in I was in water up to my chest and started pulling my fins on. In preparation for eventually making this dive, a few months earlier I had switched my fins’ straps from the factory with spring type straps, which make putting on fins (and taking them off) a lot faster. After getting one fin on in a few seconds, while starting to pull on the spring on the other fin, a small wave probably no more than 18” in height swept over me and pushed me toward shore. With the steep drop off of the beach combined with the undertow after the wave hit the shore, I found myself being tumbled like a tumbleweed in the wind and doing at least two full rotations before coming to rest on the sand sitting on my rear. Luckily I had followed my buddy’s advice and had my regulator in my mouth from the moment we entered the water. If I had had my snorkel in my mouth when the wave hit me I would no doubt have swallowed seawater while being tumbled.

I got up and reentered the water, this time making sure I was going to have a reasonable time between waves to get my fins on. This time I got them on quick enough and was able to start surface swimming out on a mostly WNW heading toward the wash rock out past the kelp bed. We swam out about 150 yards, passing a snowy egret standing on a thick patch of kelp on our way out. We made our descent and had a 33 minute dive, reaching a depth of 97’ at one point. The water was 50 degrees Fahrenheit. I was once again glad I had taken the plunge and bought a dry suit about a year earlier. My buddy was wearing a full 6.5 mm wetsuit. Visibility was better than average in my experience diving in Carmel Bay, probably 30’-40’ during the dive. Not the best visibility I have had in the area but certainly not the worst either. 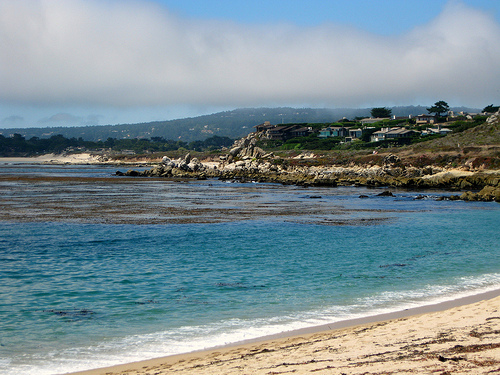 There were some very large harbor seals frolicking amongst the kelp and rocks during our dive. No otters that day though. I did not get as many photos on this dive as I would have liked because I found I was under-weighted a bit, and had to focus on maintaining proper buoyancy. The rocks in this location are chock-full of marine life — I saw several types of nudibranchs, spider crabs, star fish, lots of fish eating, myriad species of anemones, and all kinds of snails — truly an abundant ecosystem. Typically, to see this much variety in the types of marine life on one dive in either Monterey or Carmel Bays I would normally have had to make a boat dive. Shore diving at Monastery is definitely worth return visits.

On the exit, while I was trying to get my fins off I again got tumbled by an incoming wave a roll or two. Again I had kept my regulator in my mouth and my buddy and I had surfaced with plenty of air in our respective tanks, so I did not swallow any seawater. I managed to get onto my hands and knees and then exited by doing the Monastery Crawl.

We had a long surface interval and on our second dive I managed to enter without getting tumbled this time. We had a 44 minute dive this time and went to 54’ depth. I had strapped on another few pounds of weight around my ankles this time and shot a dozens of photos of anemones, starfish, nudibranchs, rockfish, greenlings, a blue ringed top snail and a moon jellyfish. I again exited doing the Monastery Crawl but happily did not get tumbled by the waves first this time. 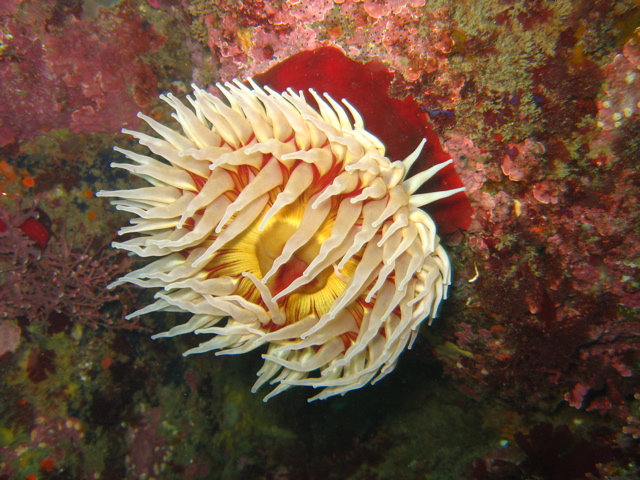 When I got home that afternoon and was rinsing out my gear in my driveway I found that while being tumbled a few times on my first dive and doing the Monastery Crawl on exits both times, I had managed to pick up probably a half pound of what passes for sand at Monastery Beach. The “sand” there is in fact small pebbles, about the size of a BB or little smaller, sometimes referred to as Monastery Berries. My BCD was full of them, with every nook and cranny of it having some. These pebbles can cause some problems as I found one of my ankle weights’ releases had jammed with a pebble or two and I had to slip off the weight over my foot after I took off my rock boot to get the weight off.

This is one of the best beach dives in the Monterey Bay and Carmel Bay areas, but it is not for beginner divers. I would not recommend it for anyone that has not done a couple of dozen beach dives already. In particular my advice to anyone contemplating diving here is: 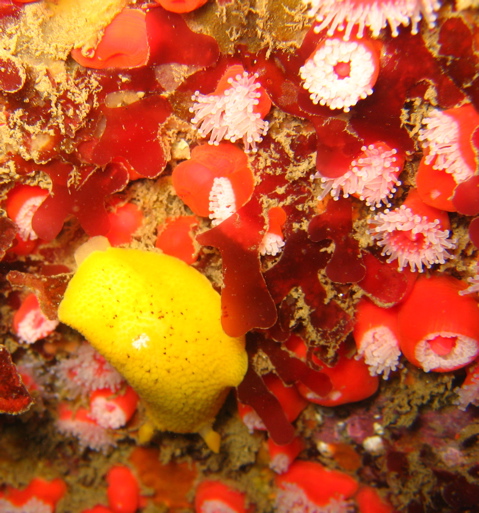