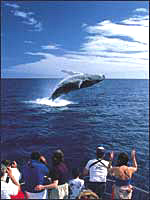 Three humpback whales were sighted this morning about 200 to 300 yards offshore from the Embassy Suites in Ka’anapali — Maui’s first humpback whale sightings of the season, reports Pacific Whale Foundation.

The three whales were observed at around 7:30 a.m. by Earl Smith and his wife Maureen O’Hara Smith. They watched the trio with binoculars from their lanai at the Maui Kai, which is next door to the Embassy Suites. A Maui resident for 34 years and a fisherman, Earl was certain that the animals he saw were humpback whales.

"They were just on the other side of the reef, coming from the direction of above Napili," said Earl. "They were swimming towards the Ka’anapali resorts."

The Smiths commented that the whales did not appear to be full size, indicating that they may be juvenile whales. This is consistent with other early season sightings in Hawaii and in other parts of the world.

"Pacific Whale Foundation’s extensive research in Australia, where we have been able to observe seasonal humpback migrations over a long coastline, shows that the earliest whales in the winter calving areas are frequently juveniles," remarked Kaufman.

The humpback whales travel a distance of about 2,500 to 3,000 miles from their summer feeding areas near Alaska to the warmer waters of Hawaii. While in Hawaii, the whales mate and give birth to their calves.

"We’ll be getting sporadic sightings from this point on, as the whales arrive and disperse throughout the Hawaiian Islands," says Kaufman. "It’s likely that we’ll be hearing of the season’s first sightings in Kauai soon."

"The whale sightings will become more consistent around mid-November, and then like clockwork, there will be daily sightings starting December 1st," says Kaufman.

"With the recent trends showing the whale population growing in the range of 6 to 8% per year, we are looking forward to another terrific whalewatdch season," says Kaufman.

Cliff Etzel
Cliff is the former Freediving editor of DeeperBlue.com. He is now a freelance journalist and film-maker.

Applications Are Open For The 2022 PADI AmbassDiver Program

Has Norway’s Whale Meat Industry Gone to the Dogs?