One World One Ocean Partners with America’s Cup

One World One Ocean (OWOO) is a campaign committed to inspiring people everywhere to protect the ocean. With that one goal in mind the campaign is working with partners to get the word out; partners like the America’s Cup Race and world renowned diver and oceanographer Sylvia Earle, who both recognize that everyone, everywhere depends on a healthy sea.

As anticipation builds for the 34th America’s Cup, the race organizers are very focused on what their legacy should be — they understand they have a natural connection to the oceans, and they believe it is their duty to act as responsible environmental stewards in their use of the oceans, all while emphasizing sustainability. 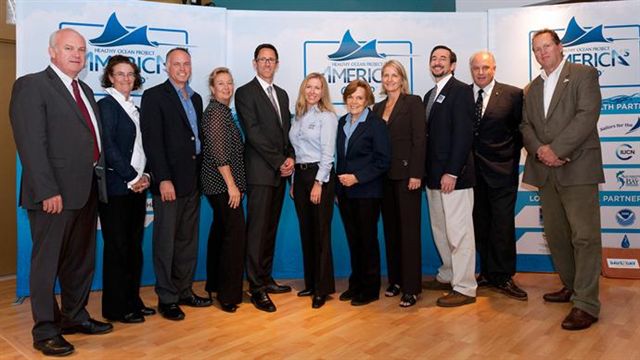 OWOO will produce three IMAX movies, one feature film, eight television specials and 1,000 online video’s including 30 second public service announcements that will play within the America’s Cup coverage. It will be a terrific opportunity to reach a very wide audience and for America’s Cup to be seen as something more than just an egomaniacal rich-man’s yacht race.

The purpose of the many videos that are being produced is to raise awareness in three key areas: 1)  to increase the understanding and prevalence of protected areas to give sea-life a chance to rebound; 2) to educate people about eating fish, what is sustainable and what is not; and 3) to reduce plastic pollution in the ocean. Sylvia Earle and Shaun MacGillivray hope to promote ocean conservation through OWOO — the largest media campaign of its kind.

The relatively small company behind this big idea of global ocean protection – MacGillivray Freeman Films – also boasts big accomplishments such as creating the highest-grossing giant-screen film ever produced (Everest, 1998), and the longest-running documentary to play in one theatre (To Fly! has played at the Smithsonian’s National Air & Space Museum non-stop since 1976). It is with this distinguished pedigree that MacGillivray Freeman Films seeks to replicate an aquatic success vis a vis One World One Ocean.

Suunto give us an inside look onto the process of how a dive computer makes it off the drawing board and onto your wrist.
Read more
Scuba Diving