The Hidden Gem of the Maldives: Huvadu Atoll

In my previous article, Coral Bleaching in the Maldives, I spoke about atolls and dive sites where most of the divers who have visited Maldives, have discovered already. Those are generally North and South Male, Lhaviyani, Ari, Mulaku, and Baa Atolls.

The Maldives has revealed another well kept secret. Huvadu (also known as Suvadiva) Atoll is the deepest atoll in the Maldives (inside reef 90 metres deep). It is also the second largest atoll in the world, next to Kwajalein, of the Marshall Islands.

The history behind the southern atolls, Huvadu and also Addu, goes back to British, Portuguese and Dutch influences. Research indicates, however, that the Maldives lay on the maritime trading routes of early Egyptian, Mesopotamian, and Indus Valley civilizations, as early as 2,000 BC. It is believed that early sun-worshipping seafarers, called the Redin, first settled on the islands. Even today, many mosques in Maldives face the sun and not Mecca, lending credence to this theory.

The interest of Middle Eastern peoples in Maldives resulted from its strategic location and its abundant supply of cowrie shells, a form of currency that was widely used throughout Asia and parts of the East African coast since ancient times. Middle Eastern seafarers had just begun to take over the Indian Ocean trade routes in the tenth century A.D. and found Maldives to be an important link in those routes. The importance of the Arabs as traders in the Indian Ocean by the twelfth century A.D. may partly explain why the last Buddhist king of Maldives converted to Islam in the year 1153.

Beginning in the 1950s, political history in Maldives was largely influenced by the British military presence in the islands. Britain obtained permission to reestablish its wartime airfield on Gan in the southernmost Addu Atoll, with a 100-year lease, which was later shortened. Then, on July 26, 1965, Maldives gained independence under an agreement signed with Britain. The British government retained the use of the Gan and Hitaddu facilities. In a national referendum in March 1968, Maldivians abolished the sultanate and established a republic.

Today, Huvadu and Addu represent a strong attraction for the tourist community. As yet, there are no tourist resorts in Huvadu, and only two liveaboard dive boats operate in the atoll, to my knowledge. The airport at Huvadu has recently been upgraded to accept night flights, and reopened just this week. 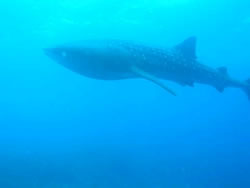 So apart from its rich history, that you can see by visiting the local islands, what is the big attraction? Huvadu appears to be unaffected by coral bleaching on most of its dive sites. It has been at least 7 or 8 years now since divers have been able to see healthy table corals, some 2 to 3 metres across. Since the heavy bleaching in 1998, there are only a few dive sites in the habitual atolls where liveaboards operate, where one can see more or less healthy reefs. But Huvadu, still has coral reefs that stretch for miles into deep channels, with a huge abundance of marine life that is unmatched anywhere else experienced in the Maldives.

Not just for its reef fish, but imagine drifting from an outside reef into a channel and coming face to face with a group of blue marlins! Only 4 months ago while diving on the corner of a reef formation did one of the dive instructors on our team see a 5-metre tiger shark swim by, at very close distance. Surely these are opportunities not to be overlooked. There are reefs where you enter, with a fairly strong current, and there are groups of blacktip reef sharks (unusual to see), and we have also encountered groups of female pink whiprays, in formation, waiting in the current for their mates. On one single dive we have seen up to five different kinds of ray, a 2-metre giant grouper, and so many big-eye trevally (followed up by grey reef sharks). Such dives certainly make the biggest marks in my logbook.

The state of the ocean’s reefs of the world is in a precarious position. For some, it is just a matter of time before they catch up to the rest.

So basically I am extending to you all an invitation. An invitation to book your diving experience of a lifetime. A unique cultural experience combined with some of the unbeatable dive sites of the world. The best time to dive Huvadu, is between January and April due to the direction of the current and the monsoon winds of that season.

To dive Huvadu.. you can book through Regal Dive (UK), or SubAqua (Germany), Jettours (France), or Sultans of the Seas (Italy), Diving Holidays (Netherlands). For more information you also may email our office at [email protected]

Soon I hope to be able to post some more photos of the marine life that we have been seeing over the last months. Until then, I wish you all safe diving, and hope to see you all in Huvadoo.