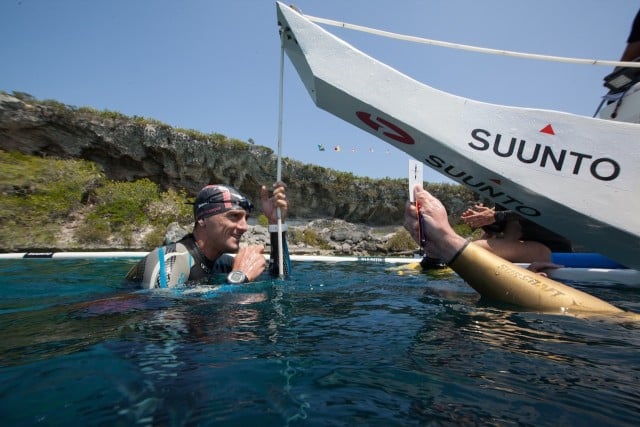 It was a day of TWO’s yesterday at Suunto Vertical Blue in the Bahamas. On the second day of the competition world-record holder (and event organizer) William Trubridge successfully completed a stunning dive to 92 meters constant no-fins in three minutes and :40 seconds, Sofia Uribe Gomez set her second NR for Columbia with a 51m CNF dive, and Alejandro Lemus of Mexico was also “Two for Two” as the saying goes — he set another national record for himself (day one was 88m FIM, day two 60m CNF), which is a penultimate goal for Alejandro as he is seeking a Mexican hat trick this year at #VB2015. Not to be left out Shiv Madhu of India, who currently lives on Long Island to train, doubled up on his NR’s in free immersion with his second record-setting dive in two days (70 FIM and 77 FIM respectively).

The conditions in Dean’s Blue Hole continue to be terrific with crystal clear visibility down to about 30 meters, which most of the divers and all of the photographers really like, but Shiv offers a different point of view…”The hole is  very humbling place for me and I feel a very strong connection with it. I have my eyes closed on all of my dives, so visibility isn’t a concern for me. On a day like today, when there’s close to 30m of vis, there’s a lot of beauty in the hole. But, I personally love the hole best when it’s dark and cloudy. I love the way descending into the darkness feels. I’ve done a few dives around midnight at the hole (I did one on new year’s eve), and that’s when I feel closest to it, and find it at its most beautiful.”

Stay tuned for more athletic and astounding performances today on Day 3 of the competition, including a free immersion attempt of 115 meters by Trubridge this afternoon, and check out all the results on the Vertical Blue daily results page.