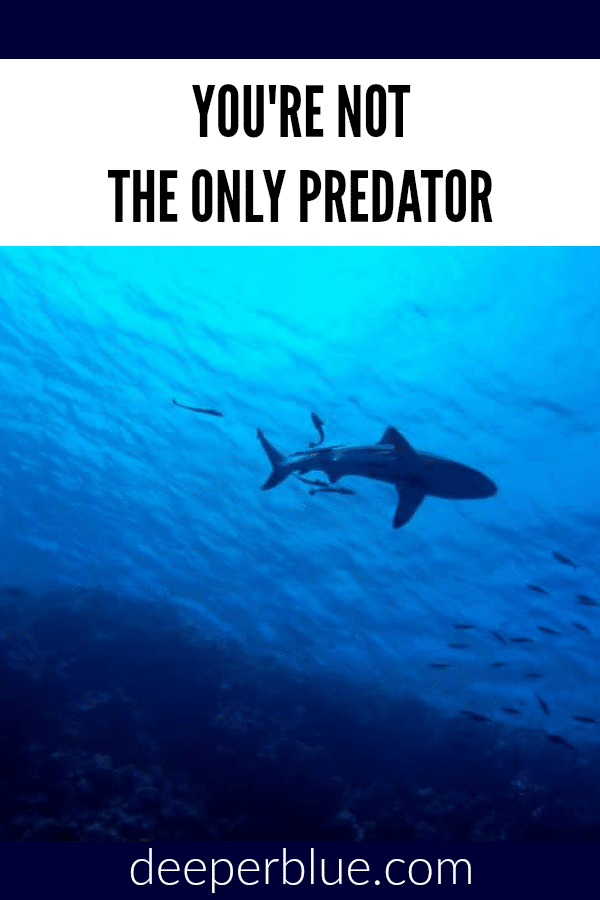 So are you the apex predator? Well there are several big predators out there almost everywhere in the underwater world that easily outweigh us by 2 to 5 times or more and they could take us out in seconds if they so desired, but fortunately, that’s not the case. These predators hunt the same prey that we do, so interaction is bound to happen. We need to spearfish intelligently with enough dive buddies to assist so we can safely enjoy this exciting adventure. By the way spiders, dogs and lightning each killed many more people worldwide last year than sharks.

Sharks top the list of course, but history has shown that they are not really interested in us. The International Shark Attack File (ISAF) has a huge amount of data on annual shark attacks from around the world since 1958. In 2015 there were 98 unprovoked attacks worldwide, up from the previous record of 88 set in 2000. My home state of Florida had the highest number of any state with 30 of the USA total of 59. Unprovoked attacks are mostly surfers or swimmers getting a badge of honor with a nip on a hand or foot, and the high numbers are related to the high population and the size of the warm water coastal areas. Spearfishing attacks usually fall into the provoked category. In over 4 decades diving in Florida, the USA and Caribbean I’ve commonly had sharks come in while I’ve been spearfishing, or they were there before we arrived, but I’ve never been hit, bit or lost a fish to any shark.

Attracting sharks intentionally is not something I would have ever considered doing, but these last few years in Southeast Florida that is exactly what some spearfishermen are up to. Cobia is a prized fish to spear here in Palm Beach County and nearby waters, and they hang out with big sharks as well as large rays. Bull sharks are very common here and spearfisherman are attracting them with chumming and other measures to get shots at cobia. It sounds and is crazy, but I know and have talked to two experienced freediving spearfishermen who were seriously bitten by large bull sharks while spearfishing here in 2015 and 2016. The first was a big 70-year old senior spearo, in April of 2015 off Jupiter, FL, who had seen his buddy shoot a cobia just before his dive. It was a green water day and he dove to around fifty feet when he was hit from behind and bit on the shoulder and ear by a shark he identified as a big bull shark. He’s a tough diver and made it back to the boat with his ear hanging from his head. After 200 stitches and staples, he has made a full recovery and is back spearfishing. Because of the bite location, he is a very lucky man! The second diver was also a big guy who speared a cobia off West Palm Beach, FL in April 2016. He was a 25-year old ex-Marine and was bringing up the fish when he was bitten on the upper and middle arm and wrist by a 7-foot bull shark. He was told by a doctor that his size and his wetsuit were strong reasons why he didn’t lose his arm or his life. A little over 100 stitches and staples and he is back in the water spearfishing as well. The multiple reefs and wrecks along Palm Beach County are in a very compressed area just a couple miles out from the shore with four inlets along about 45 miles of coastline. There is a lot of hook and line fisherman as well as divers cruising the same waters, so it’s little wonder that sharks have figured out that the sounds of boat engines and spearguns firing sound like ringing their dinner bells! There has also been a history of shark feeding in this area that is still occurring today. Be sure to read the ISAF section “Diving with Elasmobranchs.” (Entrained Sharks.)

So who are the other bad boys? I know of 6 divers, counting myself, who has been mugged by Goliath Groupers, mostly being grabbed by the extremities and one by the head and torso, and we’re all still alive and diving! In the USA Goliath Groupers, formerly called Jewfish, have been protected from any harvest since 1990. Before then the largest ever speared was 804 pounds, shot by Don Pinder with a Hawaiian sling in south Florida. Big alpha Goliaths are not easily intimidated by divers with spearguns. They are much smarter than sharks and quickly learn that they can rush a diver after the shot and often steal his prey. The population of Goliaths varies by location but on the Gulf of Mexico side of Florida they are over-run and are rapidly increasing in Southeast Florida and the Keys. Your best chance of winning a tussle with most predators, Goliaths included, is to beat them to the prey and keep your gun in hand. If possible even run them off with a show of dominance before you shoot… easier said than done of course. Puff yourself up and look straight in their eyes and advance towards them. Hold your fish tight to your body, not trolling it away from you, and keep your gun, pole or spear pointed in their direction. I have had to twist away from huge Goliaths like a matador from a bull and I’ve had to poke them and also pull my fish back out of their mouths. It’s a contest over possession of the fish, and if you give it up easily it just excites them and then they want more.

Barracuda can weigh over sixty pounds consisting largely of teeth and muscle and they often pick off a spearos prey before he or she can reach it. I’ve had more trouble with little barracudas that dart in to steal a piece of my catch because they’re fast and they know it. They usually get that one bite but nothing more. That said barracuda are rarely problems for spearfishermen. Oh yeah, don’t dress flashy!

Moray eels have been known to steal many a divers prey. I have lost some fish to these guys because they are the best at getting skinny and sneaking into a reef to reach a rocked up fish before I can even find it, and they defend their new found possession fearlessly. Morey’s have also added a few scars to my fingers, right through the toughest spearfishing gloves available today, and usually while I was still struggling to secure my fish from within a hole and didn’t know a moray was biting into it from the other side.

I once had a big loggerhead turtle lunge more than once for a fish on my spear while I held onto it. My reaction was “Are you kidding me? You’re supposed to be one of the good guys!” followed by “Sorry Mister Turtle but I’m keeping my fish, then he who is strongest wins!”

You wouldn’t think another diver would be a competing predator for your prey, but I’ve experienced other divers deliberately taking wild shots near me in attempts to steal away a fish that I had in my sites and obviously I was close to and saw before they did. Be careful who you chose as dive buddies. A good buddy of mine knows this better than anyone. He was diving on an oil rig offshore from Louisiana and shot an amberjack and had it on his stringer and in his hand while swimming to the surface in decent visibility. He was almost there when unbelievably another diver shot at his fish but missed it and instead speared straight through his ankle! Just so you know, there is no mistaking a fish that has been mortally speared from a green fish swimming by. Adding insult to injury the bad shooter almost drowned him with a very lame rescue attempt. It’s hard to believe, but many of those internet photos of speared divers are probably true! Several of my buddies and I have passed on pulling triggers on dives when the visibility was too poor to be spearfishing. Often you can move a few miles and find clearer water, so it’s not worth shooting when conditions are unsafe.

So we really are the apex predators. I was a little surprised of the low percentage of shark attacks on spearfishermen shown in the ISAF section “Attacks on Divers”, but the graph did say unprovoked shark attacks. And in perspective to all other divers, in general, we are a such a tiny population. With adequate dive and spearfishing training, and using common sense whilst having a well-trained safety buddy or two, we can enjoy the sport of spearfishing with little fear of injury… really!

DEMA Educational Sessions Are Back For 2022