10 Days With The Evil Genius of Freediving – Part 1

Recently I spent 10 days trapped in the lair of the evil genius Ron Smith at Smith Aerospace Corp in Sahuarita, Arizona (yes, that is a solar power array you see on the left – pretty cool). 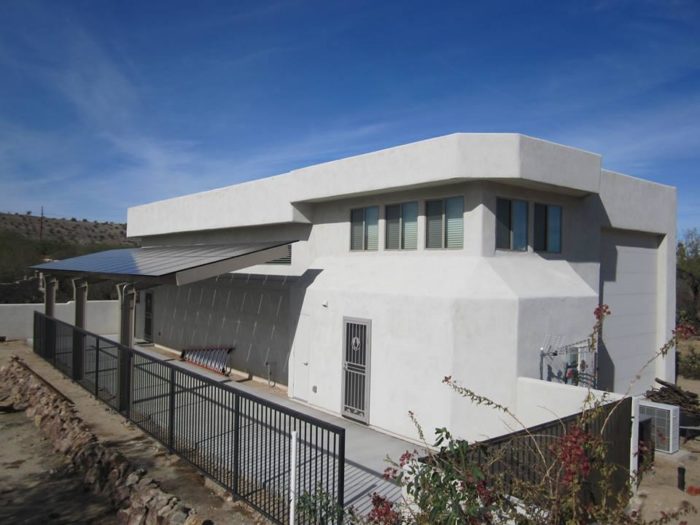 One thing about evil geniuses – they don’t like to be CALLED “evil geniuses,” but I was spared my life after becoming a willing minion. In that capacity, I was forced to endure countless hours in the pool with amazing inventions, endless talk of freediving and monofins, and an unending cornucopia of awesome food. I am sure Ron’s wife was quite ready to throw us out of the house, but I had a great time seeing all of what Ron is doing, and playing with his new prototype monfins, the ORCA 2 and the Pilot. At first glance, they looked like killer ideas. Maybe I can sneak some pictures and information past the censors.

I learned a lot during my time in Sahuarita. I learned to like Mexican food. I learned how to catch poisonous gila monsters. I learned to love strawberry milkshakes (a very shallow learning curve for sure), and I also learned how much hard work goes into making these fins, from the design process all the way through construction. Perhaps the best way to start is through a short trip down memory lane. I hope you find it as interesting as I did.

No great idea materializes out of a vacuum, and the ORCA series of fins and their other DOL-Fin partners are no exception. Ron started out with wooden blades and fin parts and has progressed to CAD design, composite construction, and computer numerical controlled (CNC) plasma cutting for his latest efforts (yes, I had to look that CNC thing up).

Below is Ron’s first fin, arriving on the scene in 1992, with a wooden fin blade and denim (blue jeans) material for foot pockets. Already you can see some advanced ideas – the high aspect ratio fin, the adjustable foot angle, and the flexible rubber fin suspension. You can see the damaged wing, with what looks like to me at least one fiberglass repair.

After a 1993 design did not perform well, this next fin was born in 1994. The body is constructed of aluminum parts, originally yellow, but still using a wooden fin and denim foot pockets. Its wing broke after about 6 months of use, so Ron went back to using his first fin. Then in 1995, he remade this fin in black with a new hardwood maple foil for added strength to resist breaking. He continued to use the fin below until he built the Classic.

In 2000, Ron tried a design using parts from roller blade boots for foot pockets, but did not use it much as the foot attachment did not work very well. Some of the carvings from this fin’s hardware did later provide the genesis for the Classic’s foot plate mold.

This is the Classic, first built in 2002 and later offered to the public in 2009. This was the first of Ron’s fins to use the aluminum foil. Ron kept this fin busy until he developed the HP and ORCA. 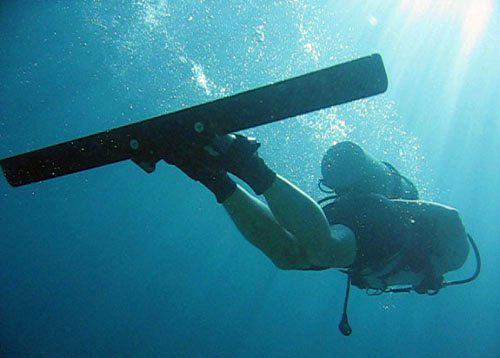 The DOL-Fin HP below came in 2010 and was initially sold to the public in 2011. It was the first to incorporate his current aluminum foil design with folding wingtips. I have never seen one of these wings broken or bent. I tried to convince Ron to do some destructive testing to test the limits a bit, but he claims that it is unnecessary.  Ron says that he “calculated that the foil would have to be moving through the water at speeds above 20 mph (32 kph) before it could generate enough force to bend the aluminum blade.” I totally trust Ron’s engineering, but I will keep pinging on him about this. I hope he may someday have a wing that is banged up enough that he would be willing to use a kinetic energy transfer device (hammer) on it – nothing more fun than breaking stuff, for science, of course.

The ORCA was first seen around the world in competitions in 2010. This is my DOL-Fin ORCA (#002) as it appeared at Smith Aerospace prior to my purchase in 2011. It was the first one offered to the public. This fin design was great, but it was just too time consuming and expensive to make for mass production to be practical. To do it, Ron needed help, but was unable to train workers to do the kind of precision work this fin requires and still remain within budget. As a result, there are precious few of these amazing beauties out there prowling the world’s oceans – not enough, I think, for the ORCA to realize its full potential. 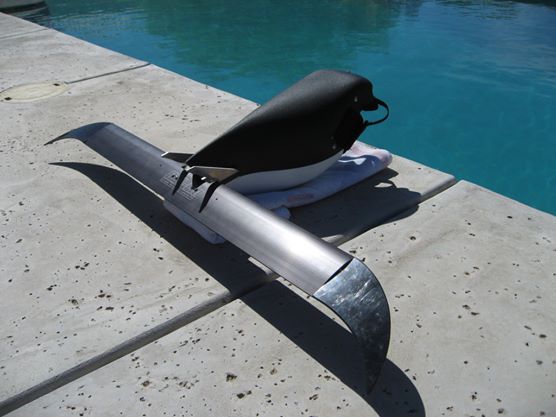 As far as performance goes, I will let the ORCA (with a little help from its friends) do its own talking.

Here is Natalia Molchanova during her 2010 Team World Championship Dynamic in Okinawa, Japan – nothing wrong with a 217 meter dynamic, just shy of her 225 meter world record at the time.

Also, two American records have been set with the ORCA, 172 meters by Wes Lapp at Deja Blue 2012 (picture from Vimeo video shot by Performance Freediving), 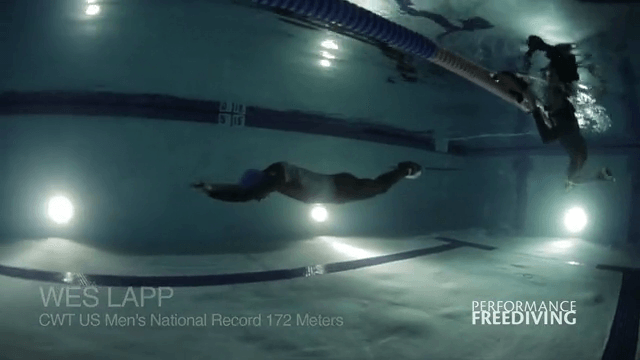 and 175 meters by Ron Smith with this fin at the 2012 Team World Championships. 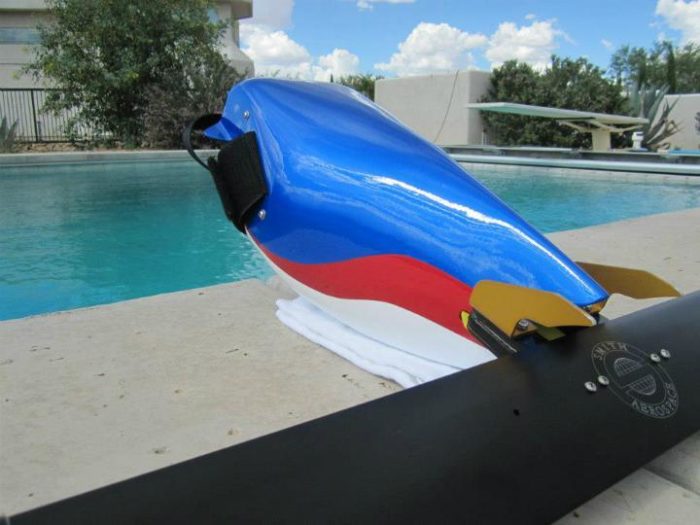 The X-20, developed in 2011 and introduced in 2012, is perhaps the coolest looking and most successful of Ron’s product line. It is also a great all-around fin. There is no greater feeling than powering one of these fins up from the bottom plate!

Next is the new flagship of the DOL-Fin line, the ORCA 2. I got to swim quite a bit in the prototype during my visit. The new fin has all the performance of the ORCA, but is a great deal easier to make and therefore less expensive. I am told that constant weight divers will love this fin. The original ORCA’s negative buoyancy causes it to have a tendency to want to lead you to the bottom plate during freefall unless you add more neck weight to compensate. The ORCA 2’s positive buoyancy corrects that problem and also raises the legs for a more comfortable and efficient pre-dive breathing posture and duck dive position. Additionally, you can drop it in the ocean and not fear your investment sinking to the bottom.

The ORCA 2 also incorporates a new foil suspension system. It has a much more fluid feel than the previous suspension design, and makes almost no noise in the water. The new system has all the benefits of the old system, but feels smoother, looks cleaner, and has no metal parts sticking out to get bent.

The new foot strap design is a big improvement too. Now the main and heel straps are independently adjustable, the metal from the original ORCA straps is gone, and side release buckles are added to the heel straps to allow rapid egress.

The ORCA 2 is an awesome fin. It is as good or better in power, performance, and feel than the ORCA but at a lower price point. Ron tells me that the target price for the ORCA 2 is $300 below the ORCA’s $1500 price tag.

The ORCA 2 is really the culmination in ORCA development. In next week’s article, we will get into the water to give you more of a feel for how this fin flies, but just in case you think that is all Ron has for us, think again, because we will also flight test Ron’s latest masterpiece, the DOL-Fin Pilot. It has the simplest and most elegant design imaginable. Trust me – you can’t wait to see it.

Walter Johnson
Walter is a retired US Navy nuclear propulsion plant operator living in Phuket, Thailand. Freediving became his passion soon after he discovered the sport, and has followed that passion ever since. It enriched his life, leading him into training, competing, coaching, and now even writing.