Yesterday Ashley Futral Chapman achieved the seemingly impossible by diving to 67 meters (223 feet) with just a single breath of air in her lungs. The 30 year old North Carolina native propelled herself into history by setting her third World Record in the freediving discipline of Constant No-Fins.

Ashley is just one of over 50 international athletes competing at the 2012 Suunto Vertical Blue competition at Dean’s Blue Hole in the Bahamas. Futral Chapman, a freediving instructor with Evolve Freediving, sailed to the Bahamas with her husband and coach Ren Chapman over 3 weeks ago, on their sailboat the Nila Girl from Cape Fear in the United States with a very specific goal in mind. The goal being to reclaim Ashley’s world record title from Russian freediving legend Natalia Molchanova. On a dive that lasted three minutes and 15 seconds, Ashley proved that she is the world’s best female in what most say is the purest form of freediving Constant No-Fins (CNF). In this discipline athletes use only their own hands and feet to swim to unimaginable depths, in this case for Ashley to an astounding 223 feet. 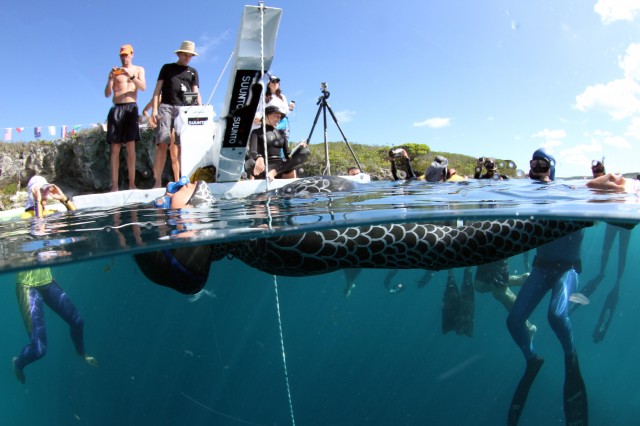 “ I knew I had the dive in me,” said Futral Chapman, “I executed the dive twice before in practice with ease. I just needed to get beyond the pressure that comes with announcing a world record and it being the first day of the competition. My greatest strength in training has been my husband Ren who is my safety, my coach, my life partner — he takes care of everything else so I can simply just perform the dives I need to do.” In the days leading up to Suunto Vertical Blue, that support sometimes included hiking 50 miles roundtrip on a daily basis from where their sailboat was moored on the northern tip of Long Island in the Bahamas, to train at the blue hole closer to the southern end. “I also want to extend a big thanks to both William Trubridge and Miguel Lozano,” Ashley explained, “They both gave me terrific guidance to overcome a few hurdles I was experiencing with equalization. Their insights made a huge difference for me.”

On day one of the 2012 Suunto Vertical Blue the chance to peer into a universe of incredible physiological demands and mental strength was recognized in Ashley’s world record as well as an amazing six national records set for Japan, Venezuela, Israel, Tunisia, France and the Unites States with the promise of much more to come from Futral Chapman & her fellow freedivers as they explores the ocean’s depths — the last frontier of human possibility.

Accompanying Ashley is an international field of competitors, all descending into the abyss of Dean’s Blue Hole – the world’s deepest known blue hole of seawater. Plunging 202.997 meters (666 ft) in a bay west of Clarence Town on Long Island, Dean’s Blue Hole provides the perfect back-drop for the final event in the AIDA World Cup of Freediving.

For the first time, Suunto Vertical Blue is streaming LIVE via the internet so that people around the world can listen in to hear in real time how every athlete is performing. Enthusiasts are encouraged to also follow the action on Facebook and Twitter for up to the minute photos and videos of the event.