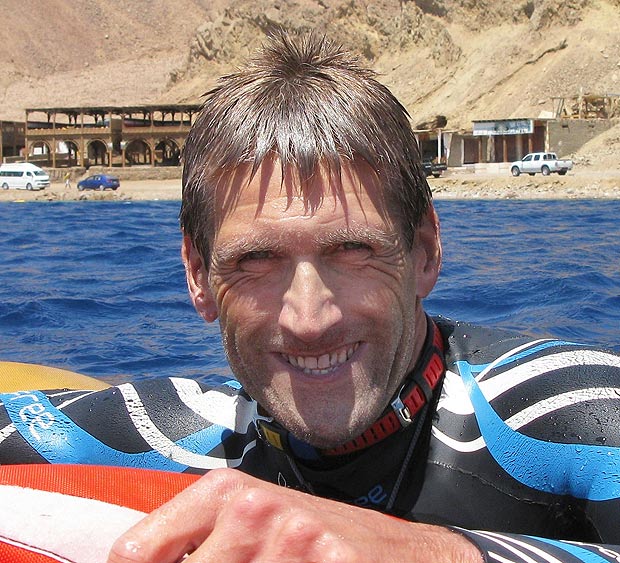 On 6th October 2014, the British national record for Constant Weight No-Fins was pushed ever deeper. UK native Dave Kent beat his own previous Constant Weight No Fins (CNF) national record by descending to 73 meters on single breath and using only his hands and feet. In fact Kent had already beaten the record a week earlier (at the Little Blue Hole competition in Dahab) by 1m. (Dave’s previous national record of 70 meters was set in July of 2013, also in Dahab.) But the road to success for a Kent has not been categorically easy…

I came out to Dahab on the 20th August with not the greatest preparation, as 1 week earlier I cracked my head open which required 3 stitches.  I had these removed the day before my flight.

I had planned on 10 training days, spread over two and a half weeks, ending with my record attempt on the 6th. However, since there was a competition happening that first week I used it as a warm-up, a practice attempt if you will.  Now in hindsight, I wish I had announced a much deeper dive. The competition date was 30th August.  I announced 71m, as I just wanted to get a white card.  The dive though was by far the easiest competition dive off my life.  Completed in 2 minutes and 28 seconds, very comfortably. Unfortunately in the time between this dive and my next competition on the 6th September, I caught a touch of the ‘Dahab Bug’ which clearly affected my final announced performance (AP), which ended up being 73m.  The next dive was still quick, two minutes and :35 seconds, though I had clearly lost a bit of  my strength, and it showed during my performance that week.

Never one to shy away from goals, Kent has his next feat in mind

I feel very confident about a competition doing an 80m plus CNF dive in 2015.”  Dave attributes his success to three things, “1) My dry strength and conditioning training programme; 2) the weekly use I have of a 4m dive pit with my local scuba club Sovereign Aquatrek; and 3) the equalization dry training program that I have developed having worked over the last 12 months with the likes of Jonny Sunnex; Andrea Zuccari and Aharon Solomon.  What used to be the weakest part of my dive is now my strongest.  For both dives I set my alarm at 21m to charge the mouth-fill, and this took me comfortably to the plate each time.  I also need to thank my good friend and coach when I am in Dahab, Brian Crossland, for amending the finer points in my technique, and the calmness he brings every time I hook on the line.

The effects of the COVID-19 pandemic will last well into 2021, with organizers of the DC Dive Show in Washington, DC announcing recently that "all show plans for 2021 have been canceled."
Read more