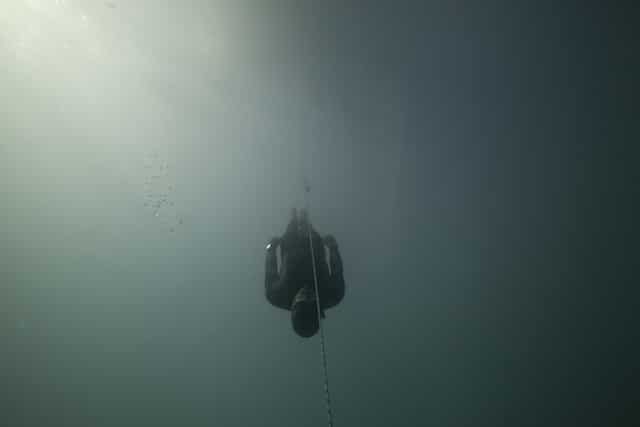 The second day of William Trubridge‘s annual freediving competition brought some even deeper dives than the day before, if little to no changes in visibility. Out of the 17 athletes in the line-up, a total of 12 received white cards and four new national records were set.

Michele Tomasi of Italy completed a clean no-fins dive to 71 meters in two minutes and :43 seconds to secure his first national title. “I felt very comfortable today,” said Michele, “71 meters is a personal best for me and CNF is favorite discipline!” Tomasi plans to push his limits during the remainder of the comp and try for new PB’s in both FIM and CWT as well.

Shortly after Tomasi’s triumph Veljano Zanki set a smashing new record for Croatia in constant weight. Having lived through the demise of a noodle-ridden disaster from the day before Veljano had his revenge and a great success on day two, diving 103 meters under constant weight with a total dive time of three minutes and :10 seconds.

The third record-setting dive of the day was offered by the “golden retriever” of Russia, Alexey Molchanov. Alexey demonstrated that he is a contender for the top title of Suunto Vertical Blue 2013 with his CNF dive to an astonishing 91 meters, just 10 meters off the no-fins world record which Trubridge holds. “This was the first day of the comp for me,” explained Molchanov. “I did not feel 100% because I only just arrived from Europe. So I really hope my performances will get better over the next few days! Watch the video of Alexey’s 91m CNF dive, which took three minutes and :36 seconds to complete, here below.

And last but not least Yaron Hoory of Israel provided the fourth record of the day with a free immersion plunge to 82 meters. “I hadn’t trained FIM this year and only did one training dive to 75m a few days ago so I was a bit apprehensive before the dive but I decided to go for a national record and just do 82m,” shared the normally more conservative Hoory, but this time making a gamble paid off.  “The dive was good, a bit long, but I made it back just in time to give a clean protocol!” Admittedly the newly married Yaron did have to fight a little to make it through the surface protocol after completing his FIM dive in three minutes and :20 seconds, but in the end he won and improved his own Israeli record by one meter.

Greece's Christos Papadopoulos and Japan's Natsumi Mitsuno came out on top overall in the men's and women's divisions of their year's Infinity Depth Games off Larnaca, Cyprus.
Read more
Freediving

Discover the risks associated with freediving in caves.
Read more