As my head broke the surface I immediately knew there was problem. Our Extended Range instructor and one of the students were lying on the tubes of the Zodiac, breathing O2 and appeared not to be moving. We doffed our gear and jumped into the boat, where we noticed that both divers where conscience and relatively comfortable. Amazingly both divers had survived an aborted deco from a dive approximately 180ft/60m for a total bottom time of about 20 minutes. The student had trouble venting gas from his wing, the instructor got involved and both were subsequently dragged to the surface. No attempt was made to recompress in water, instead both divers exited the water and opted to breathe O2 on the boat until the assistant instructor and I returned from our deco. The Coast Guard was notified and would meet us at the dock, which was only 10 minutes away.

Both divers were being closely monitored for the inevitable signs of Decompression Sickness, which thankfully never materialized. By the time we had reached the dock and unloaded, both divers were feeling better and on their feet. They decided to go to the hospital and get professionally checked over, but not to wait for the Coast Guard. They were notified that the situation had dramatically improved and that their services were no longer needed. By later that same evening both divers had been checked out and told it was safe to go home.

Approximately two years later I assisted another diver with a mild case of Type I DCS, who got hit after a second dive to 60ft/20m. In this case the diver had done one uneventful 60ft/20m dive for 40 minutes and did a second 60ft/20m dive about an hour or so later. On the second dive he had lost control of his buoyancy after about 30 minutes and bounced to the surface from about 30ft/10m. The DCS symptoms didn’t really start to manifest themselves until later that evening when the diver was at home. After an uncomfortable night and the discovery of a large rash on his abdomen the next day he decided to talk to me to see if this could be DCS.  I was a co-worker and also an ERT (Emergency Response Team) member who had access to O2 and other first aide equipment. Hearing the story and recognizing basic Type I DCS symptoms, I immediately put the diver on O2 and transported him to a hyperbaric chamber where, happily, he made a quick recovery.

It was these two incidents that, for me, emphasized the fact that decompression is a very mysterious animal and can vary dramatically between individuals. I realized that the algorithms, tables and the other deco aides cannot possibly fully understand what is going on inside any one person, and how they must be made very generic and wildly conservative to account for the diving population as a whole.  Granted, it was most likely the quick intervention of O2 that separated the first incident from the second, however, the physiological make up, fitness level and predisposition to DCS of the divers could not be overlooked. Ultimately I was less willing to trust blindly any computer, table or deco algorithm and wanted to understand better the deco process in relation to human physiology. 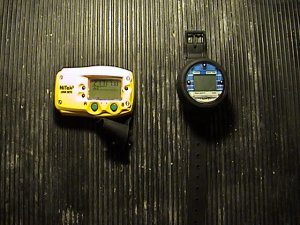 The way I dive now is radically different from my earlier years, my increased understanding of decompression coupled with better physical fitness; minimalist gear configuration, proper gas mixtures and team work have greatly enhanced my enjoyment and freedom in diving. One of the biggest changes, or leaps of faith, was the elimination of a wrist/console mounted dive computer, now instead I use a bottom timer, dive tables and complete dive planning.

Dive computers can be useful if you just want to do a series of multi-day air dives and staying well within accepted decompression limits. They allow for simple fun diving but do have disadvantages that can pose problems for an inexperienced diver.  Computers reduce the amount of dive planning needed to do a dive, so a failure may leave an unprepared diver no choice but to “wing it”.  Even when divers are wearing identical computers the schedules they output may be different because of slight variations in depth, time or number of dives done that day. In my opinion this is the most insidious disadvantage because an inexperienced diver may choose to follow their own computer, rather then staying close to their buddy, and slowly become separated in the water column. The buddy may even be close but a diver’s attention could be more focused on the computer causing a lack of awareness.  In either case a diver may fail to notice that their buddy is in trouble.

When entering the realm of technical diving most diving computers offer no advantages at all to a diver. They do little to make a diver better or ready for more advanced dives, usually do not account for multiple gas mixes and often have annoying bells and whistles telling you that you are doing something crazy. Most importantly, like in recreational diving, increased dependence on a computer reduces the need for proper dive and contingency planning. 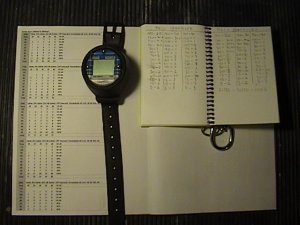 Diving unplugged forces a diver to rely on the “computer between the ears”, which is far more dependable then a black box on your wrist.  It requires you and your buddy to plan your dive ahead of time; agreeing on decompression schedules, turn time, max depth, contingency plans, etc. These plans can be entered on a slate or wet notes taken with the diver and referenced when needed. It guarantees that you and your buddy are using the same plan throughout the dive, allows divers to stay close to each other and allows for quicker spotting of issues since both divers should be doing the same thing at the same time.  Most importantly it forces you to understand the dives and your body at a level you would never achieve by depending solely on a computer.

The proponents of computers often argue that a computer gives you more freedom because any drastic unexpected changes in a dive plan can be calculated instantly and the deco profile altered on the fly. This is true, to a point; the big problem occurs when dives/deco need to be abbreviated or aborted because of low on gas, medical issues, dry suit floods, fatigue, toxing, weather, whatever. In these cases a computer will not understand that you need to reach the surface as soon as possible and will complain that you are flying through your deco schedule, possibly adding to the stress level of an already stressed diver. Once the problem has been dealt with a diver may have the option of going back and redoing some of the missed deco to reduce any chance of injury, however, many computers will go into a lockout mode or think it is another dive and pad the schedule more then necessary.  In these situations a diver is back to using the “computer between the ears”.

As a diver gets used to diving within a certain depth/time and using the same deco schedule for that range, they will soon come to recognize familiar feelings within their body for each phase of the dive and post dive. Any variation from this norm may mean that a diver has done something wrong or, potentially, has done something more correct. In some cases it may mean on that particular day they could have been dealing with other issues like cold, dehydration or fatigue, etc.  When a diver comes to understand their body in relation to a particular type of dive, they now have a “barometer” in which to gauge the dive and improve upon existing deco schedules and practices. However, this understanding only comes from the repetition of doing the same plan for the same (kind of) dive, not from the day to day randomness of following a dive computer. 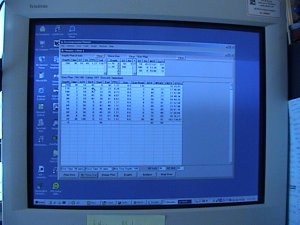 The best use of a computer in diving is via your PC or Palm Pilot. Here you can run various decompression programs, cut tables for different gas mixtures and do virtual dives to check out the “what if’s”.  You can alter things like gradient factors, conservativeness, deco algorithms, gas mixtures and a myriad of other options to help you fully understand how these factors interact (or at least within the program).Also, if you are reading this article I am sure you know, the Internet is a vast storehouse of diving knowledge with many sites displaying the planning and background for a large number of dives. Many sites have scuba forums where a diver can post questions, browse archives or get in touch with divers around the world.   The internet is the biggest diving resource today and will enhance a diver’s knowledge and dependability far better then a black box on the wrist.

Here are a few of the sites that have helped me over the years.  I use substantially more then is listed, but these are the ones I go to on a regular basis.