I can clearly hear Al Pacino’s voice loudly reverberating from his “Inch by Inch” speech in the sports film “Any Given Sunday“. Yesterday during the men’s heat for Free Immersion (FIM) at the AIDA Individual World Championships the fabled “Sunday Surprise” came true.

Not only were there a total of 12 disqualifications, (a troubling trend of red carded performances) but freediving fans around the world were expecting a leaderboard consisting of Molchanov, Boudhiaf, and Trubridge (and likely in that order)!

What manifested instead was a big surprise to all of the athletes and the viewing public; for some a pleasant surprise! For others more contention around AIDA rules.

In a surprising turn of events, William Trubridge of New Zealand took home the gold medal for an early-turn dive resulting in 111 points for an announced dive of 116m where he demonstrated prudence in sticking to 114m to take care of his ears. Fellow Vertical Blue Instructor Dean Chaouche of Great Britain looked strong in delivering a clean 98m performance. And Christmas came early for Adam Stern of Australia who set a new national record with his white card dive to 92m, in a tie with American Brandon Henderickson who matched that depth.

The deepest announcement, however, came from Alexey Molchanov of Russia at 121m. Alexey felt good about his performance. “Dive was great, felt confident and very deep” and at 121 meters it was the deepest dive executed but an issue with Molchanov’s surface protocol stymied what was imagined by many to be a sure thing.

“Other than that, it is up to AIDA to see what they want to do with judges and rules. Personally, for me, this red card for an “OK” that wasn’t really in their direction doesn’t mean anything. Everybody knows how strong and confident my dive was. It should be AIDA’s responsibility to provide an (athlete) user-friendly service; so far it is not.”

In reference to his own dive William Trubridge had this to say:

“I announced a conservative depth because both conditions for FIM and my performance have been a little patchy. This morning I felt strong though and was held up about a meter above the plate when one ear suddenly locked up. It must have had a little bit of mucus trapped or something. It happens to me very rarely, but I don’t like to ride my ears when it does, especially when there are still two disciplines to go in the World Champs. I knew that I was deep enough to guarantee a bronze medal when I turned, but I was still pretty frustrated, and pulled hard a few times on the line before I told myself to chill out and relax for the rest of the ascent.”

A stunned Adam Stern decided to not look the gift horse in the mouth!

“I’m over the moon. I never expected to medal in this discipline with the caliber of free immersion divers at this competition. But more importantly, it was the first free immersion dive I’ve done in my life that I genuinely enjoyed.“

Brandon Hendrickson of the United States got the surprise of his life when he heard he qualified for bronze with Adam Stern of Australia in third place.

“Regarding my 92m free immersion dive in the world championships; in the days prior to the World Championships, I had definitely been a little nervous. I had significant sinus inflammation in the preceding comp (the Caribbean Cup) which caused me some difficulties in training and with my target dives. Fortunately, I was still able to manage a 90m FIM during the Caribbean Cup but after I took several days off to let my body and sinuses recoup. I never dreamed I’d have a chance at a bronze medal with such a talented roster of athletes present. A dream come true!!!“

Congratulations to all of the athletes for their tremendous efforts and persistence. There are still two more disciplines to go so stay tuned as the wild ride of the 2017 AIDA Individual Freediving World Championships continues.

Check out the final standings below. 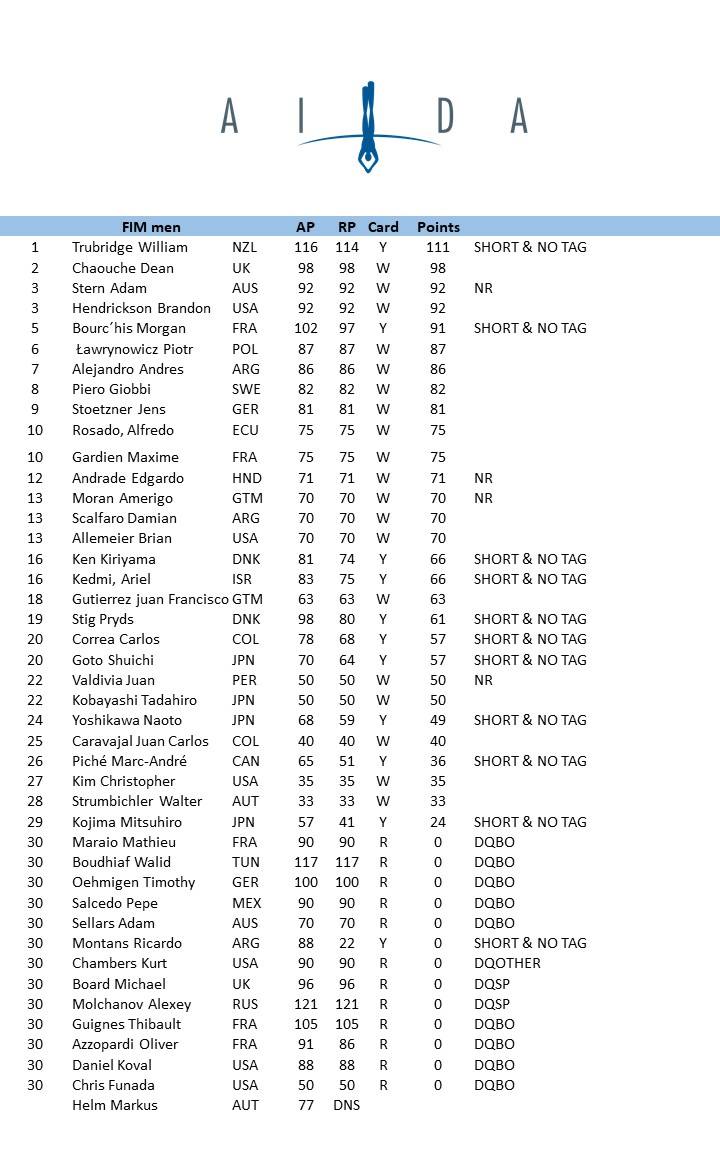