Saturday, September 2nd was the final day of competition at the 2017 AIDA Individual World Championships. For organizer Esteban Darhanpe it represents the culmination of a tremendous effort to successfully bring the very first AIDA world championships to Roatán, Honduras. He should be proud of how everything turned out; especially being able to provide the perfect setting for the true titans of freediving to compete head-to-head. The final act of this masterful aquatic theater did not disappoint, revealing a serendipitous end to a very dramatic event.

Alexey Molchanov and William Trubridge gave the people a thrill as they both completed clean dives to an astonishing 90 meters in no-fins. And Morgan Bourc’his completed the winning trio (as expected) securing the bronze, and taking home (for potentially the last time) a well deserved feeling of accomplishment for this medal.

“I did not want to brag about the bronze I received for CWT because I knew that some of our sport’s greatest athletes like Samo Jeranko and Goran Colak, as well as others, were not in Roatán to participate,” explained the humble Frenchman. “I am much happier with this medal! I know what it represents this time — pure performance. I am a lucky guy. Taking home two bronze medals is good for my mindset, my visibility in France, my sponsors but all medals do not have the same taste. This bronze medal for CNF tastes so much better. This may be my last World Championship so it’s a nice feeling to end on such a good dive.”

With the retirement of Guillaume Néry (Mr. Smooth) in recent years, and now the impending departure of Bourc’his (Mr. Perfect) it’s a good thing the “French Mafia” can rely on Rémy Dubern to continue the tradition of excellence in apnea. Dubern (aka Dreamy) achieved the fourth deepest no-fins dive at 77m and has the heart, humor and reserve to take on the mantle so well designed by Néry and Bourc’his. Not to mention the French contingent was the largest in Roatán so there will be others as well.

For Alexey Molchanov of Russia there were different considerations.

“I picked 90 meters as my final announcement as it was a dive I knew I would be completely confident doing, but still near my limit,” said the already once-crowned-in-Roatán world champion. “I would have liked to have announced a bit deeper in this comp, but I really could not because I did not have the perfect preparation for CNF. So I was just planning to go as deep as I could still bring home a white card. And I definitely didn’t think I would be on par with the deepest. I imagined that Will might go for 91 or even 92 meters.”

But as luck or Neptune would have it both of the world’s best would be evenly matched in pursuing 90 meters to take the gold.

“Coming into the dive, I was still smarting at the disappointment of missing out by 0.2 of a second in getting bronze in CWT and the possibility of an overall gold medal in the event. So it was ‘extra’ important to me that I finish the championships on a positive note,” William shared.

“I thought Alexey and Morgan would be conservative in their announcements, and that 90m would suffice, but Alexey announced 90m also, and I heard the judges giving him a white card in the last 2 minutes of the breathe-up to my dive. With all the extra pressure of this, and of diving the last dive in the event I clear forgot to fill my mouth with air to equalize with at 30 meters on the way down. This almost cost me the dive, but I just managed to squeeze enough air into my ears to get to the plate and grab the tag. Coming up was much more trouble-free, and after I took the first few strokes I knew it was going to be a clean and easy dive. Somehow it was also the fastest 90m dive I’ve done, at 3min 16sec, so I must have been very keen to get to the surface and start celebrating!“

And celebrate everyone did as Trubridge delivered his protocol on time and more than ready to receive an affirmative answer from the judges. What is of interest (IMHO) to note is that during the ascent portion of the dive there seems to be quite a difference in the number of arm strokes for each of the podium-placing athletes: it took Alexey only 24 arm pulls to ascend (but a pretty long dive time overall of 3:54,) whereas it took William 29 arm strokes, and Morgan topped out at 37 arm strokes on his way up). 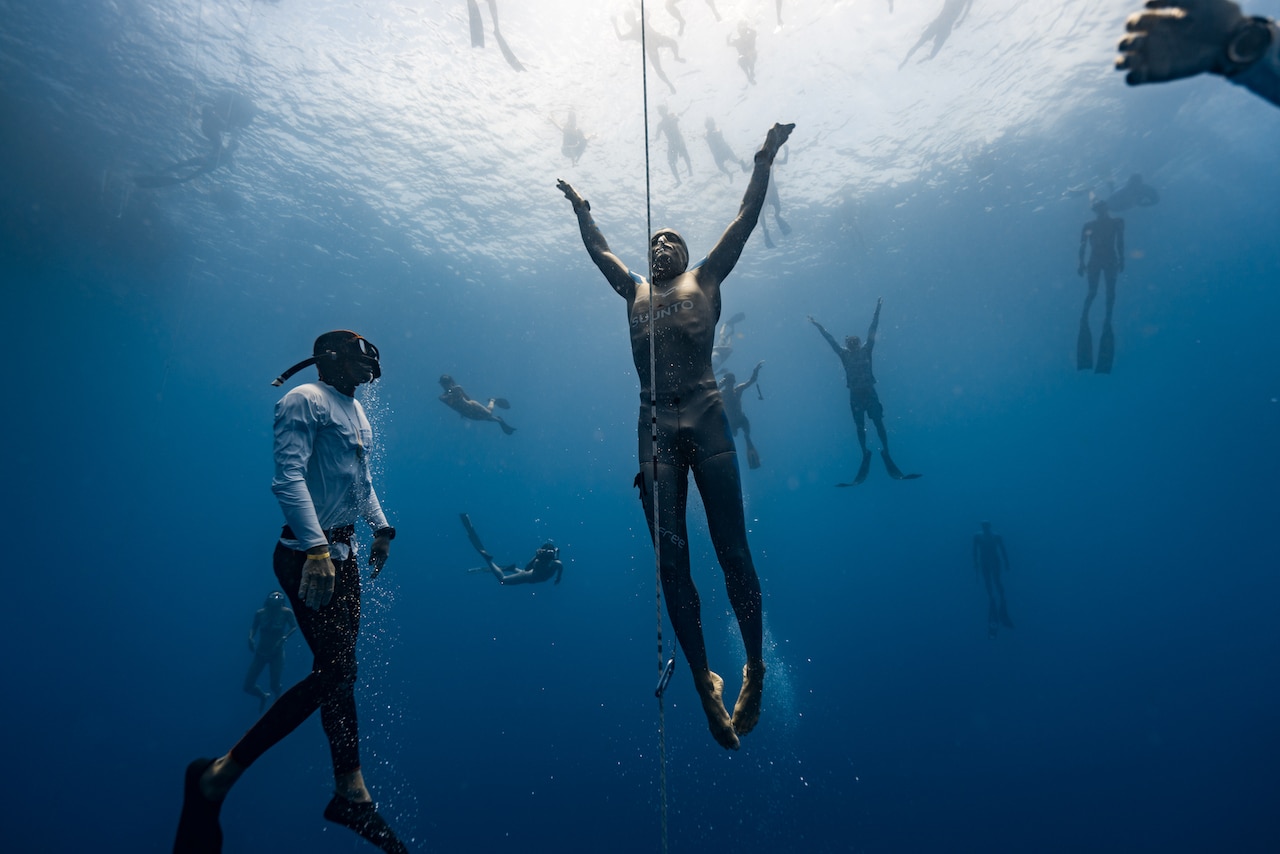 So the competition ends on a fantastic note for William and all of the athletes, safeties, crew, and judges involved. DeeperBlue.com offers a hearty congratulation to all.

Elon Musk Wants You To Go ‘Scuba Diving On Mars’… Or Does He?