Molchanov Wins the Coin Toss and Keeps His World Record

Russian freediver Alexey Molchanov has done it again. On the last occurring Saturday in November, Alexey improved upon his own World Record in Constant Weight (CWT) by one meter to set the plate a little deeper to 126m at Suunto Vertical Blue 2012. In a clash of the “Neptunes”, extraordinary depth announcements made by both William Trubridge and Alexey Molchanov stunned the freediving community as both athletes announced they would dive to an unimaginable 126m in CWT on the very same day. A coin toss ensued, which Molchanov won and down the line first he did go. Freedivers and fans around the world could almost be heard audibly gasping in unison as they wondered to themselves: Who will take the world title? Which champion will successfully hit the mark nearly 420 feet into the abyss of Dean’s Blue Hole? Might one of these competitors black out?

Anticipation also ran high amongst the spectators on the shore and at the surface at the event in the Bahamas as the gazed upon the two aquatic gladiators warming up simultaneously on opposite sides of a smaller platform. 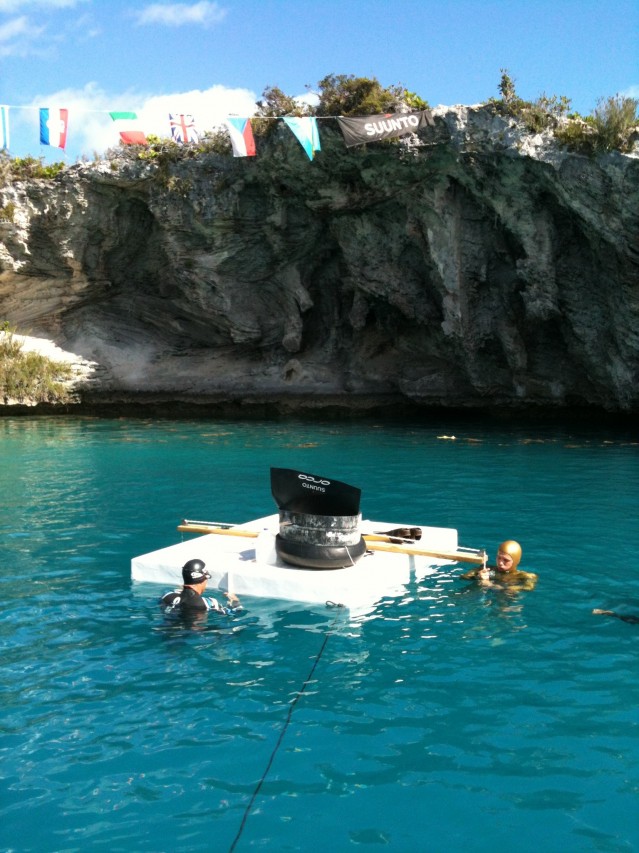 In the end a failed alarm foiled Trubridge’s dive and the formidable but humble host of the last stop on the AIDA world cup acknowledged Molchanov’s incredible performance, “Alexey Molchanov set an amazing world record of 126m this morning, but I couldn’t join him today.” Alexey was very calm on the main dive platform as he collected his thoughts and composed himself for an epic descent. As he gently slipped into the water and moved over to the line, everyone watching knew that either way history was about to be made.

Wearing no dive weights, a golden wet-suit, a simple nose clip and no protective eye equipment Alexey successfully complete his dive to 126m in 3 minutes and :46 seconds. Capable of a breath-hold in excess of 8 minutes and :31 seconds, barring any equalization issues Molchanov has the capacity to go even deeper.

There are five more days in the Suunto Vertical Blue competition, but today is a rest day for the two “Neptunes“. DeeperBlue.com readers can LISTEN LIVE to the internet streaming to hear all of the fin-tastic action happening instantaneously, and stay tuned to see who will push deeper, perhaps Trubridge is contemplating 127m now…