Monofins For Freedivers: Part I

We have been intermittently following the debate concerning the use of the monofin in freediving and would like to share some of our findings.

Two years ago we put together the first experimental monofin/freedive clinic where we assembled some unique elements. We put together the leading trainers in monofin swimming, namely, the Russian coaches from Tomsk University (who train both the Russian national team and their chief rivals, the Chinese), the leading specialist monofin manufacturer, and a representative panel of freedivers ranging from elite competitive level to raw novice. The group included advanced freedivers who already had experience with the monofin, advanced freedivers who had never used a monofin and a novice freediver with no experience of the monofin.

The objectives were to find:

What style and why?

We’d heard a lot of talk concerning adaptations of the ‘Classic monofin style that freedivers should adopt. I know from personal acquaintance that some of the people recommending various adaptations are not capable of demonstrating a good classic style, and so their recommendations were from lack of ability in the monofin and thus reflected lack of choice through limited ability. One does not have to be a professor of hydrodynamics nor be on intimate terms with Newton’s Second Law, Reynold’s Law and the Law of Laminar Flow in order to work out that certain of the adaptations don’t make sense.

Three persistent faults, which seem to be common, are:

Lets keep in mind what the ‘Classic’ position was developed to achieve.: 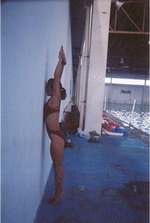 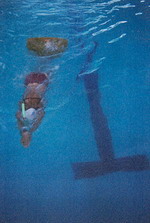 In the ‘Classic’ position the arms are locked straight above the head, with the biceps in full contact with the back of the head ( hugging the ears), one palm placed on top of the bottom hand, fingers extended but pointing down, the thumb of the upper hand locking the bottom hand in place. The wrists are held at about 15 degrees bent down in the line of travel.  The head is straight, but the chin is slightly tucked down. The arms, in this position, serve as a counterbalance to the undulation of the rest of the body, as well as providing the best hydrodynamic presentation to the water. In a correct movement, for example when surface swimming the arms remain straight and extended at all times and hardly leave the surface at all, i.e, no dipping down on the downstroke of the monofin. An easily-observed, common mistake to avoid occurs when a beginner monofinner’s head, front snorkel, and fingers disappear below the surface by up to half a meter or more when trying to swim forwards in a straight line!

Another common fault is what we call the ‘Clockwork Butler’. Those who (due to stiffness in the shoulders and upper back, are incapable of achieving the ‘Classic’ position with their arms) use the hands-down position, with their arms against their thighs, somtimes achieve a movement reminiscent of a butler welcoming a line of fast-moving guests. In contrast, the Russian technique in the hands-down position is with the hands clasped in front of the groin and the shoulders hunched and rounded slightly  so that the whole upper body with the head resembles the front half of a pilot whale. When surface swimming using this technique the art is to see that the snorkel never disappears under the surface and, ideally, nearly the same amount of snorkel is visible above the surface the whole time. As the downstroke is initiated the shoulders, neck, and extended arms lift rather than sink.

Next Week: We get deeper into it, get rhythm and slice the blade issue several different ways.