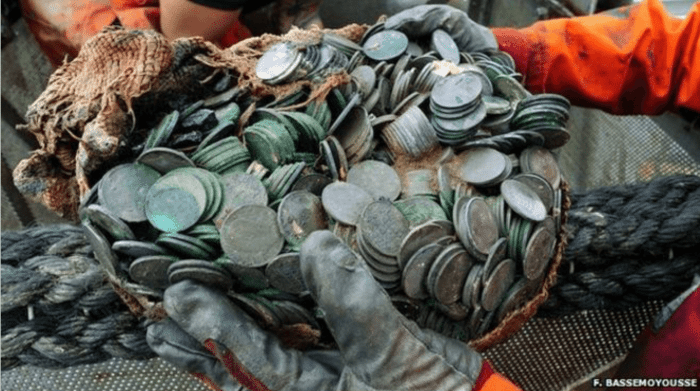 A treasure trove of Second World War-era silver coins has been recovered by a British-led salvage team from a cargo vessel sunk in the South Atlantic.

Operating from its 75-meter-long survey vessel, the SV John Lethbridge, Deep Ocean Search (DOS) recovered about US$50 million — UK£34 million/€47 million — in silver rupee coins that were being transported from India to England to help fund the war effort in November 1942 when a German U-boat torpedoed the SS City of Cairo, sending the ship to the bottom of the ocean several hundred miles south of St. Helena.

The depth of the recovery — 5,150 meters — set a new world record, according to the company.

DOS had to overcome a myriad of technical challenges — from the massive pressure, cold temperatures, and multiple dives to such a deep location, which “resulted in multiple breakdowns of systems such as we had not experienced before when working in 3000 – 4000m depths,” the company said.

Other than the silver coins, the only other object recovered from the area was the aft section of the second torpedo that sealed the SS City of Cairo’s fate.

The recovery work took place two years ago, but the British Ministry of Transport — which contracted DOS to search for and retrieve the treasure — only recently gave DOS permission to announce it, according to the BBC.