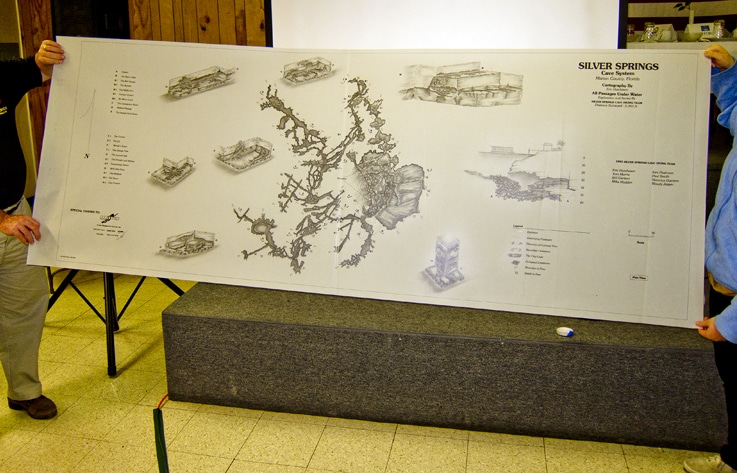 The National Association of Cave Diving, NACD, of the US hosted its annual cave seminar the weekend following the DEMA conference.  The event brings together cave divers from all over the US and the world to share experiences and to listen to presentations.  The theme of this year’s conference was Sacred Waters.  Exploration, safety, research, health and safety, and the annual members meeting were on the agenda.  The highlight of the event was the reintroductions of Eric Hutcheson to the modern cadre of cave divers.

Eric is well known as a cave cartographer that is more artist than traditional mapmaker.  He began his work in the 80s and continued through the 90s.  He gained most of his renown with his work on the Nohoch Project in Mexico.  Although, more impressive was his work in Silver Glen and Silver Springs in Central Florida.  The grandson of a famous architect that designed much of Miami’s well know art deco buildings and bridges of the 40s, Eric was introduced to the concepts of design and perspective at an early age.

Eric presented the history of his work.  He would do initial survey, come up with a working drawing based on the survey and the numerous sketches he made on many slates, and then produce his final works.  The highlight of his presentation was the first public presentation of the originals of his well known maps.  Eric was choked up several times during his presentations while remembering friends lost and the work that included them.  He finished his presentation by letting the audience know he is back to cave diving.  A motorcycle accident took him away from the sport for a decade.  He is ready to come roaring back.

PSS has announced an extension to its complimentary eLearning and certifications program through the end of 2021.
Read more
Scuba Diving

The women of Fourth Element get personal with the Size Matters campaign, donning their own kit and stepping in front of the lens to help customers find the best fit.
Read more
Scuba Diving

A scuba diver from Egypt is claiming he set a new record for the world's longest dive by staying submerged for 145 and a half hours.
Read more