The Telegraph Journal of Canada reports how officials told of a lobster fisherman playing an important part saving an entangled humpback whale off Grand Manan.

The whale measured 12-metres and it was finally freed on Wednesday morning after spending the night tangled up near Gannet Rock by lobster gear wrapped around it and anchored to the sea floor. 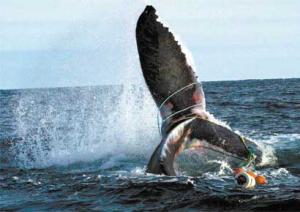 The whale was reported by an unnamed fisherman who found the animal tangled in his gear. The fisherman stayed with the animal until the rescue team arrived from the Department of Fisheries and Oceans Southwest New Brunswick Area. He used pictures supplied by the fishermen’s association to identify it as a humpback. The whale was too stressed and tired to dive, so it stayed on the surface and swam in a fairly tight circle as the fisheries boat followed, trying to get close enough for the rescuers to reach out and cut the ropes.

It as reported as difficult as the ropes were wound tightly and thickly around the whale, but he said the rescuers managed to cut off every single rope.

Humpback whales, found in oceans and seas around the world, typically migrate up to 25,000 kilometres each year. There are an estimated 70,000 worldwide.

Dolphins Learn Each Others’ Names To Make Teams