A picture that took nine years to obtain and was almost deleted at the last minute has won the Shell Wildlife Photographer of the Year award.

Goran Ehlme’s shot of a walrus feeding on clams on the sea floor is a whirl of grey; the animal’s face is seen poking through a cloud of disturbed sediment.

He caught the magic moment on a digital camera and deleted many unwanted shots.

"My finger was poised to delete this one too, and then I noticed something special," he told the BBC News website.

The competition has become one of the most prestigious in world photography. 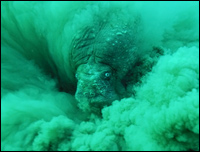 It is organised by BBC Wildlife Magazine and London’s Natural History Museum. This year brought more than 18,000 entries from 55 countries.

Goran is a highly experienced natural history filmmaker. His work has featured in the BBC’s Blue Planet and Planet Earth series, and on National Geographic TV.

The Swede has spent almost a decade getting to know the behaviour of the walrus and how to get close to the mammal without being attacked.