When planning an expedition and only having a window of a week to get out there and dive the wreck is always a bit of a gamble. The ever changing Kiwi weather always makes for a challenge when predicting a suitable time to execute a dive of this magnitude. Our objective this time was to simply learn a little more about the wreck and how intact she was.

This expedition was nice and small and intimate.  There were only two bottom divers – Simon Mitchell and myself and three support team members.

Rex Tonks was the skipper of the “Mother Ship” and Master chef, Willie Heatley manned the 8m surface support RIB and Geoff Payne was our Support diver. A compact but highly efficient support team. Geoff and Willy led the support team on our initial Niagara expedition in 2001.

We sat round at Rex’s house a few hours south on the main land waiting like expectant mothers round the weather channel on the VHF. The forecast did not look rosy!!! The decision was made to sit tight and wait…… The Sunday morning greeted us with calm sunny conditions. Bugger! We could have been out there!! So all hands were on deck to get supplies sorted, gear ready and loaded. Later that day we were steaming out for the Hen & Chicken  Islands ( the closest islands to the Niagara site) All we had to do now was wait! The waiting was made exceptionally manageable by being constantly fed by Rex. This guy is a machine in the kitchen! Who makes bread on a boat??? Rex does!!!! It wasn’t till Tuesday when things started to happen.A window of opportunity opened and we took it! It was all go. 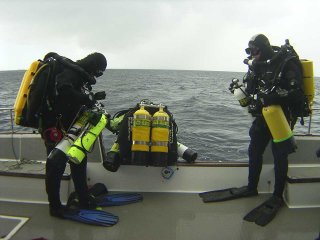 We sat just below the surface for a few minutes holding onto the shotline just rechecking gear and getting ourselves nice and relaxed for the descent. The signal was given and Simon and I made for the bottom. Both of us were diving Closed circuit rebreathers. Simon had the Mk 15.5 and I had an Inspiration. Doing such a dive on open circuit would be dramatically restrictive and would mean that we would have to carry over 12000 litres of gas on the dive. That’s a fair few cylinders to lugg around!

It is hard to explain to someone the wonderful feeling you get as you are descending. Looking down the shot line disappearing beneath you knowing that on the other end is a world class ocean liner waiting patiently for you!!

At about 80 meters the wreck came into view. The shot was sitting perfectly in position. Willy and Geoff had done a superb job in placing the descent line exactly where we wanted. It lay over the hull opposite where the front chimney stack used to be. There was not a breath of current and the viz – well Simon just looked at me with those eyes that said “This is Unbelievable!!!” The conditions were near perfect. On the surface things were a little different but down here the rain had stopped, the sun came out and there were two kids rearing to go and play!! One of the first things I noticed was the abundance of aquatic life. The same huge school of Kingees that kept an eye on us last time we were on the wreck last year were there to greet us. They spiralled round Simon and I only inches away just out of reach. Another fantastic experience. Huge schools of golden snapper abounded too as we waded through the bulk of fish life. We swam over the hull toward the bow till we found the infamous hole that was blasted open those many years ago when Johnson and Williams made history in recovering the gold! Armed only with a viewing chamber, a radio and a grab lowered from the surface he successfully recovered  just under 8 tonnes of gold! There is always the thought of “What if we come across one of the five bars of Gold that was kindly left by the team??” 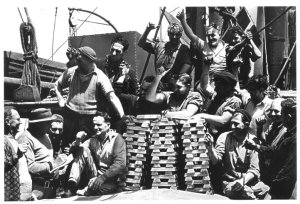 But alas the chances of finding a 25x9cm bar amongst 14 thousand tonnes of shipwreck was a little optimistic to say the least! Just being there, swimming round the wreck was Simon’s and my “bar of gold”. The hole was huge. All the walls had fallen in now and there were no recognisable features that there were ever any rooms, around the area. Huge steel plates, metal girders and debris hampered penetration opportunities so we headed round in between the two stacks. Before the dive we both looked at the ships plans and some photos that I had acquired from the museum. They were copies of pictures of the internals of the magnificent ship. They were not wrong when RMS Niagara was labelled “Titanic of the Pacific”. So luxurious and stately.

A huge oval stain glass skylight drew our attention that started in the first class smoking room. This magnificent structure assisted in the natural lighting of the 1st class accommodation block vestibule and the 1st class Dining room. We looked at this structure and tried to imagine it’s beauty an elegance in it’s day. What a great objective to see whether it was still intact so we investigated! 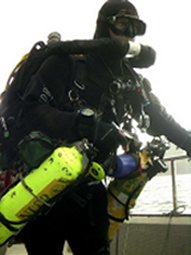 Wow! Not only had the promenade deck (B deck) disintegrated but also the Shelter deck ( C deck). This is where the 1st class accommodation was. Simon and I swam into the 1st class Dining room through the oval hole that was now the top deck. I could recognise the sculptured columns and the moulded ceiling patterns. The table tops had long since disintegrated leaving only the main table legs bolted to the floors. A ceiling fan hung by a cord. The once beautifully polished floor boards which were modestly covered with well made rugs now lay at a 90 degree angle with a thin layer of silt covering it. All the hand made chairs, table fittings, cutlery and crockery predictably lay in a huge pile of rubble on the ocean floor covered with nearly 60 years of silt and broken down wreckage.

We exited the wreck and made our way back over the hull and toward the shot line. I still couldn’t believe the amazing conditions. As we ascended up the shot line I looked down and had the most fantastic view of the wreck. At our 80m stop I could see how far the two decks had collapsed. Almost three quarters back towards the stern. Incredible!

At our scheduled 50 meter stop I popped my deco marker buoy and our drifting shot with bailout gas was deployed by our surface support.

We arrived at the 9 meter decompression mark and after about 2 minutes into the stop I suddenly started to spin uncontrollably – or at least it bloody well felt like it. I immediately thought it was my rebreather and switched to bailout. No change, still spinning! I switched back to CCR. Signalling to Simon that something was amiss. I tried to control the increasing nausea but after about 10 minutes I had to switch to my bailout and was sick. This happened frequently throughout our two and a half-hour deco. Fun and games!

The most essential component of any expedition of this type is the support team. Without skilled people acting immediately to problems, fatalities can occur. There is no room for error. Willy, Geoff and Rex were amazing in their support efforts thanks guys. Back on the main boat we tried to piece together what happened to me. Having one of the worlds leading hyperbaric physicians on the dive had its advantages! Simon had my diagnosis figured out well before we surfaced!

I had suffered a case of inner ear decompression illness (DCI); pure inner ear DCI to be exact, meaning that the inner ear was the only organ affected. I had none of the other more common symptoms of DCI such as pain, tingling, or weakness.

Simon explains: “Pure inner ear DCI is a rare condition that is almost unheard of in air diving. It is well recognised in mixed gas diving, particularly when gas switches are made from mixes containing helium to mixes containing nitrogen and no helium (such as air or nitrox) during the ascent. Both Peter and I changed the diluent gas in our rebreathers from helium-rich trimix to air at the 30meter mark during the ascent. This practice can shorten the decompression from a deep dive quite substantially.

No one knows for sure why the helium to nitrogen gas switch precipitates inner ear DCI, but there are two prevalent theories. The first focuses on the possibility that tiny helium bubbles form in the fluids of the inner ear during the ascent. The theory holds that these bubbles are not big enough to cause any problems on their own, but that when the change to a nitrogen-rich mix takes place the higher numbers of nitrogen molecules that suddenly appear on the scene diffuse into the bubble faster than the helium molecules can diffuse out. The net effect is that the bubbles grow. The second theory focuses on the possibility that there are no initial bubbles, but that the helium molecules diffusing out of the tissue and the nitrogen molecules diffusing in have to “pass each other” on their journey (for want of a better way of putting it). This could cause a transient local gas supersaturation in the area, particularly if the passage of the molecules in each direction is held up somewhat by a natural diffusion barrier (for which there are several membrane candidates in the inner ear).  The reason for the inner ears particular susceptibility to such events is thought to relate to its fundamentally watery nature and poor blood supply. In this setting, gas diffusion takes place over relatively long distances and unpredictable consequences of the relative diffusion properties of the gases involved can come into play.

Pure inner ear DCI in mixed gas diving appears to be a fundamentally random event, and the frightening thing is that almost all cases occur in divers who have completed (or are completing) uncomplicated dives in which there is no breach of ascent rates or table / computer decompression prescriptions. In Pete’s case he was lucky because it was only his balance organ of his ear that was affected. In some cases the hearing mechanism can also be affected. Pete was treated by Drs Alison Drewry and Des Gorman at the Auckland Navy Hospital, and made a complete recovery.”

This experience demonstrates that you can plan an expedition, be methodical in your planning, factoring in foreseeable contingencies, have back up plans and emergency procedures in place, execute the dive with precision and still have problems. This is the nature of this extreme sport. 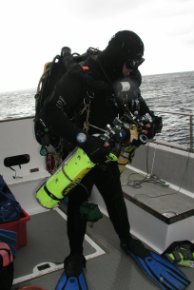 I have to say that the deco was a challenge, probably the longest two plus hours I have ever spent underwater!

Hence, a dive of two halves. The first halve was the biggest blast a technical diver could ever wish to experience. The second was a blast of a less pleasant sort, but one that we’ll just have to chalk up as, experience. Next expedition we will be doing more exploration and uncover more data on the ships state.