The State of the Oceans and You

The world is warming up, the corals are bleaching and dying, fish stocks are being depleted soon beyond repair, and what on earth can WE do? We still need to get up in the morning to go to work, deal with the mortgage, pay attention to the kids and to a myriad of things that truly seem more pressing on our daily lives. And yet, if you’re reading this chances are you do care about the ocean and the consequences of the seemingly unstoppable harm being done to it.

So what to do? Avoid the news? Buy more headache pills? Eat more chocolate?

I’m writing this to tell you about a few friends who got together to give a hand to the ocean and to a coastal community that makes a living from the ocean. Sure, those friends were lucky to come across such opportunity, but knowing such opportunities might be out there could help others find ways to feel useful in a manner that co-exists with the pressures of their every day lives. 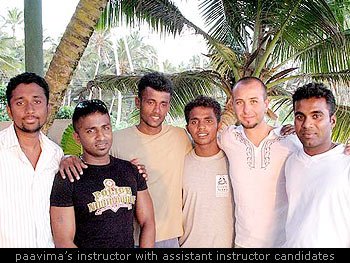 This is the story of a project called paavima.org, and it is taking place right as you’re reading this in southern Sri Lanka, in a village called Madiha, affected to a big extent not only by the tsunami of December 2004, but also by dire social and economic circumstances, which in turn keep feeding this loop of harmful behavior towards the ocean and the environment.

The project started in the fall of 2005, when after the tsunami a call for help was put out for dive instructors to give a hand. The call echoed nice and loud and was answered by this group of friends who eventually made their way to Sri Lanka from various corners of the world. I was very fortunate to be one of them.

The community we were asked to come and help is not one living in abject poverty, coastal communities rarely are. It’s not one truly decimated by the tsunami, as there were many, although it was seriously hurt by it. However, it is a community in need of support to ensure the precarious way it earns a living does not continue to hurt it or the ocean habitats it depends on to live.

A large number of people in the southern most coast of the island make a living by collecting ornamental fish, the fish that are bought all over the world for aquariums. In fact, Sri Lanka became the first country to export aquarium fish in the 1930’s, so there is a tradition that goes back generations. Unfortunately, as we found out as soon as we met the community, the local divers collect fish by diving without any prior training, poorly equipped, diving too long, too often and without much awareness to their health or that of the environment. It is alarmingly common to find cases of cutaneous decompression illness, or skin bends, and even fatal accidents are not rare.

The call this group of friends answered was to provide the community with dive training on a volunteer basis. There was some money gathered, and we all figured a way to get to Sri Lanka on a combination of donated miles and our own resources. Once there, we got right on it. We started organizing the theory part of the dive training in the afternoons, after the guys had had a chance to work in the morning, since they were still in need of feeding their families. Then we started with the practical water exercises. The classes went great but slow since we had to have a translator explain every word we said! A course that usually takes four to five days took us a good month to finish, but we just couldn’t stop there. More than a couple dozen guys became PADI Open water certified. Most of those Padi advanced divers, and several went on to do the Emergency First Response course and later the Padi Rescue diver course. A couple of them, even became Padi Divemasters and went on to become Padi Assistant Instructors. In a place where opportunities are hard to come by, this means quite a lot. 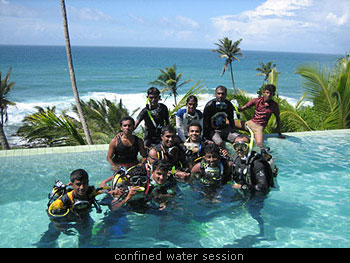 As part of what we decided to call the ‘paavima.org‘ program, paavima means buoyancy in Sinhala, one of the main languages spoken in Sri Lanka and the predominant one in the south of the island, we decided to build a small dive and education center. This was meant to serve as a place from which to hold the classes but also as a tangible symbol of the training achievements of the Madiha divers. Affectionately, and somewhat descriptively, we call it "the shack", or the "paavima shack". A very simple wooden structure, it is actually what one could imagine a dive shack in tropical nirvana to be like. Right on the beach, on property kindly offered by the generous souls who actually sent an email out to the world seeking dive instructors to come help the community, and surrounded by palm trees and the soothing lullaby of the breaking waves.

The intent behind "the shack" is to create the means for the community to further their professional diving abilities and develop skills that would better allow them the opportunity to work on the diving industry. "The shack", in fact, serves as a humble diving center for tourists to come dive out of. Madiha is quite small. There’s only a couple dozen houses, a couple of guest houses, a dirt road but lots of charm. The courses offered through "the shack" both to the local community and to visiting tourists are, for now, all given by volunteer and experienced dive instructors. Besides the dive teaching, "the shack" is also a community meeting place where we’ve organized English classes and beach clean-up events, as paavima.org is adamant to convey not only the importance of safety but also a responsibility to the environment as part of all the training. The season in Sri Lanka, due to the monsoon, lasts roughly from November until March, so the drive to staff "the shack" with dive instructors or English teachers who are willing to lend a hand is seasonal. Hey, got any plans to be in the neighborhood next season? More on that in a bit.

Ideally, of course, we’d like to see the paavima.org project become self-sustainable. To that end, we’re committed to offer courses on a volunteer basis up to a dive professional level to those who want it among the community. If we could nurture even a couple of local divers to become dive instructors they in turn could help a larger number of divers in the community learn to dive in a safe manner. The demand is great, but unfortunately, we have not been able to train everyone who has asked for training, since we’ve been a small team on site for most of the time.

Besides the training and "the shack", a couple of us in the team came up with the idea of building an underwater memorial that would pay respect to the lost souls of the tsunami. We envisioned this memorial to become an artificial reef as well, nurturing life where there is now none. The gesture of giving a flower carries with it very positive connotations in all cultures, so we decided to build a giant lotus flower under the sea. When built to the proposed 60mts in diameter, this giant underwater lotus and artificial reef made out of trademarked reefballs will be able to support a fish biomass of hundreds of tons a year in an area that now is barren! If you’re a diver and have never heard of reefballs definitely check them out at reefball.org. 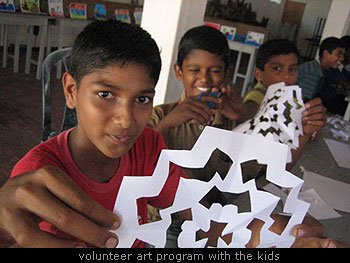 There are a few conflicting opinions about the harm done to the oceans in the process of collecting ornamental fish. All of us at paavima.org have indeed struggled with this issue. However, we’ve also come to believe that you cannot tell a community to stop doing something they’ve relied on for generations as a source of livelihood without offering a viable alternative. Thus, we’re hoping that by nurturing the community’s interest in the environment, by creating a gorgeous artificial reef that will help regenerate fish stocks and create a unique dive site that would in turn stimulate tourism to the area and by helping the divers in the community gain the awareness to keep themselves safer, the paavima.org project is taking steps in the right direction.

So, got any plans to spend some time in Sri Lanka next fall? Why not consider volunteering a couple of days during your next vacation? Whether you take a diving course at "the shack", come teach a dive course, an English class one afternoon, or even take a Sri Lankan cooking class right at the beach, the community of Madiha will be touched. We’re pretty sure you’ll be too, just as we have been. If you’re interested, or want to know more shoot us an email at [email protected].

However, even if you don’t make it to Sri Lanka or are able to lend a hand to projects like paavima.org, you could at least consider learning more about the topic. Just that is indeed a very positive contribution to the ocean’s cause. 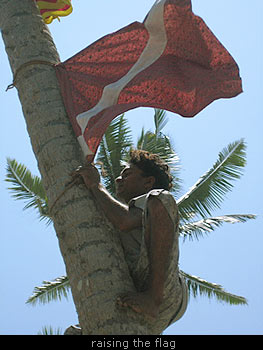 A friend of mine, a biologist, answered the question "why really, should anyone care about the oceans?" in quite a succinct manner. Oceans, he said, equal life. Not fish life, not marine life, but life on Earth. There are many reasons why one might not be able to volunteer their time and effort in a place like Madiha, but one could contribute with much less commitment by learning about the topic and talking about it. If you haven’t yet seen it, ‘An inconvenient truth’ is an important film to watch.

It’s good to be ocean minded. And it’s even better to be open about it.

We have the scuba diver in your life covered this Christmas. Check out our Scuba gift list for this year.
Read more
Scuba Diving

We have the scuba diver in your life covered this Christmas. Check out our Scuba gift list for this year.
Read more