Vertical Blue 2008 – It's Happening Beneath the Surface – Part 1

We watch for the results online, the results tables color coded in read, yellow and green. WR, NR, DQ, and DNS. We are hungry for bigger and better numbers.

But it’s all happening beneath the surface: inside neoprene clad heads, within collapsed chests and hearts squashed down to the size of a thin pancake, and beyond the sight of the sonar and the safety divers waiting down the line.

Take Ryuzo Shinomya’s national record dive, yesterday. I met him at 20 metres on his way up and he was smiling. Smiling! I guess you would be too if after two years you had finally achieved a dive to 100 metres in competition, setting a national record in the process and reaching the surface with a strong presence. 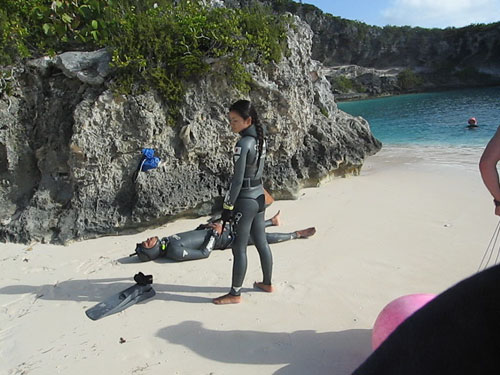 After moving to the warmer waters of Okinawa in 2005, Ryuzo dove to 98 metres in training a year later, but couldn’t find that groove in a competition – until now. We spoke later last night. He is enjoying the multi-day format of the Vertical Blue competition because it helps him and other divers be more patient with their peak performances. Ryuzo seems to be really enjoying this competition and his focus has been as good as it has ever been.

The counter-balance safety system, in his opinion, makes the competitors more responsible with their announced performances. It’s a trade off – having no scuba divers present makes the competition a thousand times easier for the organizer, and much more affordable for the competitors. Hence the multi-day format reduces the pressure to put everything into one dive. For example, today, Kerian from New Zealand turned early after experiencing strong narcosis for the first time and Christian Maldame abandoned his dive after almost having a packing blackout. Ryuzo clearly is also thriving in this environment.

Now, take Dave Mullins. You look at his numbers. The 244 metres in dynamic world record and his huge constant weight dives imply either a full-on mutant (of course, if you’re reading this, Dave, I mean that in the nicest way) or else a hard-core devotee to full time, high intensity training. Well, sitting in the common room at Ellen’s Inn last night, he looked like a regular guy and his approach to training is anything but sensational or type A. 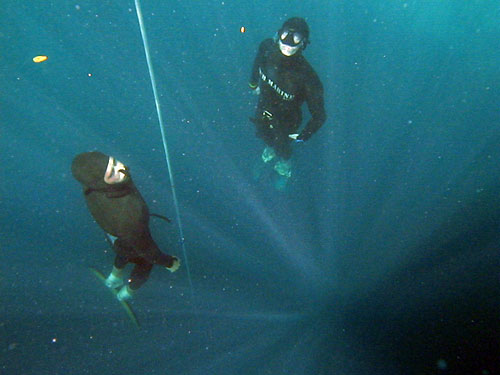 Beyond having guys at the local pool congratulate him on his world record, he jokes that having any more fame than that “might be a pain.” Of all the competitors at Vertical Blue, Dave is the most low-key freediver among them. His conversations are laced with understatements. See if you can find any below.

After “getting equalizing right” in Egypt last year, and upping his monofin technique for the occasion of the dynamic world record, Dave is now “happy to go deeper.”

I learned that Dave Mullins does 150-200m dynamic several times in a practice session. For him that isn’t pushing things. He used to think so, but not anymore. He said that it feels about 75-80% of his maximum effort.

“I don’t really get hypoxic in training,” he says. “Maybe I should, but that would be tough, I think.” And he flashes a rueful smile.

Dave doesn’t cross-train at all, and if you consider his extensive spearfishing background as such, he dismisses that by saying, “spearfishing takes away from my training time, really.” And as another incredible weekend warrior athlete, his training time is limited, especially for constant weight.

What excites him about diving the most at the moment is learning more and more about going deeper. Despite his amazing progress to world record holder caliber dives, Dave has only had a flirtation with a blackout twice: once on his dynamic attempts and once during a static apnea in competition. Never in constant weight.

Right now, he is most engaged with solving the challenges of narcosis and equalizing (that one seems to be solved, at least) and his streamline during the descent. The more distracted he becomes, and perhaps narcosis has a role there, the less attentive he is about keeping a hydrodynamic position on the descent, and that slows him down, making the narcosis worse. This was the case today, but with a twist.

After yesterday’s easy 108 metre dive (but with a dash of narcosis), Dave now has a new experience to process, if he is able to remember it well enough. As they watched the fish finder sonar from the surface (which is only a backup tool for the safety system), the surface crew saw that he seemed to pause near 70m and then continue downward, more slowly, spending a great deal of time beneath 80 metres. After three minutes had passed and I was waiting at 20 metres for him to appear, it was clear that Dave was overdue. The visibility had worsened suddenly as the tide began to turn. Faintly, I heard the sound of Dave’s monofin thumping against the water column and his lanyard karabiner fizzing against the descent line. He emerged from the gloom, still kicking, still with his arms over his head. Even though he was more than forty-five seconds behind schedule he, still had very good form and it was impossible for me to tell his state of awareness. Any other diver would show serious signs of a struggle, and perhaps already be blacking out once in sight of the safety diver.

We surfaced and while I was focused on making sure that he didn’t slip beneath the surface after making it back, the judges saw that Dave was unresponsive even though he instinctively grabbed the rope after his hands hit the top of the counterbalance arm and then he held onto it tightly. He barely shook but his narcosis and a conscious blackout- for lack of a better term- delayed his surface protocol beyond the twenty-second minimum.

Later, he could only remember seeing me briefly. But as he told it to other divers and the judges, he had decided to turn early at 70 metres, but instead of sinking in a streamline, he sank, presumably very narked, in a tag-capture pose all the way down until the hitting the bottom plate reminded him of his purpose. What is odd is how he was so narked at 70 metres, a depth he has cruised past many times before with ease. Perhaps he was weakened in some way from the 108 metre dive the previous day that took longer than he had wanted it to take?

Dave had already talked to many of us about narcosis being a new and significant variable for him and his desire to shorten the dive time considerably, more in line with his easier training dives.

The unique challenge that freediving offers competitors underwater is whether to trust their intuition or the plan, which is based, in the ideal case, on a history of dives in varying conditions and states of mind. Freedivers pushing their limits use their thoughts, sensations and feelings to decide whether to continue with a dive. But anxiety, hypoxia and narcosis distort this already tricky reasoning process.

When a dive does not go as planned, such as in Dave’s case today, I imagine that the diver looks for answers from both the conscious and subconscious mind, from intuition and analysis. But so often, not all of the data is readily available. 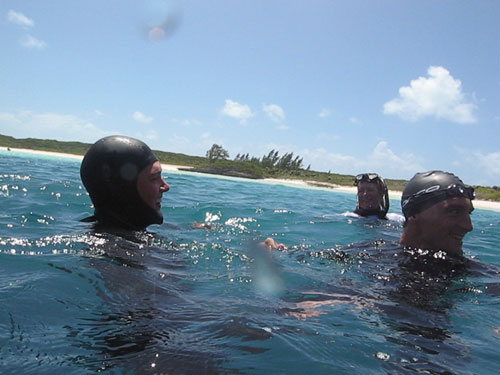 At dinner the night before Dave Mullins’ bizarre dive to 111m, several freedivers were talking about how to come to terms with a blackout or a frightening dive. Ryuzo had the wisest and most sage advice. He reminded everyone that freediving is “just a game.” It’s a complicated, exhilarating, sublime and addictive game, to be sure, but he’s right, as with any athletic endeavour, it is not worth feeling guilt for missing a dive. Ryuzo went even further to say, “If you black out, you have to forgive yourself.”

To be clear, he is talking to trained and elite freedivers who have spent a long time learning their own diving idiosyncrasies. But, in a way, this applies to everyone. You learn what you did that might have contributed to the missed dive, and then you move past it. While this doesn’t absolve you of the responsibility to learn from what went wrong, it is just a game and you are trying to enjoy it, have fun and experience the distinctive flow of the underwater athletic moment.

While Ryuzo was imparting his wisdom and sharing his compassion and understanding of the deep inner contradictions that many freedivers will face if they dive deeper and deeper, Dave Mullins was sitting in a chair not far away from dinner table, staring off into space.

I think that given the supportive environment at Dean’s Blue Hole, all of us, including Ryuzo, who would love to have a world record in constant weight during this competition, hope that Dave Mullins will rebound from this experience, find a way to make going deep enjoyable and safe, and claim a depth that he surely can do on the right day with his usual smile and a self-effacing shrug and quick, “I am okay.”