For a wrap up of today’s official results and tomorrow’sschedule, please visit http://www.verticalblue.net/news/

Update for April 6th: William Winram turned early again on his last attempt before leaving the Blue Hole. He said he feels like he has the training and preparation to make the dive, but he is experiencing unnerving contractions, possibly pressure contractions on the descent, which mess up his equalizations. He attributes this phenomenon to the fact that he no longer lives in Hawaiin where he can dive all the time. Now living in Switzerland, his year round water time is greatly reduced. 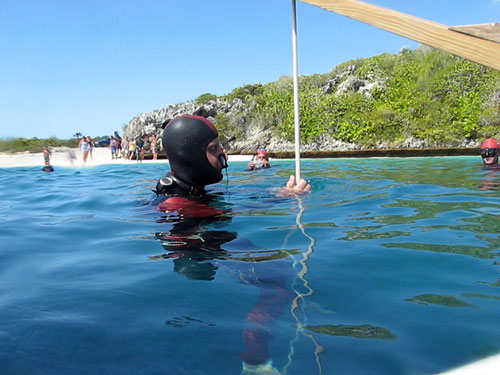 Karol Meyer conquered some demons with a moving dive to 53m in CWT. Kerian Hibbs coached her to breathe during her recovery and she held on to make the dive successful. She had become very discouraged over the past few days, but as the visibility had improved to the point where the whole edge of the Blue Hole was visible from the platform, and some reassurances from her fellow competitors, Karol made a comeback.

Now we return to our regularly scheduled programming….

Kathryn McPhee: The Next Mandy-Rae Cruickshank? 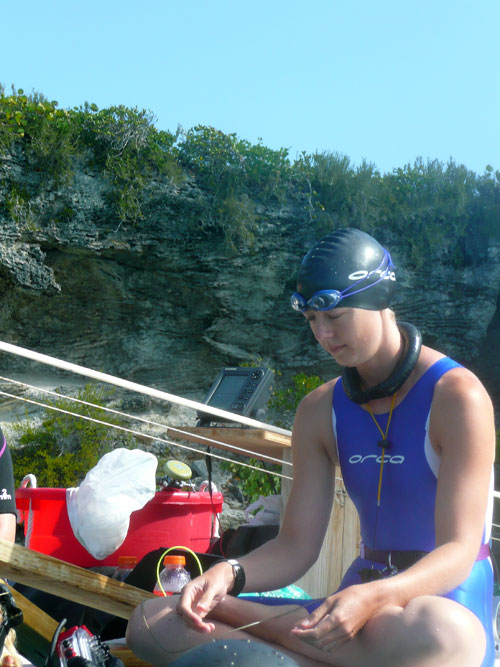 Kathryn McPhee has been diving competitively for threeyears and suddenly she finds herself fast approaching world record depths inconstant without fins. I spoke to her this afternoon, following her nationalrecords of 41 and 44 metres over the last two days and today’s surface blackouton her 50 metre attempt.

“I told my friends that I would either becomeobsessed by freediving or decided not to do it at all,” she says as webegin the interview. With a laugh, she indicates that a freediving obsessionwon the day. She skipped her intro course and went right into training. NowKathryn is sponsored by Orca and aiming to mature into a world record threatfaster than she expected.

Kathryn swam competitively up until her mid-teens butdidn’t do anything seriously athletic after that, she says. However, she hastaken up competitive freediving with a single purpose that reminds me ofMandy-Rae Cruickshank in her early years.

Like Mandy-Rae, Kathryn talks about wanting to achieveone goal after another – a world record in CNF and a strong Kiwi team at theworld championships – and seems irritated by missed dives. She admits herdesire to achieve better results has lead to overtraining in the past. But shesays she is learning to back off quite a bit.

At the 2007 Indoor World Championships in Maribor,Slovenia, Kathryn had a horrible competition. Kathryn says she was severely jetlagged but given her exhaustion from training too hard, she didn’t reallynotice and suffered blackouts in the pool.

“Now I train with max attempts and then follow thatwith technique. I don’t do as much as I used to do.”

Kathryn hails from Wellington, New Zealand, where sheworks as an architect. Although her home town is surrounded by water, thedeepest she can find for training is twenty metres. To dive deeper requires afive-hour drive to Lake Taupo, which has up to 90 metres of depth, but sharpthermoclines that she does not enjoy.

In the Blue Hole, she has shed her wetsuit and dives downstraight as an arrow. As she says on her blog, she is now finding the descentmuch easier than the ascent. There are no thermoclines here, the sun is warm,and there is no bottom.

It took Mandy-Rae Cruickshank several years to turn heriron determination into world record-breaking results. Kathryn McPhee seemspoised with a similar potential given the relish she has for achieving betterresults.

Megumi and Leo: Under the Sea 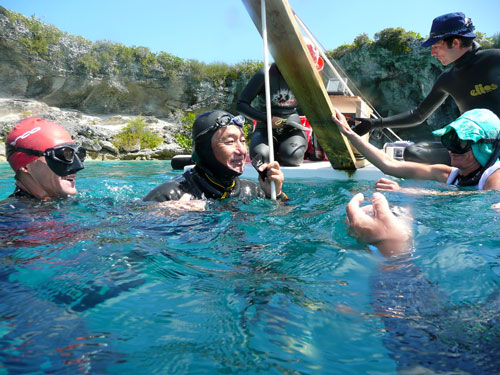 Today, Leo Muraoka came within six metres of setting anew national US record in Free Immersion. Tomorrow, he attempts 72 metres,narrowing the gap. Megumi Matsumoto, set a national Japanese record in freeimmersion yesterday, gliding up the rope so slowly that I began to wonder if Iwould need to abort and surface ahead of her.

Both Megumi and Leo dive with a poise that you rarely seeamong young divers. In their own words, they want to enjoy the process as muchas possible. When I spoke to them at dinner this evening, I learned that theocean has been a lifelong love affair and one that brought them together.

In 1980, at the age of twenty-three, Megumi brought herdaughter to see an underwater performance at Japan’s version of Sea World. Shewas so entranced by the underwater swimming, the actors playing mermaids, theopen sea shell and kelp forest and watching everyone swim around like theybelonged that she saw the manager backstage after the show and got herself ajob as an underwater dancer and performer. She did this for ten years and herdaughter later joined the show, as well.

Leo, meanwhile, had moved from Japan to Maui in 1981 andtook up spear fishing. In 1991, Jacques Mayol spoke at a conference aboutdolphins in Hawaii. Leo went to the reception and met Mayol, and moreimportantly, he met Megumi.

Now, Leo is a US citizen and lives in Kona, where hetrains with Andy Norlander, Bill Graham, and Annabel Briseno. He runs a tour guiding operation withtrips to Mauna Loa and Mauna Kea,introducing visitors to the volcanic features, the eight climate zones on themountain, and the stars at night. Leo also showed me a beautiful hand-made monofin that he made fromscratch, telling me that the design took him over ten years to refine. It is a thing of beauty made with morethan just a desire for the ultimate fin. It is a piece of art.

Megumi started teaching freediving at her scuba shop in Japan.In 1999, a young college student by the name of Ryuzo came to visit Megumi andasked to be taught how to freedive. Now Megumi teaches about one hundredfreediving students each year. And she and Leo has recently become Watsu (watermassage) practitioners, combining underwater and body awareness disciplinesinto one program. 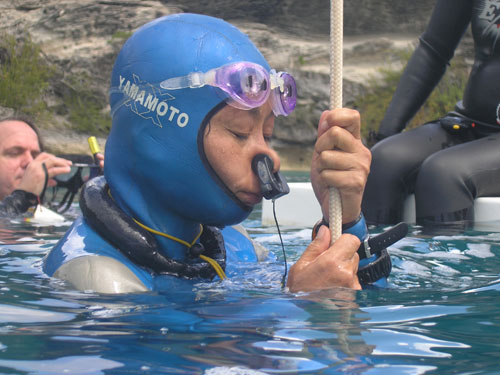 It seems that it is no accident that Ryuzo shares thesame poise and mental control that was so evident in Megumi and Leo. WilliamTrubridge told me he was impressed by how prepared and collected all theJapanese divers have been at Vertical Blue.

Tomorrow, both Megumi and Leo look to extend theirdepths, “to better ourselves,” in their own quietly confident way.

Update: Both Leo and Megumi made their dives (unofficially). Leo hung on to a tricky recovery at the surface and had white cards for his 72 metre free immersion dive. Megumi tried a faster style and made her CWT dive to 54m blazingly fast.

Eric Fattah: The Man Who Wants To Sink The Whole Way Down

Yesterday, it was 58 metres; today, 62 metres. Not onlyis Eric is starting to amaze the other freedivers at the Blue Hole, he is alsofinally proving that his theories have been sound all along.

“I’m finally accepting that I can sink for so longand still make it back up.”

Today, William Trubridge was the primary safety diver forEric. William looked impressed when Eric finished his surface protocol after adeep hook breath and then swam back to shore as if he had done an easyrecreational dive.

A lot of the things Eric has done in the last few yearshas become second nature to him, although they still tend to surprise those whohear of them: FRC diving, no suit diving in cold water, apnea mountain hiking,his exacting equalizing and mouth fill methods (and standards)- but I can tellhe is very happy finally to bring them all together with these dives. Eric is someone who gets excited mostby discovering new paradigms in training and diving. He’ll try anything tentimes to be sure and to extremes that would frighten most people away. 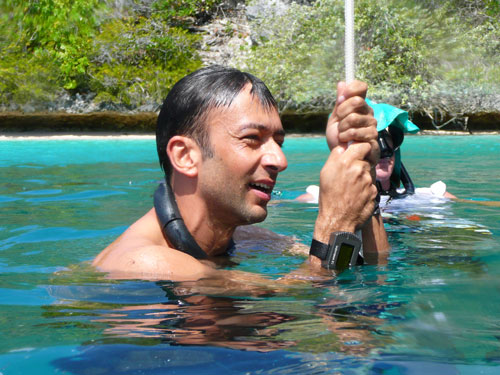 Just during his few days in the Bahamas, Eric has ridhimself of most of his gear. He makes his dives with only my new Chen Binmonofin, a snorkel, a foam noodle to support him on the surface. It looks very weird to see him withoutthe usual gear on. For sure the Blue Hole has given him an idea venue fortrying out the minimalist approach.

I asked him how today’s 62 metre dive compared to theprevious dive and he replied that it felt no different at all. The only thingwas that he was even more blood shifted so that he couldn’t kick as quickly onthe way up from the bottom.

There is also something a little incomprehensible aboutthese dives that most people won’t know. Eric has been working hard onLiquivision Products, Inc., the company he runs in Vancouver with his wife,Margaret Malewski. So hard that he and I have only been diving once or twice amonth this winter. He has been working harder than he ever has before and hasbeen sick for many weeks before arriving at the Blue Hole.

This is Eric Fattah at his baseline. And today he had afull mouth fill of air when he made his turn at the bottom.

Tomorrow, he takes a rest day, and then after that, wemay see him try 67 metres in constant weight FRC. That depth has specialmeaning for him.

“It changed my relationship with the ocean,” heremembers. “It was important in several ways. It was the deepest monofindive to my knowledge at the time. I asked Claude Chapuis just before the divewhat the deepest dive was. Both heand Pierre Frolla had done 65 metres that year with monofins, since severalFrench divers were using them. Going deeper than 60 metres was something thatyou did with special equipment, like scleral lenses, not with a stock mask andsnorkel, and never in competition. We also had poor conditions in Vancouver,compared to the clear Mediterranean Sea. Cold, dark and bad visibility. I worea 6 mm top and 3mm pants. I hadn’t trained for years and years like thosedivers had. It didn’t make any sense.”

Sitting on the rocks on the shoreline of his dive spot,Eric stared in the water and asked himself what it all meant. Only 14 metresaway from the world record at the time, he realized that with a few changes itcould be within reach.

Dean’s Blue Hole has seen the deepest FRC dive to hisknowledge and Eric is wondering what comes next.

Next article: In-depth interview with William Trubridgeabout his life aquatic; Natalia Avseenko – the Singing Mermaid; and FrankPernett, who knows what his residual volume is, do you know yours?