Weight Watchers, the worlds biggest diet company that offers various products and services to assist weight loss and maintenance, has been spotted by UK charity Bite Back suggesting to its members that endangered species of shark, swordfish, skate, monkfish and even orange roughy are good suggestions in a big to lose weight.

Despite a Facebook campaign to urge the company to make a simple editorial amend to their recommended foods, Weight Watchers have issued a statement saying it is not their responsibility to inform their members of the ethical nature of their eating habits, just the nutritional value.

Campaign director at Bite-Back, Graham Buckingham, said: “All the time these fish appear on a list of ‘Filling & Healthy’ foods, Weight Watchers is advocating their consumption among its two million members. We’ve offered to work with them to create a more ethical list but they’re not interested. Significantly their profits won’t drop if they make the simple editorial amend but their actions could help lower the consumption of threatened marine species in the UK. What’s stopping them? We’re now urging supporters and divers to voice their opinions on the Weight Watchers Facebook page and twitter to help encourage a re-think from the world’s biggest diet company.”

You can join in the campaign by going to the Weight Watchers Facebook page and posting your thoughts. 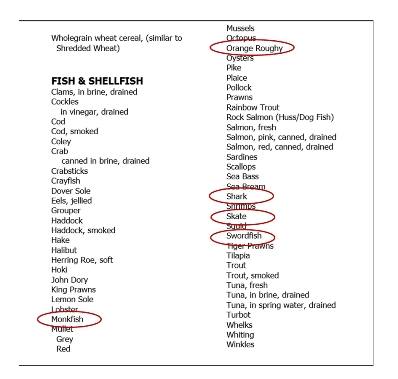 A new book detailing the best 50 dive sites in the UK by Will Appleyard is hitting the shelves on November 25th, 2020.
Read more
Scuba Diving

A large diving memorabilia auction is to be held on October 31st, 2020
Read more
Scuba Diving

A new study that looks at scuba diving rehabilitation charity Deptherapy's approach to supporting military veterans finds that diving has benefits beyond those found in other forms of sporting rehab exercise.
Read more