Mike Board is the First British Man to Reach 100 Meters 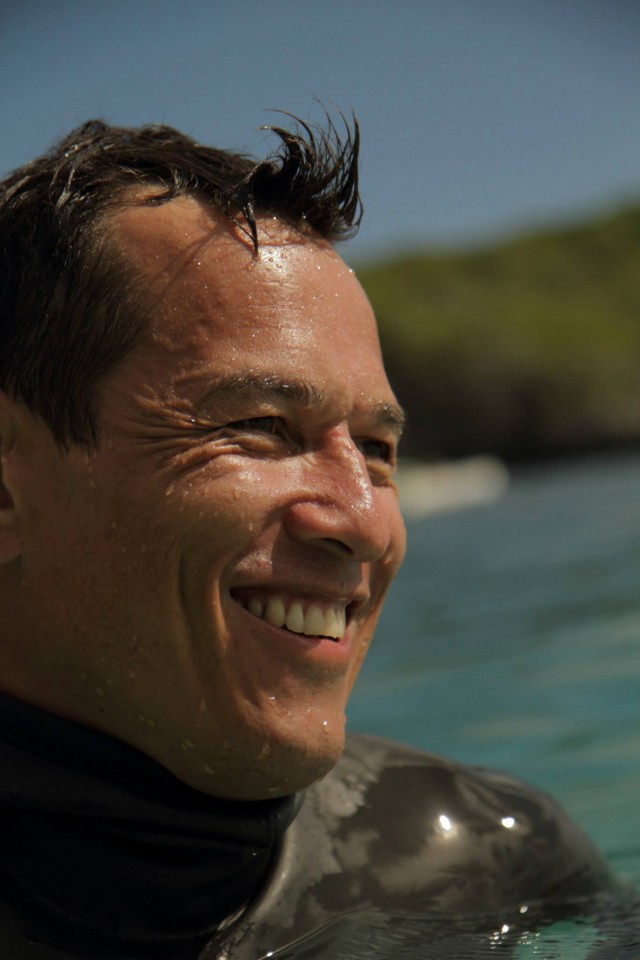 Not to overstate the obvious but the sport of freediving has its ups & downs. Literally speaking, as divers descend downward into blue, seeking the quiet of sink phase until they reach the bottom plate to then turn that peaceful repose into actionable resolve as they ascend, back to the surface — some are buoyed by technique & strength, others by sheer determination & hope. Of course the emotional ups & downs become a factor as well: managing one’s own expectations, the pre-dive jitters and sometimes the post-dive failures. But in these moments there is magical transcendence. Yesterday began the second act of Suunto Vertical Blue 2013 and the murky water that had persisted during the preceding three days, magically disappeared offering 100 feet of visibility instead and a chance for Mike Board to transcend. Board decided it was a good day to set a new national record for the United Kingdom and that 100 meters was his mark.

“I am so happy to get this dive and be the first Brit to 100m officially!” shared Board. “This 100 meters hasn’t been the easiest of goals to achieve as I’ve had some major and minor setbacks. Thanks to everyone who kept my spirits up along the way.”  Michael’s dive to 100 meters under constant ballast took him two minutes and :54 seconds to complete.

This makes Mike the deepest Briton to self-propel themselves down to 100m.  The overall official deepest British record was set at 101m by sled in the discipline of No-Limits (NLT) by Jim Lawless in 2010.

Some of the setbacks Mike mentioned included a heart-breaking narrow miss at last year’s Vertical Blue competition where he made the round-trip but didn’t have enough gas in his tank to perform a clean surface protocol (SEE video of that DQ’d performance here), and the untimely occurrence of a ruptured ear drum  in Greece this year, which sidelined the former Royal Marine Commando from competing in the World Championships just two months ago.

“I’m just so happy to be back diving deep again after rupturing my eardrum so badly just 9 weeks ago in Kalamata. Everyone was telling me I would have to miss Vertical Blue as it would not heal in time,” quipped Mike. “So I wasn’t able to even get much training in before arriving in the Bahamas!” Despite these myriad challenges Mike Board has made both his mark and history with an amazing constant weight (CWT) dive to 100 meters on the fourth day of the competition.