Amber Fillary of South Africa has broken the women’s Guinness World Record for the longest horizontal freedive under ice wearing only a swimsuit and a mask.

According to freediver Mandy Sumner, who was on the scene to witness the record-setting swim:

“Since last April, when she attempted the dive in Finland, Amber has been preparing to push the record this year. Her dive last Saturday was very strong and she gave the camera a thumbs up and a big smile as she surfaced at the 70-meter hole. She is already planning where she would like to stage another record attempt next year to push the record even further.” 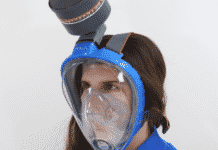