A Glittering Tail of How Impossible Dreams Get Mer-Made

DeeperBlue.com really wanted to get a video interview with professional Mermaid Linden Wolbert, but the arid Las Vegas desert has been drying up her gills, her scales, AND her vocal cords, so we had to be content with a print interview instead.

Linden is a savvy businesswoman with a degree from Boston’s Emerson University in film and science, and a ten-year veteran of “mermaiding.”  She spends her time writing, producing, and starring in her own educational webseries for kids, designing mermaid tails for other would-be sirens, and just generally finning around proving to the world that this mermaid, at least, is more rare than a narwhal.

Her fairy-tail began when she was a land-locked little girl in the Amish country of Pennsylvania.  Through a little porthole in her living room, she was able to watch stories of the wide world on PBS’s Nova and Wild America, plunging beneath the surface of the sea to ride along on the adventures of Jacques Cousteau.

It became her dream to do for other children what those programs had done for her — inspire them to learn about the amazing natural world.  Ten years ago at a freediving competition, the next piece fell into place when Linden had the opportunity to try out a monofin for the first time. Mightily impressed with the power and efficiency of the fluke, she set about adapting it as the base of her self-designed “customMer” mermaid tail.

Seven months of hand-carving individual scales and replacing the fiberglass blade of her classic Waterway Model-2 monofin with a more durable, and flexible, polycarbonate version resulted in a cascading aqua-and-gold confection that ends in an elegant crescent.

We asked her why she chose the crescent-shape specifically, rather than the more iconic whale-like Y.

“Dolphins and whales are overdone,” she said. “I based my fluke on the tails of the some of the fastest creatures in the sea — tuna, and sharks.”  The version she’s wearing for DEMA Show 2014 is a lighter foam replica of the more functional silicone tail she uses for swimming, a newer version of the tail that started it all with upgraded ergonomics.

Mermaid Linden‘s living the dream. Her popular webseries Mermaid Minute teaches kids about all things marine, and is so popular that the Kickstarter campaign she created to help her produce Season 2 was actually over-funded.

Being an Internet sea star doesn’t pay all the bills though, so Linden also does children’s birthday parties and other special events. What touches her heart the most though, are the Wishes — terminally-ill children who she has the chance to meet through the Make-A-Wish Foundation.

On the business side, Linden has recently parlayed the success of her “Mermaid Minute” and her acquaintance with Russ Lesser, president of Body Glove International, whom she has had the chance to work with on the board of Reef Check Worldwide.  Taking him aside one day to broach the idea of developing an accessible monofin for kids, Linden was shocked when she arrived at their meeting to find that Russ had much bigger ideas: A line of Mermaid Linden swim gear developed from her own expertise!

The flagship product is, of course, a sturdy, efficient monofin with a variety of thoughtful details that are guaranteed to blow competing products right out of the water.  It comes in two color combinations — a pink and purple version for your dreamy mermaids, and a teal and navy tail for those fishy tykes that want to blend in with their undersea surroundings.

Each fin has foot pockets made of soft silicone to protect little feet from blisters and abrasions, which is repeated at the tail tips to prevent any accidents that might happen with all the enthusiastic fin-flipping these things inspire.  They’re fully adjustable with removable foam inserts that will keep a mermaid-in-training swimming happily through multiple shoe sizes, by which time, just maybe Mermaid Linden will have come out with a design that even grownup mermaids can wear.

Until that time, however, she’s focusing on making the dreams of little swimmers come true and envisions her mermaid monofin being used at resorts and on cruiselines, or even closer to home in learn-to-swim classes.  With the Body Glove Mermaid Linden monofins ringing up with an MSRP of only $29.99, that feat should be nothing for this real-life mermaid.

New episodes of Mermaid Minute Season 2 are due out in 2015, but if you just can’t wait to learn more about Linden’s work or her product line, you can follow her on Instagram at #mermaidlinden, or go to www.BodyGlove.com/MermaidLinden. 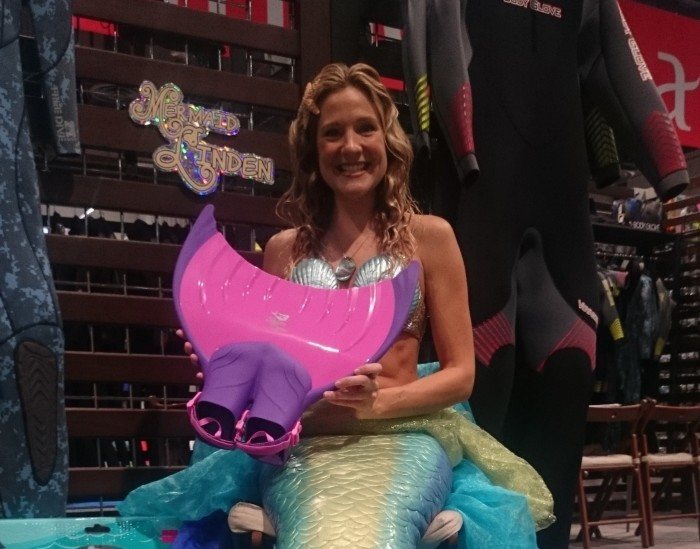