As you may have guessed this was an April Fool’s Joke for 2012.  Scroll to the bottom for more info.

Eco-Fashion brand Rapanui in partnership with the University of The Isle of Wight in the UK has taken an innovative approach to the issue of transparency and traceability within the fashion industry by developing a new fabric that can make t-shirts appear invisible.

The technology captures light on one side of a garment and relays it on to the opposite side.

“The research has been around for a long time but the principle is actually quite simple – to take light from the front of the garment and relay it to the back – and vice versa. Optic fibres are simply light conductive threads. They capture the light in the space immediately surrounding the garment and relay them through the threads. If you can direct this light directly out of the shirt, as we have done, the result is a vivid perception of invisibility.”

The hope is to develop variants of the fabric for a wide range of applications, however Textiles specialist Professor Barry Green said it would be “quite some time” before the technology could come to market, adding that an early idea would be to make landfill sites invisible: “Sustainability is an out-of-sight, out-of-mind problem. We can throw invisible t-shirts in open-air landfill sites – or even just on the street – and nobody will know they are there.”

Further applications of this technology could lead to military tools for Navy Scuba Diving and Rebreather Teams to aid in defense and research.  Marine Scientific and Conservation Research organizations have also registered interest in applications of the technology.

More information on this amazing breakthrough can be found at  www.rapanuiclothing.com/opticfibre

This was a joke by the fine fellows over at Rapanui.  We asked them to let us know a bit more about how they did it…

So how did you do it?

Well to borrow a phrase from our own “Professor” (local am-dram veteran Bill, from Bembridge) it was actually pretty simple, and the research has been around for a long time: we used green-screening. This is normally used to replace a whole background, like when the weatherman/woman stands in front of the map, they’re actually standing in front of a green wall and the map is superimposed there by a computer – the computer replaces everything bright green in the image with whatever you tell it to.

We did the same in reverse, and used a bright green t-shirt – then used green-screen software to replace the t-shirt with the image behind. Luckily our video collaborator Will Jackson is a bit of a CGI / green-screen specialist and Bill is epic at acting. And the lab? Well… you might be able to spot the WD40 and other miscellaneous parts from our Nan’s garage.

But how did we fake the “public reactions” bit? Well … that was magic.

So there you go. No Isle of Wight University based at Carisbrooke Castle, no invisible t-shirts (at least not from us) but at the very least… a bit of a laugh. 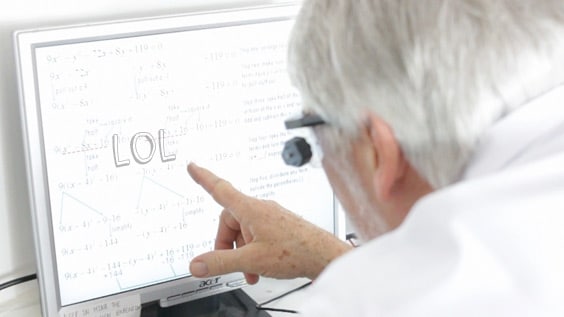