A jellyfish invasion has wiped out Northern Ireland’s only salmon farm, killing more than 100,000 fish.

Billions of small jellyfish, known as Mauve Stingers, flooded into the cages about a mile into the Irish Sea, off Glenarm Bay and Cushendun.

More than 10 square miles of area was covered by the jellyfish up to depths of 35 feet. Rescuers tried to reach the cages but the density of fish made it impossible. John Russell, Managing Director of Northern Salmon Co. Ltd., said that they are still assessing the extent of the damage. 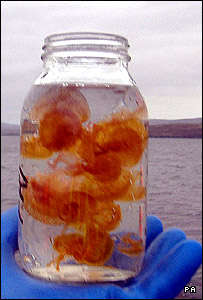 Image from the BBC.