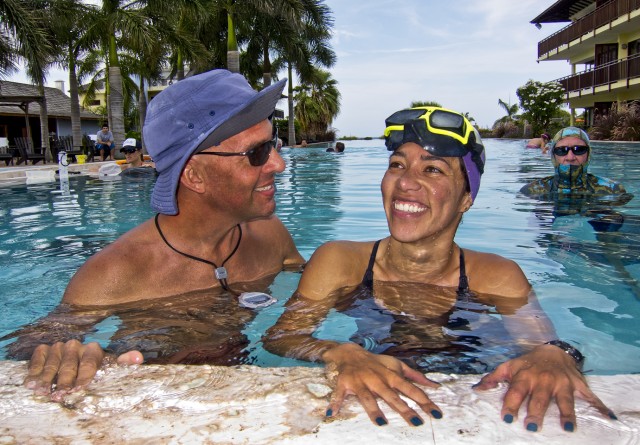 Karla Mendez has officially added her name to the AIDA record books for Venezuela. The former synchronized swimmer made quite a big splash this month at an annual freediving competition hosted by Performance Freediving International. Despite the fact that it was Karla’s inaugural appearance at DejaBlue, the 28 year-old managed to take top honors for the women overall while also setting two national records for Venezuela on the Dutch Caribbean island of Curaçao. On October 8th (in the spectacular pool at Lion’s Dive Resort) Karla set her first national record in the discipline of static apnea as she achieved  a breath-hold of five minutes and :41 seconds; (the previous Venezuelan record had stood the test of time since 2005.) Then two days later Mendez bested countrywoman  Iru Balic’s record in constant no-fins (CNF) by successfully surfacing from a 38m self-propelled plunge into the ocean.

“I felt great during my static” exclaimed Karla. “Since I felt so good in the moment I decided to just keep going! It was a nice surprise to come up with a new personal best. My PB before (of five minutes and :35 seconds) was set a while back in 2006 at the championships in Egypt. And as for no-fins I simply love it! It’s really my favorite. Next I want to train more depth for free immersion and constant weight so I can go deeper and deeper.”

Karla was not the only Venezuelan to fare well at DejaBlue, her teammate Antonio Del Duca also performed very well and took second place overall for the men. For a list of all the  athletes’ results check out PFI’s website.