Misuzu Hirai is the Fourth Deepest Woman in the World

There are no other women in Japan that can freedive under constant weight deeper than Misuzu Hirai. Which in fact secures her position as the fourth deepest woman in the world (in this discipline) period. Known simply as “Mimi” in the freediving community, she took center stage at Suunto Vertical Blue on Wednesday to prove she can play with the big boys. And play she has, as more often than not at this elite competition Mimi has usually been the only female diving during the second set each day with the likes of Guillaume Nery, Alexey Molchanov and William Trubridge himself.

On the seventh day of Suunto Vertical Blue Mimi set a new national record for Japan when she successfully ascended from a CWT dive to 90m in just 2 minutes and :52 seconds. “I am so happy to have made this depth — so very happy!” Hirai said, “I want to thank my friends, my family and my coach Kosuke Okamoto who have all been so supportive.”

There are only two days left in the competition, and Mimi may show us what appears to be more gas in her tank. Or she may simply enjoy a moment of satisfaction knowing that she has achieved something rare & spectacular. With this achievement under her belt, Mimi is in the top tier of female freediving along with Natalia Molchanova, Sara Campbell and Alena Zabloudilová.

For the first time, Suunto Vertical Blue is streaming LIVE via the internet so that people around the world can listen in to hear in real time how Mimi and every other athlete is performing. Enthusiasts are encouraged to also follow the action on Facebook and Twitter for up to the minute photos and videos of the event. 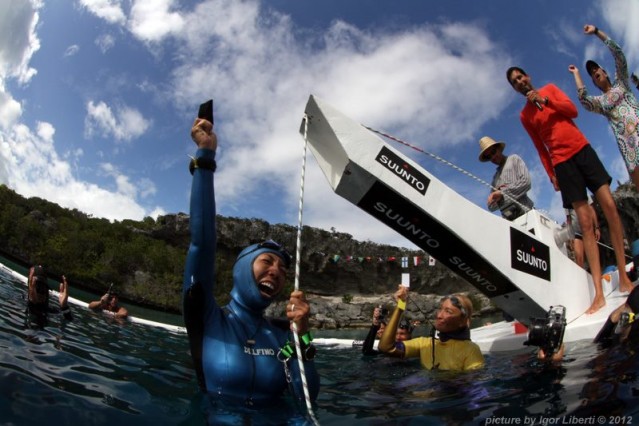