If there was any doubt before, there is none now: Natalia Molchanova is superhuman. The unparalleled athlete from Russia has outperformed everyone at the 2013 Suunto Individual Pool World Championships – including the men! On this final day of competition Natalia even beat Goran Colak (who took the male gold) and dominated everyone else under the sun as she astonishingly held her breath for nine minutes and :02 seconds in the static apnea (STA) finals. This crowning achievement for Molchanova marks the first time a women has successfully surpassed the nine minute mark in a competition, and gives the mother from Russia a nice hat-trick: three World Records in one showing. 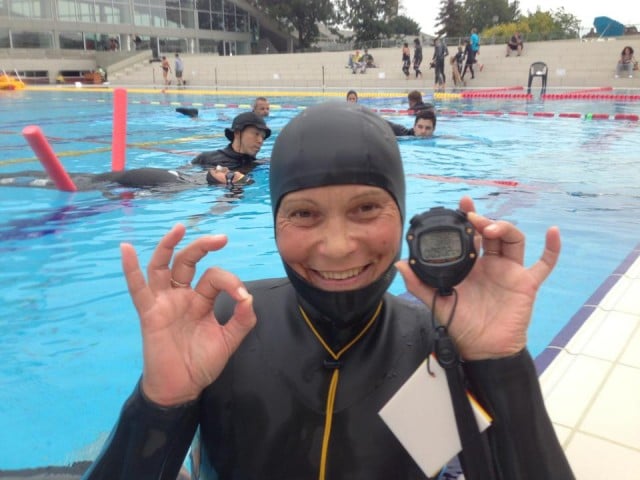 Since the start of the event in Belgrade Natalia Molchanova has delivered a Dynamic No-fins swim of 182 meters (beating Italian hopeful Ilaria Bonin by one meter) with a most unusual technique; then Molchanova swam 234 meters in Dynamic to push her own previous record further by 11 meters; and finally today’s amazing breath-hold crushed all others in her wake. These three World Records (pending doping tests by AIDA) make it clear that the 51 year old Russian is not only here to stay but clearly a force of nature. Check out one of “Natasha’s” world record-setting dives in the video (courtesy of Daan Verhoeven) below.

Also having a good day, Natalia’s son Alexey Molchanov who set a new men’s national record for Russia in STA with eight minutes and :33 seconds, and George Panagiotakis of Greece set his own national record in addition to taking silver for the men overall in static. Check out all of the static results here and just in case you’ve missed them here are the DYN results as well as DNF. The international competition concludes with an amazing seven performances over previous world records, which generated four new world records offered by 140 athletes from 24 different nations. By all accounts AIDA Serbia did a terrific job hosting AIDA’s largest pool world championship to date. Congratulations to all of the participants, judges and the organizers for a wonderful event.