The 3rd Med World Cup is now over, many new records were established and myriad personal bests achieved. Freediving athletes from far and wide all agreed that this competition put on by Freediving-Club Greece was not only successful but fun.

Accumulating the most points by the end of the competition were Jana Strain from Canada for the women, and Guillaume Néry from France for the men – both respectively are the winners of the 3rd Mediterranean World Cup 2010. (Guillaume’s dive to 114m under constant weight in Kalamata is just shy of his current national record of 115m CWT which he achieved at Vertical Blue 2010.)

Taking silver in the overall comp were Kerian Hibbs and Maria-Teresa Solomons. Rounding out with the bronze were Jure Daic and Liv Philip.

Additionally, there were many impressive performances coming from the likes of William Winram, Niki Roderick and Dave Tranfield, each of whom successfully set their own new national records.

The results for each of the disciplines competed in at this world-class freediving event were as follows:

Niki Roderick delivered a killer performance in constant no fins and inches herself ever closer, just two meters away from the world record currently held by Natalia Molchanova. 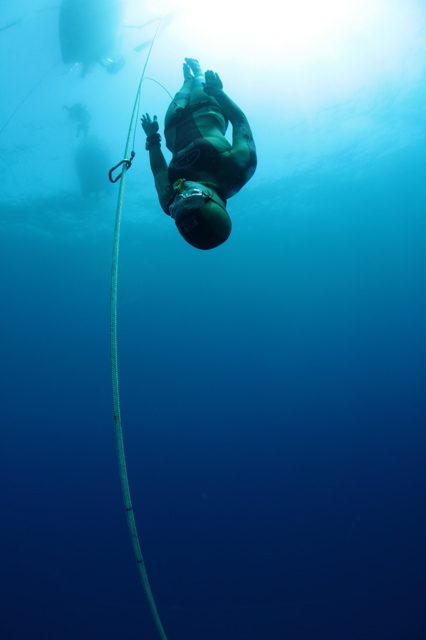 Photo of Niki Roderick in perfect CNF form, on her descent to 60m – a New Zealand and Continental Record.

First It was Star Wars, then came Batman, and now freediving could join the latest Lego set.
Read more
Freediving