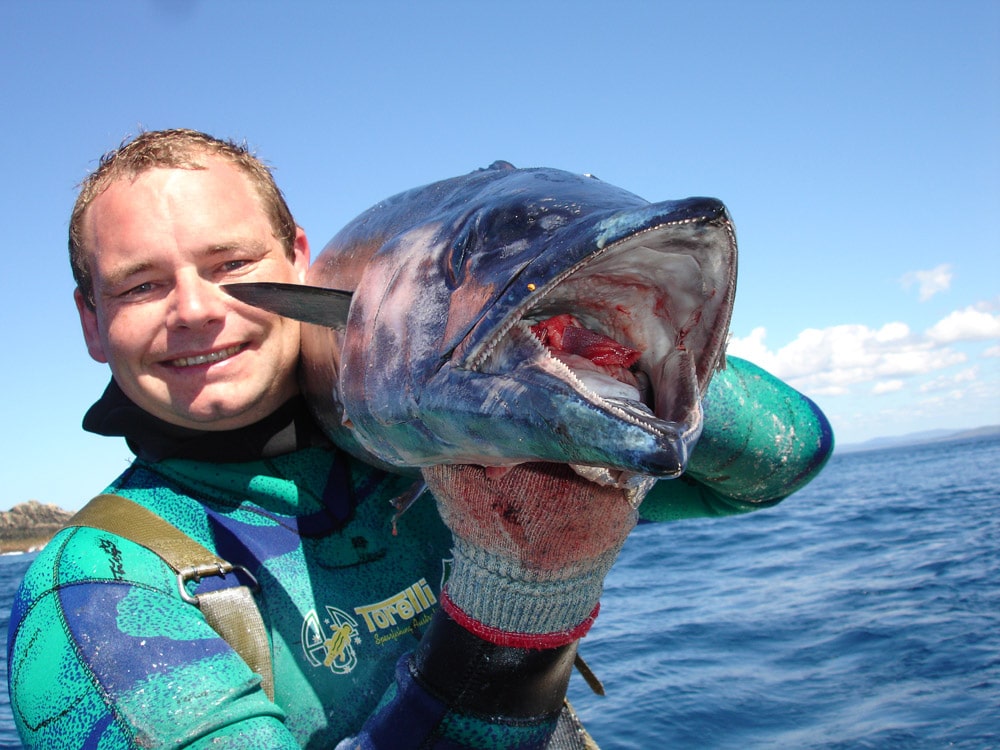 Setting a terrific collaborative model for the rest of the world, Australian spearfishing clubs from New South Wales and Victoria have partnered with scientific researchers to examine more than 40 years of spearfishing competition data to find evidence of the impacts of climate change.

Researchers and spearfisher representatives began exploring project opportunities in late 2008 to understand the feasibility and support for such a challenging project. Many long-term spearfishers showed immediate support, seeing the opportunity to have their data and decades of observational knowledge valued and recognised by science and management. A number of challenges were also recognised, and considerable time was devoted to understanding these and finding ways to ensure spearfisher interests and concerns were recognised and addressed. Reluctance largely reflected earlier collaborations and/or interactions with management in which spearfishers felt their concerns hadn’t been acknowledged or valued. Data-use agreements to formalise data ownership and data use were seen by all parties as the best way to ensure clarity, and the project was initiated in early 2011.

Another challenge was locating datasheets, many of which were dispersed among longstanding members. Many members, especially club records officers, have long appreciated the value of these data and many have meticulously archived thousands of paper score sheets. But many more have unfortunately been lost or destroyed over the decades. Collation and assessment of remaining data was seen as one of the key activities and benefits of the project. Clubs will also benefit from receiving a database of all records digitised during the project, allowing future updates to the database and making club record-keeping easier and more comprehensive.

The research team includes spearfishers who were also scientists, ensuring the project was developed collaboratively from inception. Representative organisations in NSW and Victoria were also invited to nominate a member to join the research team as a scientific liaison officer, providing a direct line of communication to the club executive as well as co-authoring papers and reports. Inclusion of these roles ensures club representatives have direct involvement in analysis, interpretation and reporting of data. Researchers also met with members and executive, initially to directly communicate the aims of the project, and later to discuss early results and to ask for feedback and suggestions from members.

Recent range extensions have been well documented globally for numerous coastal biota (otherwise known as fish for you lay people!), changes are largely attributed to increasing average sea-surface temperatures. Changes have been similarly documented for marine species in southeastern Australia, where waters are warming between three and four times faster than the global average.

There are few long term, high quality datasets from the region that are suitable for examining multi-decadal change. Researchers therefore turned to spearfishers to undertake a collaborative project examining change in eastern Australian coastal waters, and to assess what historic data remains. Spearfishing competitions may involve dozens of divers, with fish captures recorded on pre-printed score-sheets that specify target species, minimum sizes and allocate points for each species. Competitions are hotly contested and species identifications and data integrity are therefore closely monitored to ensure points are awarded fairly. Like many community clubs, competitions rely on a dedicated core team of organisers, ensuring consistent record keeping and consistent species identifications. 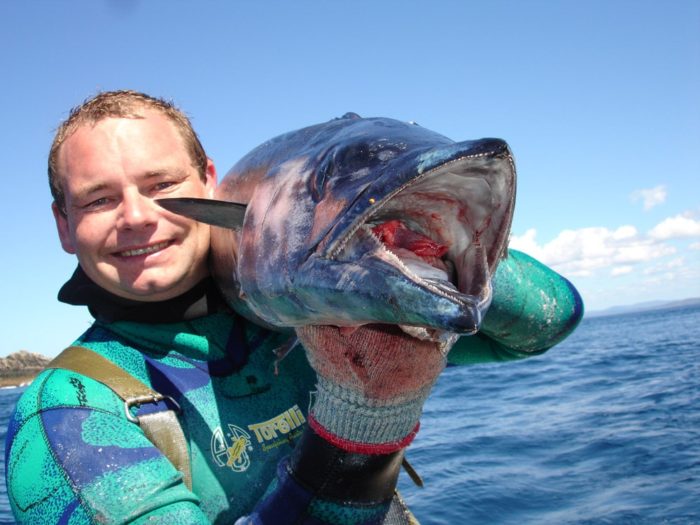 The project will help recreational fishers better understand change, and to adapt to changing conditions. Adaptation can be either a natural or directed response to change. For example, fish may adapt to warmer waters, and not show any change in distribution, while others may move considerable distances. Changes can manifest as extensions to a species distribution range, and changes to the community composition. In this project we are particularly interested in helping ‘adaptation’ by fishers – by better understanding the possible changes in their activities in response to warming marine waters. We already know that many fishers are already adapting, and the targeting of new fish species in private trips or competitions is but one example.

Changing species observed along the coastline may also mean that some fish are becoming less common, so longer trips may be needed to catch these species now, and in the future. There may be changes in the availability of preferred species for eating – which may also impact on the recreational experience.

We are also working to better understand and document the past experience of fishers working with management and scientists, and their perceptions of the rate and cause of change. Stephen Sutton, a James Cook University researcher, is leading these aspects of the project, and has surveyed members to better understand this experience and history. 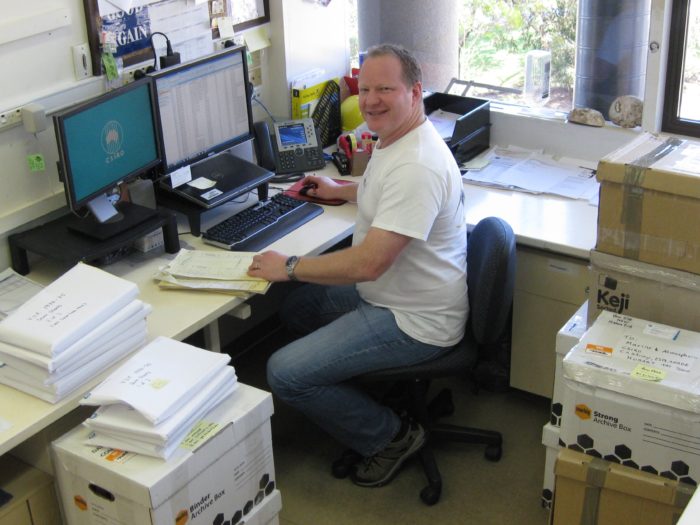 Data manager for the project, Matt Lansdell wading through boxes of spearfishing data

The earliest competition scoresheets located were from a competition held in NSW in 1961, with consistent data available from late 1960s until 2011. Data were digitised from a total of 607 spearfishing competitions, 267 of these competitions were held at 43 sites in Victoria and 335 held at 50 sites in NSW. Competition locations ranged from Coffs Harbour in NSW to near Portland in western Victoria, representing >19,000 ‘diver days’, nearly 130,000 individual fish and >150 species.

These ‘fish’ data represent the most comprehensive, multi-decadal digitised records based on recreational fisher activities in Australian waters from which to measure climate-based impacts. Quantitative analyses demonstrate a ‘tropicalisation’ effect (increasing percentage of tropical species) and a change in trophic level among fish communities from NSW waters.

Some species also show evidence of range extension in southeastern Australia, while others appear to have increased in abundance within the southern limits of their previously recorded range. These data demonstrate the complexity of changes occurring in natural communities, providing new understanding of ranges, range shifts, and movement, and aid in ongoing engagement with spearfishers as they seek to understand the impacts of climate change on their recreational activities.

The collaborative project between the CSIRO Climate Adaptation National Research Flagship, James Cook University and the Australian Underwater Federation, is working directly with spearfishing representative bodies, Southern Freedivers from Victoria, and the Underwater Skindivers & Fishermen’s Association from New South Wales. The project is supported by funding from the Australian Government Fisheries Research and Development Corporation and the Department of Climate Change and Energy Efficiency.

Stay tuned to DeeperBlue.com for the exciting analyses of these collective efforts, all designed to support the marine resources we all enjoy.

Daniel is the Research Leader for the Fish Biogeography and Taxonomy Team based at CSIRO’s Marine and Atmospheric Research Laboratories in Hobart.

Daniel Gledhill
Daniel is the Research Leader for the Fish Bio-geography and Taxonomy Team based at CSIRO’s Marine and Atmospheric Research Laboratories in Hobart. The team manages CSIRO’s Australian National Fish Collection, using the collection to examine historical and present-day processes responsible for creating and maintaining distributions of fishes, as well as preparing user guides, such as The Australian Seafood Handbook and Sharks and Rays of Australia, and taxonomic and biogeographic publications.