Georgetown, Grand Cayman BWI -Tuesday, May 1st saw the end of the 2nd PFI Cayman Competition held over four days on Grand Cayman, BWI.  Eleven international athletes from across the world spanning Canada, USA, Japan, Brazil and the UK competed in 6 freediving disciplines involving time, depth and distance with points being awarded per meter of depth, distance and time.  Most amazing was that one world record and eleven national records were broken during four days of intense competition. 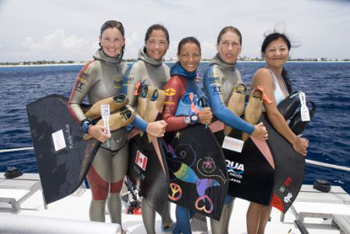 Performance Freediving International Inc (PFI) was the organizer of the competition as well as providing two weeks of coaching and Advanced Freediver training for all the athletes in attendance.  PFI has been involved in providing educational courses and athlete development since February 2000.  During this time its Founder and President, Kirk Krack, has trained/coached and supported 8 world record athletes to over 20 world records along with numerous national record holders.

The premiere performance was that of Mandy-Rae Cruickshank of Canada who on day two of the competition broke the women’s world record in constant ballast (kicking down to depth and back with weights under her own power) with a depth of 88m / 289ft on one breath of air, the equivalent of a 29 story building in a time of 2 minutes 48 seconds.  This record was held previously by Natalia Molchanova of Russia at 86m / 282ft.  Mandy-Rae now adds a seventh world record to her trophy mantle. 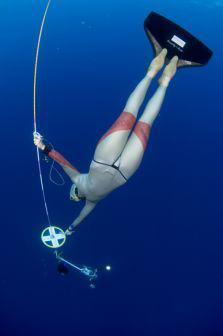 The 2nd PFI Cayman Competition is supported with the generous financial help of ICU Medical and the Hyperbaric and Problem Wound Center at Mercy Hospital in Miami, Florida.  Stingray Watersports of Grand Cayman is helping provide diving and accommodations.  Professional equipment is furnished by Oceaner Sporting Goods and Yamamoto Corporation with additional support provided by Doc’s Proplugs.