August 4th – 12th 2004. Vancouver, Canada. It seemed like only yesterday that AIDA International announced that Kirk Krack and the team at the CAFA (Canadian Association of FreeDiving and Apnea) won the bid to host the 4th Team World Championships.

Now, as I type this, there are only 16 days left to the start of the competition where 85 Athletes and Coaches, spanning 11 Countries, 19 Teams and 4 Independent Athletes, will decend on the University of British Colombia to fight it out to see who will emerge as the World Champions this year.

With the BIOS Freeology Open Classic in Cyprus earlier this year, attendance to the World Championships may seem lower than in previous years. People have commented that the lack of Italians (who are still boycotting AIDA competitions) and the French will mean that the usual European showdown won’t be the order of the day.

Personally i’m excited as other countries will be given the opportunity to shine. Will Venezula, with Carlos Coste (current Constant Ballast World Recorder Holder at 102m) come out top? Or perhpas the favourites will be the home nation of Canada who have a strong tradition of FreeDivers to draw upon. Then again after watching the UK Team being selected earlier this year I have to say that they might pull out some interesting performances. 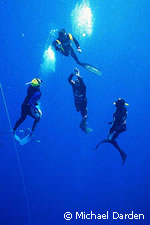 This competition also promises to be the most media friendly event to date. The organisers have worked extremely hard to bring you an interactive experience at http://www.aidaworlds2004.com where athlete performances will be seen in almost real time and the shifting rankings can be watched all over the world. DeeperBlue.net is also the offical Media for the competition and have a team of photographers and journalists on location to bring you photos, interviews, profiles and analysis as it happens! Between the Worlds site and this DeeperBlue.net Special Feature (bookmark http://www.deeperblue.net/worlds2004!) you can sit back in your armchair and feel the excitment build!

In the next 2 weeks i’ll introduce you to the team and we’ll bring you an exclusive look behind the scenes at the organisers of this fanastic event! So join us next week for the next lead-up article or in the meantime why not discuss the competition in our Special Forum?

COVID-19’s Impact On The World Series Of Freediving

Vertical Blue recently put out an announcement regarding the impact of the COVID-19 pandemic on the World Series of Freediving.
Read more
Freediving

We talk to French-Canadian Freediver and Spearo Valentine Thomas about her mission to bring awareness when it comes to seafood consumption.
Read more

Tektite announced that it will be producing face masks and face shields to protect against COVID-19.
Read more

Can I Have This Dance??

Check out our latest Photo of the Week - Can I Have This Dance??
Read more