Somtimes you have it, sometimes you don’t. Unfortunately for Kiwi freediver Kathryn Nevatt this past week placed her achingly close to achieving a new world record in the freediving discipline of dynamic no-fins (DNF) which ultimately eluded her. The 33-year-old architect was one of two freedivers making mutiple attempts to set records at the Genesis Recreation Center pool in Masterton. Dave Mullins from Wellington was also on hand to try to break his own men’s world record of 218m but was quick to admit he was “pretty much out of form” after coming up very short on each of his three performances.

Back in 2009 Russian Natalia Malchanova set the current women’s world record of 160m DNF and although Nevatt smashed that distance on Sunday with a swim to 164m the judges had to disqualify her enormous dive after she failed the surface protocol on two counts. AIDA International judge Grant Graves ruled on Nevatt’s short periodic losses of consciousness, which caused her to dip her head at the surface. “When you are going for a world record everything has to be okay. We judge on what we observe – we had no option but to red card.”

While Nevatt seemed sure that she was completely conscious all the way through and that any movement of her head was more of a shake than a dip, she recognizes that the judges are very experienced at their job, and accepts their ruling.

“It’s all over now. No new world record,” Kathryn posted on Facebook. “I managed 5 dives in 6 days between 156m and 164m, generally disqualified for nodding my head after surfacing (viewed as lack of consciousness) but I didn’t need support from the safety for any dive and a couple of them I was very conscious throughout, including the 164m, but alas I did not win the protest (big samba).

Considering she had no recovery time after all of those big dives, her performances are  quite a feat regardless.

“If I held the record I’d want the judges to make the tough decisions, so I just have to live with it. Sure, it is disappointing but there is always another day. We will be back,” she said. 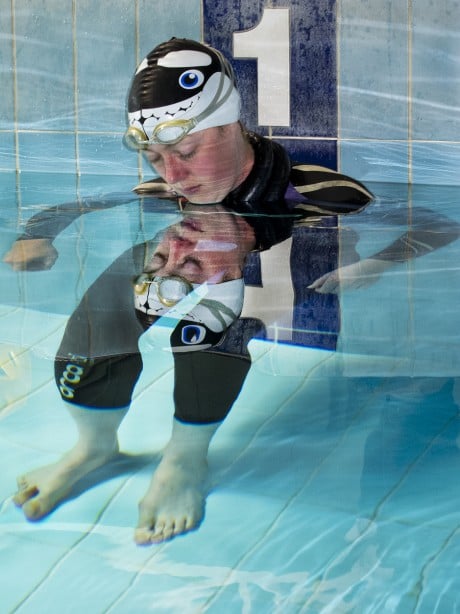