Experts believe that an all femalefish species has survived for 70,000 years without reproducing sexually. 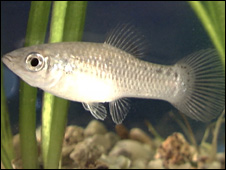 Scientists from the University ofEdinburgh think the Amazon Molly may be employing special genetic survival”tricks” to avoid becoming extinct, including the possibility of occasionalsex with strangers (quoted from Dr Laurence Loewe, of the Universityof Edinburgh’s School of Biological Sciences). The species, found in Texas andMexico, interacts with males of other species to trigger its reproductionprocess.

The offspring are clones of theirmother and do not inherit any of the male’s DNA. Typically, when creatures reproduce asexually,harmful changes creep into their genes over many generations. Researcherscalculated the time to extinction for the fish based on modelling geneticchanges over many thousands of generations. They are now able to say conclusively that thefish ought to have become extinct within the past 70,000 years, based on thecurrent simple models. Scientistsbelieve the fish, which are still thriving in rivers in south-east Texas andnorth-east Mexico, are using special genetic survival “tricks” tohelp them stay alive.

The Edinburgh-led study was carriedout in collaboration with Dr Dunja Lamatsch at the University of Wuerzburg, nowat the Austrian Academy of Sciences.

The research is published in thejournal BMC Evolutionary Biology.

Traveling By Air With Freediving Gear