No Charlie in thetitle, but Freediving instead as it is the drive and the passion that bringsFrancine Kreiss (France), Jana Strain (Canada) and Maccarena  Benitez (Chile), to the competitive arena.There are a lot of new competitors every year in (both AIDA and CMAScompetitions), but I wanted to narrow my search to three women that I believedto be the most representative of that new generation. I spent some timeinterviewing the three of them asking about how they got into the sport andwhat are their aspirations in this fast and ever changing freedivingcompetitive realm. 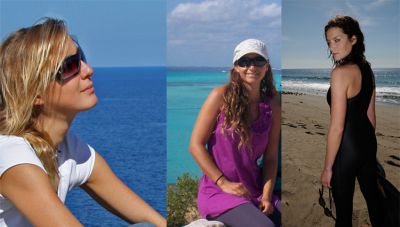 The first interview started with Francine Kreiss the newathlete of the French female freediving team. I first heard of her before the world championship last year in Egypt asmy good friend and French coach Gregory Piazzola, told me that a new femaleathlete was to step in, to the side of talented Julie Gautier and Solenn Launay(The Team ended up taking the 6th place in the 2008 WorldChampionship). I had never met, or even talked to Francine before I called herso I was a tad anxious. When the southwest accented French voice answered thephone, I immediately felt the conviviality characterized by people from thisregion of France. “Salut Nico!” she said as if we had known each other for awhile. As we are both passionate about the blue and freediving in particular wechatted for an hour that felt like 20 minutes. Born and raised close to thesurfing French mecca of Hossegor, Francine is a water baby and has always beenaround the ocean. “At 10 years old I use to grab my snorkel and fins andsilently sneak out of the house at 5 o’clock in the morning to go see thefish!” A surfer, she stumbled upon freediving using it as a tool to give heraccess to bigger waves. She got hooked on apnea right away  “Je me suis laissee prendre au jeu” (I gotcaught in the game).

For personal reasons, she moved away from the west coastand ended up in the south of France close to Marseilles. Pursuing her breathhold solo adventure in the Mediterranean sea and hitting 15 meters, she figuredout it was time to learn the rules if she wanted to go further. She tried toconnect with some apnea club in the area but her busy schedule did not allowfor this to work out. Eventually,  mothersynchronicity placed world record holder freediver  Stephane Misfud in heroffice (Francine is a graphic designer) asking her to design a poster for an upand coming competition.  She first askedhim for some safety questions and soon was invited to train and compete withthe Misfud crew.

At first “I did not want to compete” Francine confides thatshe is not a very competitive person. Stephane explained to her that it was nota competition against the others but rather with herself to find her potentialand most of all it was a platform to meet other freedivers and have a goodtime.  She went “Since we had good laughs,I decided to continue”. Then it was training with “La gueuse”(the sled) inPort Cros and the first constant weight dive to 30 meters “I wanted to see howdeep I could go and look up, I love the feeling of having a column of waterover my head I find it exhilarating”. Francine admits that the 30 meter divewas easy and she did not experience pressure as of yet. It is later on in sept2006 , when she trained with friend Marco Circosta and his best friend Umberto Pelizzari at an Apnea academycourse in Spain, that “pressure appeared in my freediving world!”

She gothooked on spear fishing now and then. In 2007 she met up again with Marco andUmberto to train and hunt in the waters of Sharm El Sheik, Egypt. Something youhave to know about Francine Kreiss is that she hates numbers, every time Itried to get at to where she was at and where she wanted to be as far as depthand times go, she refused to answer and humored her way out of it. Whenasked  about what was her favoritediscipline in freediving she answered “Spearfishing!” I meant dynamic, CWT,static or else Francine!! “I am not a big fan of dynamic for me freediving isabout freedom and wide open spaces so going back and forth in a four walledwater environment is not much fun! Static on the other hand is a relaxingdiscipline, I like it as it is about making fun of the chronograph and time ingeneral, all of which while taking a nice nap! My favorite discipline then hasto be constant weight!”

I concluded the interview with Francine asking herabout if she would consider pushing further as an athlete or else in the everevolving world of freediving. “As I told you before I like to have fun with itbut I am not one to constantly push the limit and go after numbers andperformances, freediving is fun and provides me with an intense sense offreedom. I could see myself finding a way to share this experience and maybeteach why not? Sharing the fun is what it is all about. As for here and now myfavorite thing is still to wake up early in the morning and sneak outside thehouse to go spear fishing or just diving to admire the underwater world (She pausespensive) It gives me an extraordinary boost for the rest of my day.” Francineis a great athlete but most of all a passionate being. She lives for thosemoments in the blue that a few of us have had the chance to experience, thosecharacterized by absolute freedom.

Jana’s story is yet another chapter in the now growing bookentitled:”How I got Hooked On Freediving”. Born in Edmonton, Alberta Canada, Jana was quite far from the cold Ocean but was attracted by the waterworld  nevertheless.” Well at first, Ithought I wanted to become a dolphin trainer, part of the test was to be ableto swim 120 feet underwater a on a single breath, at the time, I thought thatwas just crazy and impossible!” We both laughed as Jana today holds the NorthAmerican record women dynamic with 171 meters (571 feet). A friend of hers toldJana about freediving courses with Kirk and Mandy Krack at PFI (PerformanceFreediving International). Now to put this information into prospective, Janatook her first freediving course with PFI beginning of 2008 a few months afterin October, she was already breaking records, needless to say she is anatural.  “After the clinic, Kirk andMandy invited me to a competition in Vancouver,   I did very well , and made the nationalteam”, she said rather causally.  Janafinished her PFI course in May and in between that time and the world Championships in Egypt, she went training in a25 meter pool “4 times at most” she did a 153 meters in dynamic! “When I cameback from Egypt I realized I was pretty good at dynamic and decided to pushfurther by training hard for a month. I eventually broke my own record with 171meters.” Jana has always been attracted by the blue, she trained swimming  until she was 12  and then became  a pro level dancer.  “For me Freediving is a lot like dancing,especially dynamic because you are constantly moving”. While Jana favorsdynamic she admits her total dislike for the static, and having “pressureissues” with constant weight.   When shementions this, and knowing that Jana has gotten into competitive freedivingonly a year ago I can’t stop myself from hearing Aharon Solomon’s words ofwisdom: “It takes time for the body to adapt, so give time for physiologicaladaptations!”

The Blue eyed face of the old man fades away (NDLR he is going to kill me for writingthis!) I am now focusing again on Jana’s soft voice. I continue on the sameline of questions that I used with Francine as I feel the contrast revealingitself ,question after question producing an HDR (High Dynamic Range)photograph and portrait.  I asked whatwas her goal in freediving and what did she want out of competition. She pausesfor a split second and say “Well I come from a competitive background, as a preteen I use to compete 8 times a year in dancing, I am focused, the goal is topush myself and see where I can go with it” She then continue on a lighter noteexplaining that since Egypt she has not been able to jump into the southernCalifornia ocean where she lives, ” I have been spoiled !” Luckily she madefriend with Will Trudbridge who invited her to train in the crystal clear andmost of all warm waters of Dean’s blue hole (this year up and coming worldchampionship grounds and the home of Vertical Blue).  Although Jana tells me she does not put manyexpectations on herself and is moving one step at a time, I believe her stepsare big ones. I do not know her much but one thing that surely comes across inher interview is the fact that she is a driven individual.  She has proved with her first year in thecompetitive realm that she is to become one of the key players in Womencompetitive freediving for the years to come.

The third apnea angel is a friend. I met Maccarena Benitez 3years ago training on the beach in baja California with Aharon and MT Solomon.Chilean born “Macca” spends most of her time in Mexico. These days she lives on”Murielle” a gorgeous sail boat/yacht that she and her boyfriend charter www.yatemurielle.com. She spends mostof her time in the water from Isla Mujeres off the Yuccatan peninsula to thesea of Cortez, Maccarena lives what I call the liquid life.

When asked how she became a freediver she answers: “Itwas four years ago, I was at school studying Marine Biology in Mexico, andone day there was a conference about freediving en mi Universidad.” Theconference was given by Aharon and MT  “Iwas hallucinating, this was exactly what I needed in my life!” right after itshe signed on for a course with a few of her friends. During the course MT lether try her monofin,  “I felt fluidity inmy body for the first time! ” she ordered a monofin right after the course andhas “never left it behind ever since”. She continued training with the Solomonand was invited to her first competition in Los Cabos in 2005:”I did well andsuper relaxed, I loved it and was hooked right away”.

In 2008, she was invited to the Aida Mexico National Opencompetition in Baccalar. “The Cenotes are a magical place to dive, you canalmost feel the historical background of these waters when you dive, it istruly incredible!” With a 1’50 mintes dive to 40 meters she became the deepestChilean woman in constant weight with fins. I was in Bacalar for thecompetition covering the event for Deeper Blue, I remember the face of thejudges when she surfaced,  1’50 is on thelong side for 40 meters. Maccarena was all smile “I was so relaxed she said, Ienjoyed the dive so much that I took my time!”

Macarena is definitely a promising athlete she will bringthe Chilean touch to the up and coming AIDA world championship at the BlueHole.

I have to admit falling completely head over monofin forthese three ladies. They are talented, driven and accomplished individual.  While coming from different culturalbackgrounds and having different approach to the sport, the common thread intheir personality is their passion for Freediving and the underwater world.Keep a close eye on each of these three athletes, as they might very well bethe next one to push the limit further on the feminine side of the sport

Down below, beholdthe silence and discover a new dimension in time. Instants that can be consumedin every fraction to be lived to the full, with amazing intensity.
-Rossana Majorca

Nico Dananhttp://www.oceanminds.com
I curate OceanMinds where fish get their news. A multilingual digital jack of all trades, underwater creature mostly, I am a chocoholic who believes in mermaids.