William floats silently – breath held, his whole body exposed, face-to-face with a gigantic tiger shark.  Why has he presented himself, unarmed, at the jaws of this massive apex predator?  Some have attributed his actions to thrill seeking and bravado, but in an interview with this world class athlete, I learned his motivation is much more interesting and purposeful than that. 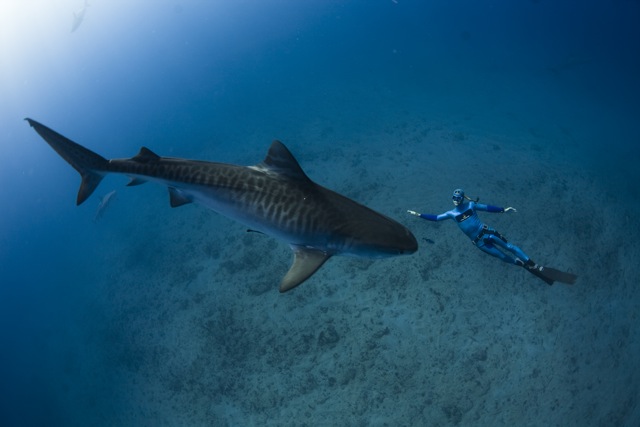 William Winram has spent most of his life in and around the ocean – free diving, fishing, surfing, and now working to gather information and spread education about the most misunderstood creatures of the sea.  Today, as you’ll find on his website, William holds a number of unusual job titles: Shark Publicist, Ocean Environmentalist, Underwater Model, Photographer, and Videographer.

His fascination with sharks began at an early age, then gestated into a career after a life-changing encounter with a 13 foot tiger shark in Baja, Mexico.  While spear fishing one morning, he became aware of a huge shark following him.  For a moment, the terrible images of Hollywood movies flashed through his mind, but he remained calm and swam slowly toward shore.  The shark kept a safe distance, followed him to shore, but backed off.  William suddenly had an impulse: he faced the shark and  swam right at it, as aggressively as he could.  To his surprise, it quickly darted off.  But the shark didn’t leave, and over the course of the morning, he engaged in a curious dance – swimming towards, then away from the shark, as it did the same.This was a turning point in William’s understanding of sharks.  This experience didn’t make sense with what he had learned and read in books, and he couldn’t find studies that described this type of behavior.   At once, he became committed to learning more about shark behavior. 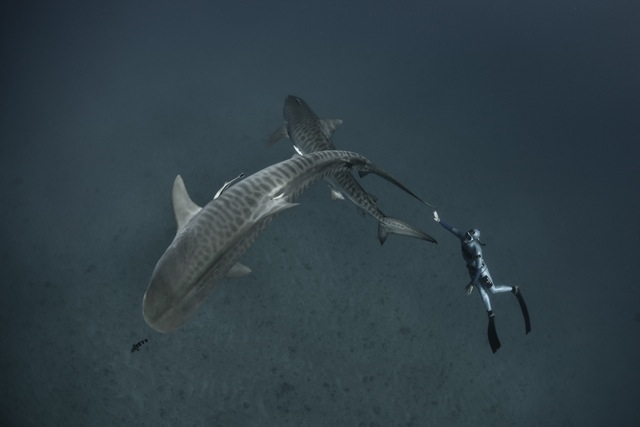 What William has learned is that sharks are complex, curious, and timid.  He uses his own resources to travel the world and document his encounters with sharks.  The photos and videos he and colleague Fred Buyle produce give people a completely new perspective on sharks.  He says, “If sharks are really man-eaters, then it would not be possible for us to capture photos like these.”   He has worked with a number of researchers and projects, such as the Malpelo Foundation to tag sharks and collect much needed information about many types of sharks.   William and Fred hope their photos and upcoming documentary films convey a connection to the ocean, even for people who don’t live anywhere near water.  They also hope that their work will raise awareness of the serious threats that put many of the world’s sharks in grave danger. 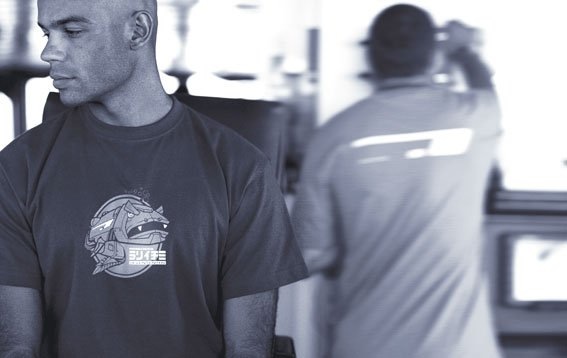 Between 26 – 73 million sharks are killed each year for their fins, which are used to meet the exploding demand for shark fin soup.  The International Union for the Conservation of Nature defines shark finning as “the removal and retention of shark fins and the discard at sea of the rest of the carcass.”  The demand for shark fin soup has increased so much that shark finning can be found worldwide.  Without regulation, the near valueless carcass of the shark is thrown overboard, only utilizing about 2-5% of their bodies.

Although shark fin soup has been a popular Chinese entrée for years because of its association with prestige and privilege, many people are pledging to help protect sharks (see, APAOHA Background.pdf) and honor even older tenets of Asian philosophy that emphasize the importance of harmony between nature and humanity.  Concerned individuals across Asia – from China and Taiwan to Singapore and Hong Kong – have formed shark protection groups to highlight the plight of sharks.  A growing number of governments have outlawed removal of shark fins  from shark bodies on board fishing vessels.  Some governments and businesses in the Pacific region have pledged not to serve shark fin soups at government functions, business meetings, or celebratory banquets.  A number of globally recognized Asian chefs support making celebratory soup from shark fin alternatives. 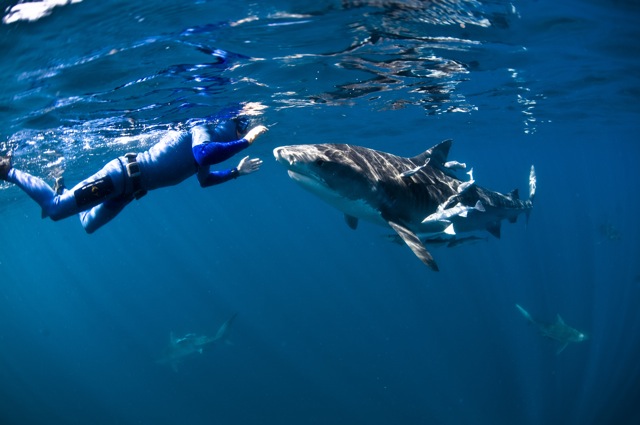 Following the lead of Hawaii, which banned the possession, sale, trade, and distribution of shark fins, California’s Assemblymembers Fong and Huffman announced Assembly Bill 376 that will do the same in the Golden State (see AB 376 Fact Sheet.pdf) Shark fin soup is served at a surprising number of restaurants in California  the state’s action to ban finning will send a strong signal to other places where shark fins are consumed.

As Fred Buyle’s gorgeous, dramatic photos of William portray, there is a lot more to sharks than Hollywood stereotypes convey.  Sharks are powerful and fascinating, but the truth is, their populations are in danger because of human behavior.  Because sharks mature very late, have few young, and are long-lived, they are particularly in danger of overexploitation.  Last Friday, the Guardian highlighted a report released by the Pew Environment Group, describing their plight and the need for immediately improving shark conservation.

Fortunately, concerned citizens, businesses, and decision makers are standing up for a simple change that could mean the survival of these powerful creatures.