C4 – The Kingdom Of Carbon Fiber

Marco Bonfanti came from Bianchi bicycle company and started in 1986 to produce carbon fiber chassis for such sector. At that time carbon fiber was an incredibly new material, in fact it had been applied for the first time in F1 on the McLaren MP4/1 in 1981. Only a couple of years later Bonfanti, following his incredible passion for spearfishing, decides to start working on some prototypes of carbon fiber fins and since then C4 carbon fins have been synonymous of quality, performance and, of course, advanced material technology. Today C4 produces a wide range of carbon fiber fins and spear guns. Followed by many companies in Italy and around the world, C4 is for sure the kingdom of carbon fiber applied to spearfishing and freediving.

C4 represents state of the art technology in composite materials and has constantly developed its products to be leader in advanced solutions for freediving and spearfishing. Starting from the use of carbon fiber for production of fin blades, to inventing the left and right foot pockets, of course patented, to the utilization for the first time ever of water rails on fins, Marco Bonfanti has always kept C4 at the highest levels of research and development for best efficiency of his products. Such products continue to look at materials as a crucial aspect for reliability, durability and performance. 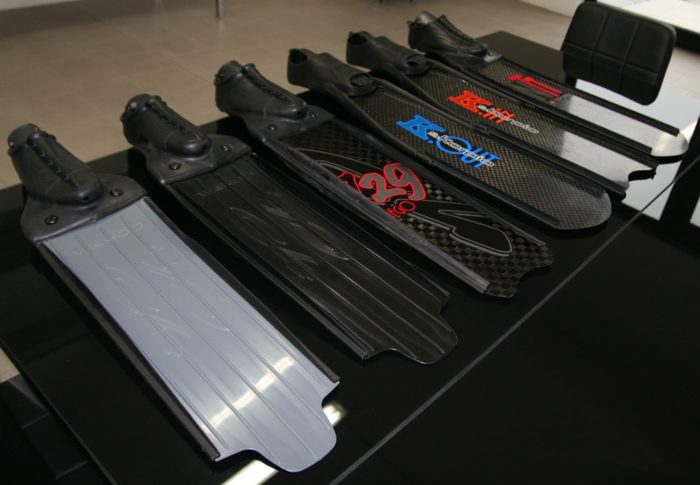 Based on this, the new fins product line of C4 is manufactured with T700 composite material, which is defined as a standard elastic modulus (capacity and speed of the material to return to its position after having been bent) and high resistance (to breakage) carbon fiber. The wide bands of the weaving of the T700 compared to traditional carbon fiber cloth reduce the number of total weaves, weaves that create friction and bend the extremely thin wires of the fiber. These two aspects, friction and bends, generate negative effects on performance of the blade. Reducing such phenomena by the use of T700 results in 40% higher resistance and much better elastic return of the blades, generating more efficiency (more push and less fatigue)  when diving. This is today, in Bonfanti’s opinion, the best solution in the carbon fiber industry. T700 is more expensive and less diffused than traditional carbon fiber (T300 for example). Moreover, C4 has sufficient strength and is large enough in the carbon fiber world to order sufficient volumes of material to carbon fiber producers and ask for specific technical parameters, which are the ultimate advantage of C4 fins. 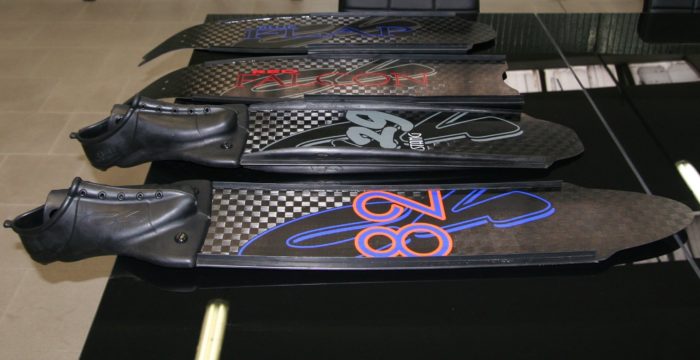 The newest fins by C4 are the 729 Mustang, now at their fourth evolution started in 2006. T700 carbon fiber, increased total length of the blade up to 85.5 cm, while width is kept at 20 cm, amplified angle of the blade up to 29°, to which 3° of angle given by the foot pocket have to be added, are the main novelties of these C4 top of the range fins. Just consider that the first fins by C4 had a total angle of 17° between foot and blade.  Why shift to such higher angles? Total 32° between foot and blade permit a much better fluidity of the diver wearing fins. In fact, the higher angle permits the body of the diver to proceed with a more straight position on a longitudinal direction, meaning a smaller frontal area, which cuts better through the water during the dive. This effect is particularly evident in the up and down movement, less during the surface swim. The new progressive EVO water rails adapt to the speed and thickness of water flow on each section of the blade and make a tunnel effect that reduces turbulence at the end of the blade.  The terminal profile with a semi-circular shape also aims to reduce such effect. These solutions are also applied to the rest of C4 fins line, such as the 729 Fuego, which has a slightly shorter blade (830 cm) and a more traditional concave terminal profile. 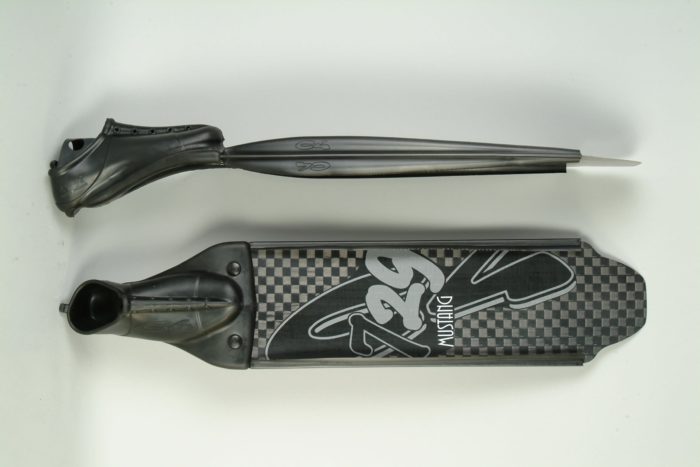 For freediving longer fins as the 82 have been designed, with 100 cm long blade, but a thinner section of 19.7 cm.

Outside the carbon fiber world are the Wahoo Dark (medium rigidity) and Wahoo Fog (soft rigidity), which are the only polymer blade fins of C4 product line. They maintain most of the innovations of C4 such as anatomic foot pocket, increased foot/blade angle, flap profile, progressive EVO water rails, but work with a more economic plastic material.

Traditional foot pockets are used with the Red Falcon fins, whose predecessors, the Falcon, have been winners of constant weight records with Umberto Pellizzari and have reached also the unbeaten record of – 93 meters with Martin Stephanek. Dimensions are 86 cm of length and 20.7 cm width.  Blue Flap has 87 cm length and 20.7 cm and a terminal flap. The effect of the different terminal profiles of Red Falcon and Blu Flap generate differences in the feeling and behavior of the two models. The first (Red Falcon) charge more water at the start of the stroke and give a harder feedback and a faster initial acceleration, while the Blue Flap feel softer and give more maximum speed.

After the initial production of fins, also spearguns have been added to C4 product line, exploiting the stiffnesss and light weight characteristics of carbon fiber. The particularity of C4 carbon fiber spearguns, which has hit the market years ago, is the fact that for the first time a speargun has been produced as a single peace carbon fiber (NJC: No Junction Construction). Previously, but still today, many carbon fiber spearguns are just partially made with such material and in the most simple solutions put together a carbon fiber round section tube with the handle and trigger system. This of course limits the exploitation of the stiffness qualities of carbon fiber, as the point of junction between the tube and the handle-trigger system will always have a weak point stiffness wise. Same thing applies to the weight exploitation, where of course any other material with which the handle structure is built in will be heavier than the incredibly light carbon fiber.

Without going through all of the complete speargun line, what must be said is that the use of T700 carbon fiber added to the NJC system gives C4 products an incomparable stiffness, which clearly leads to best precision in the shot. Moreover carbon fiber gives the possibility of having a very limited 360 degrees section of the terminal part of the barrel, added to unbeatable light weight characteristics, leading  to incredible brandishing capacities.

It is worth taking a look at the newly born Mr Dark speargun, which has very unconventional proportions, indicating very deeply thought and analyzed solutions. Starting from the position of arm and hand in designing each speargun, as Bonfanti points out, Mr Dark is has an incredibly reduced frontal section of the barrel, matched with a much larger section near the trigger. This aims to confirm the very easy brandishing, but also stabilize the speargun thanks to such larger section and an increased weight in the area near the grip, where movement is limited when turning the speargun to aim to a prey. This is the way, as Bonfanti says, to obtain an increase in the weight of the speargun, which means much better stability, with no loss in the brandishing characteristic.

No guns but carbon fiber fins in the product range by Skorpio, the brand born to offer a more affordable product based on solutions already engineered by C4, that have had good success in the market and extremely positive results in efficiency and durability. All this of course manufactured with always the most modern techniques, keeping quality and performance at top levels, continuing constant improvement of every Skorpio product.  An example of this is the use until 2013 of both T300 and T700 carbon fiber on Skorpio fins, but starting from 2014 the upgrade to the latest technology of 100% T700 carbon fiber. 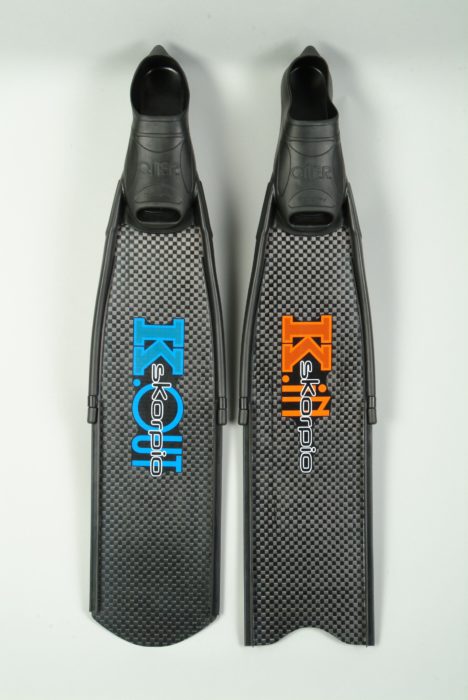 Skorpio product line is based ultimately on fins and has 4 different models: the NTT, the K-IN and K-OUT, which differentiate by the shape (convex externally, for higher speed, and concave externally, for better restarts) of the terminal profile, and the Marathon. Skorpio fins also make use of C4 patented left and right foot pockets, but not of the patented EVO water rails, which are exclusive of C4. Skorpio have instead more traditional and easy to use constant 12 mm height water rails and all have a 25° angle blade. As for C4 carbon fiber fins, also all Skorpio models come with three different stiffness: 25 (soft), 30 (medium) and 40 (hard).

To find out more about C4 products you can head to their website http://www.c4carbon.com/

We talk to French-Canadian Freediver and Spearo Valentine Thomas about her mission to bring awareness when it comes to seafood consumption.
Read more
Spearfishing

The spearfishing legend, Jay Riffe, has died at the age of 82 while at home in California.
Read more
Freediving