Well here it is – the news of the competition, the final day of Constant Weight competition with three attempts on the world record, all of them over 100 metres. All these results are unofficial but we’ve been pretty accurate so far…

And so – Carlos Coste of Venezuela new Constant Weight World Record of 102 metres, Martin Stepanek of the Czech Republic turned at 98 metres, Herbert Nitsch of Austria turned at 88 metres.

Martin was the first down and was visibly shaking from cold. His coach, Lotta Ericson, tried in vain to rub warmth into his back as he breathed up but the shivers didn’t stop. He spent a good thirty seconds packing and then was off, only to return about two and a half minutes later cleanly but without the tag. Back on the barge I asked him what happened and he told me that the cold had really affected his performance. ‘I’m usually the guy with no equalisation problems but the cold affected my diaghragm really bad and I lost all my flexibility.’ His last equalisation was at 90 metres and he said it was awful having to stop at 98m with the tag in sight. ‘It seemed just a reach away’. I told him that he had made a good decision and he laughed. ‘My doctor would agree but my coach might not!’ Still, a new Czech National Record is his, and 98 points leaves him in second place overall so far.

Carlos was next up and seemed calm and in control. His breathe-up was relaxed and he disappeared as Martin was making his way back to the line and Herbert was arriving. On the way back up there was a shout that he had got the tag and he emerged clean but obviously cold. Back on the barge he was all smiles as he talked me through the dive. ‘I was very calm and I tried not to notice Martin. About half way down I was fearful but kept thinking good thoughts and then I felt better’. Now he’s on top of the world!

Herbert seems to be destined always to follow the other deep divers and this affected his preparation. ‘I was watching Carlos and started my breathe up too late. The result was that I didn’t pack enough and almost was disqualified for going too late’. He had to turn at 88 metres as he had run out of air to equalise with.

Still, all three divers have done 105 metres in training so this incredible record shouldnt stand for long. 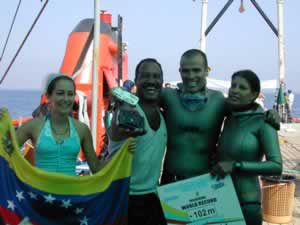 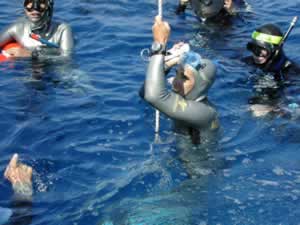 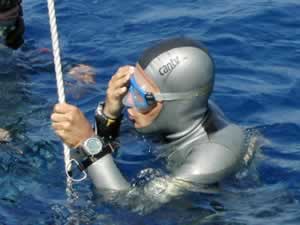 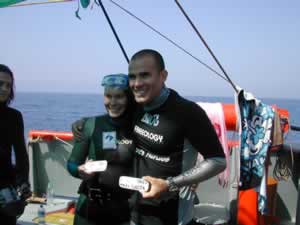 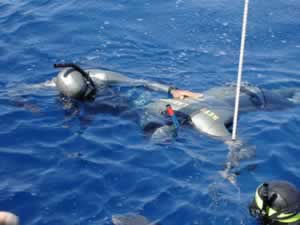 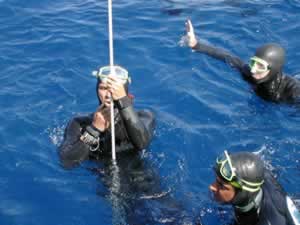 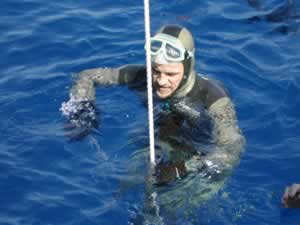 Natalia Molchanova asked if she could do the dive that illness had prevented her from doing on Tuesday. The judges agreed but said that in terms of the competition she would still not receive any points as she’d missed her official top time. She powered to 65m and back to a new National Record for Russia! 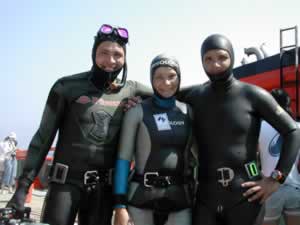 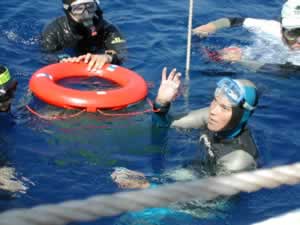 Peter Colat dived on the first day but the judges told him to go too early and so he had to go ten minutes before his official top. He asked if he could do the dive again as he only reached 55m and was trying for the Swiss record. He dived after Natalia but only reached 59m and then suffered LMC.

While marvelling at the three deepest divers of the competition we must not forget the other performances that happened today. This morning saw 20 athletes from 9 different countries competing with depths ranging from 16 – 103 metres. What makes this comp so unique is the opportunity for athletes of all levels to compete. I know all too well what a first competition feels like and last year I found myself diving 32 metres just after both Herbert and Martin.

Donna Ryan of the UK did a very comfortable 28 metres, a PB, as did Guy Richardson with 32 metres. Chieko Yamano of Japan did a great 26 metres and Koichi Takemura did 35m after having to dive twice, as the line was at the wrong depth first time round… And new mother to baby Freya, Sally Greatwood of the UK did a relaxed 16 metres! 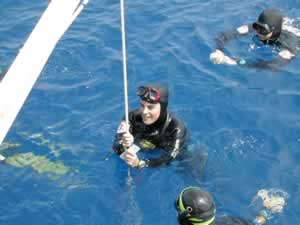 Male leader board at the end of the Constant Weight Competition-

So that’s it for another exciting day. Still no news from the Deepest Bear, although we now know that the Scubies have him. Sam Kirby said she didn’t mind if he didn’t return just as long as he went to 105 metres…. And enter the DeeperBlue.net Photo Quiz for the chance to win a Performance Freediving Course with Kirk Krack. First for all the results, news, insider information and prizes, look no further than DeeperBlue.net!

Permit For Using Certain Scuba Tanks Has Been Renewed