This afternoon I had occasion to sit at the Legal Seafoods bar in Reagan National Airport in Washington, DC. Scarfing down a South American striped bass and earnestly chatting with a fellow participant in a conference that had wrapped the night before, I noticed the lively roar in the dining room had abruptly stopped. We surveyed the crowd, and our eyes were drawn along with theirs to the bigscreen TV hung up in a corner.

An advertisement for David Blaine’s Drowned Alive event was playing. It was stunning. It had brought a restaurant full of the world’s most jaded and cynical travellers ( it was, after all, Washington, DC) to a standstill.

Me being the awkward country boy I am, I blurted out ” Hey! I’m going to be there for that tomorrow !”

Everyone in the room turned to stare. For a few seconds, basking in David Blaine’s reflected light, I was at the top of the capital’s A-List.

This thing his huge. New York Magician David Blaine to enter 8′ diameter ‘sphere’ aquarium for seven days underwater and then end with an amazing breath-hold and life saving escape.  Performance Freediving International will be maintaining a 24/7 vigil as coaches and safety divers during event and 2hr LIVE special on ABC Television. 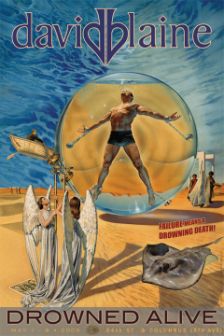 The controversy has already begun within the freediving community.

Some are scornful of Blaine’s project, denouncing it for various and sundry offenses. Some are disturbed by the participation of the Performance Freediving team, concerned that the implicit ( or explicit) endorsement of David Blaine’s performance by leading competitive freedivers will somehow taint the sport, or mislead a naive public as to the true nature of it. “Are we going to take some razing from our peers?” asks Performance Freediving President Kirk Krack, rhetorically. “Of course ! And we know this, but if you could only know the story behind the story and the amazing successes we’ve seen in training you’d be amazed.”

The PFI team, Kirk plus Martin Stepanek and Mandy-Rae Cruickshank have invested a lot of time and effort into preparing Blaine for what has been titled the Drowned Alive performance. It’s a giant step up for freediving in terms of media, as the involvement of ABC, one of the three American broadcasting giants, attests. Kirk: “So here we are, April 30th and about to run off to our last pool training session with David before he enters the sphere tomorrow at 1pm.  An adventurous 7 days ahead with tons of problem solving. A man and an environment which don’t want to go together with the greatest of ease.  Finish it with something that most people can barely achieve with the best of conditions and we’ll let this adventure play itself out in front of 20 plus million people around the world.”

It’s not at all surprising that voices from within the freediving community have been raised in opposition to the marriage this show represents, an unprecedented merger of pure sport and high entertainment. The currents underlying the criticisms seem to range from an unseemly (though, again, natural) jealousy through ideological rigidity to legitimate athletic self-interest. I think that everyone involved harbors uncertainties, as well they might: nothing quite like this has every been done before.

Deeper Blue willl carry near-real-time coverage of David Blaine’s Drowned Alive event, from the freediving perspective. I mean to keep an open mind, try to have fun and wrestle with understanding what this is we see taking place before our very eyes. I hope you’d help – email me with any questions, comments or curses. If you have a question or comment for David Blaine, or any of the Performance Freediving team, send them to me and I’ll pass them along.

Some of my colleagues and friends genuinely fear that this will mark the beginning of freediving’s descent into low comedy, something like professional wrestling. It’s no secret I’ve advocated the development of new kinds of freediving events, something more generally interesting -more thrilling– than swimming up and down ropes or back and forth in pools. I never had anything like this in mind, but I knew (and I think we all know) that big sports are the ones that generate good television. David Blaine’s incorporation of freediving lore into his show, and his involving top names in competitive freediving does indeed carry risks. It is also a stupendous, unprecedented opporunity for freediving to broaden its appeal to an extent which will make it possible for a legitmate professional industry to grow and prosper.

Whatever happens, we’re at a crossroads. A turning point. It will never be the same after this, so watch this space for updates. David Blaine climbs into his sphere Monday, May 1 and the games shall then begin.

Read more coverage of the David Blaine event from Paul in our David Blaine: Drowned Alive? Special Feature Series and check out the Photo Gallery and Audio Interviews!