Aharon Solomons is pacing in the kitchen.

It’s hot and humid in La Paz today. He’s explaining to me the safety measures planned for the upcoming Nationals. MT is busy on the phone, getting everyone (safety divers,  AIDA judges, competitors) set up with hotels and flights. She is patient, as she must be in dealing with the Mexican administration that is sponsoring some of the athletes’ accommodations in Cabo San Lucas for the competition on 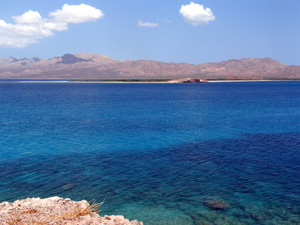 Having dealt myself with administrations from different countries I came to the following conclusions: 1)dealing with them is dreadful, 2) it requires loads of patience, and 3) an angelic smile like MT’s can open lots of doors. As for Ze’evy, their son, he’s playing “Lord of the Rings” on his Gameboy, chilling on his bed, enjoying life in town before heading back to camp in “Punta Coyote” where he runs around playing with the local fishermens’ kids.

The Solomons are a great tribe to be around. Those of you who’ve had the chance to hang with them know it. I quickly found myself at home in their remote desert camp.

Three disciplines: Constant, Static and Free Immersion. El primo ! And, as always, when doing something for the first time, lots of excess energy is expended and tension quickly builds up around putting the puzzle pieces together.

“It is the last time I organize and compete at the same time!” Aharon vows after a long day running around in La Paz getting things moving. That day we got back to the house late, and all of us were pretty tired from the heat. MT got on the phone to talk to a local network for TV coverage of the event while Aharon and I stepped through the safety review. “Three boats total, one for the journalists and TV, one for transporting the competitors back and forth from the barge, and one evac boat for emergency purposes", so ran Aharon’s checklist. "We have agreed with the Navy and Coast Guard to establish an evacuation/safety corridor where no other boats will be allowed passage or anchorage during the whole competition.” Aharon Solomons knows a thing or two about planning and executing complex operational logistics, and it shows.

The barge. The barge is known in Cabo San Lucas as “Pipin’s Barge”, as it is the one he used on his records.  Safety is important in this competition, as in any other, but the very mention of Pipin’s name reinforces the importance that must be paid to every detail. Aharon and MT are very well aware of the responsibilities that come with the organization of  such a competition.

MT hangs up and smiles: TV is coming and another sponsor is about to join. 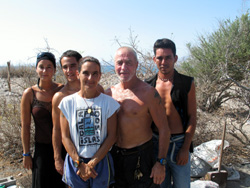 She’s exhultant: “Fifteen participants so far including us!”. She stops and recites the event factoids from her bottomless memory:“Luis Turrent is going for 55m in constant, Alejandro Lemus for 50m”.

MT puts a finger on what may be the future of Mexican competitive freediving: “Nicolas Moreno 40 Meters in Free Immersion”. Here’s an interesting story. Moreno came and trained with us while in Punta Coyote. He’s a gaucho, yes, an actual cowboy introduced to freediving by Aharon and MT. I’ve had a few conversations with the guy and only one thing is on his mind from the moment he gets off work, and that one thing is to come, train, and learn more from the freediving instructors. “Free immersion is a great way to introduce people to freediving around here. No equipment needed – come with your body and your mind and learn”, says Aharon.

Macarena Benitez and Manolo Gonzales are also part of that new wave  of Mexican freedivers. Both are studying marine biology at the University in La Paz and are enthusiastic about this new way to interact with the ocean. Macarena is going for 30 meters in constant “she has a good monofining style”, according to Aharon.Coming from him that is a hell of a compliment, as his standards are high. I believe he and and MT have spent too much time with those perfectionist Russians!

Manolo is going for a 35 meters free immersion.

The spice to this competition is MT Solomon’s attempt to break the UK Womens record of 54 meters in constant weight held by Hannah Stacey. She’s announced 60 meter. “She did it in training several times!”, declares a confident Aharon, who knows MT’s potential to the finest degree. 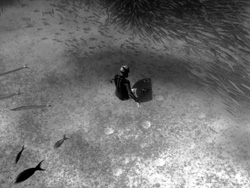 MT trained with Audrey and Pipin in Cuba and then had to withdraw from competition to have her son Ze’ev.  She is back in business, and looks amazing in the water. Her monofin form is perfect.

MT’s usually calm spirit was been shaken by the loss of her father a few days before I met her. She was preoccupied, but during our first day in the water  she threw small Tibetan paper prayer flags in his memory. Seeing her in the water, I believe she will find the balance in her mind to achieve  the record, as she is a consummate athlete.

Last but not least, apnea guru Aharon is shooting for 60 meters in Constant as well, which is nearly a meter for every year he has lived his extraordinary life.  I hope I look like him when I’m an "old guy". He likes to call himself that to make young padawans  like me feel squishy and out of shape. Aharon if you are reading this, you like to travel? (Editor’s Note: That’s an inside joke. I don’t get it myself !).

There are a lot of different layers to this competition: organization, bringing new athletes to the discipline, records, safety, accommodation and much more. But one must not forget that the engine driving this event is the desire to show a nation and the world that freediving is a safe sport when proper safety protocols are rigorously observed. Oh, and that this passion of ours is a life-changing experience, that too

Thanks to all of you competition organizers, competitors and   freediving instructors for taking the time and assuming the responsibility to make these events possible. Thanks to you, Aharon, MT and AIDA Mexico for creating such an event and making the sport grow.

DEMA Educational Sessions Are Back For 2022