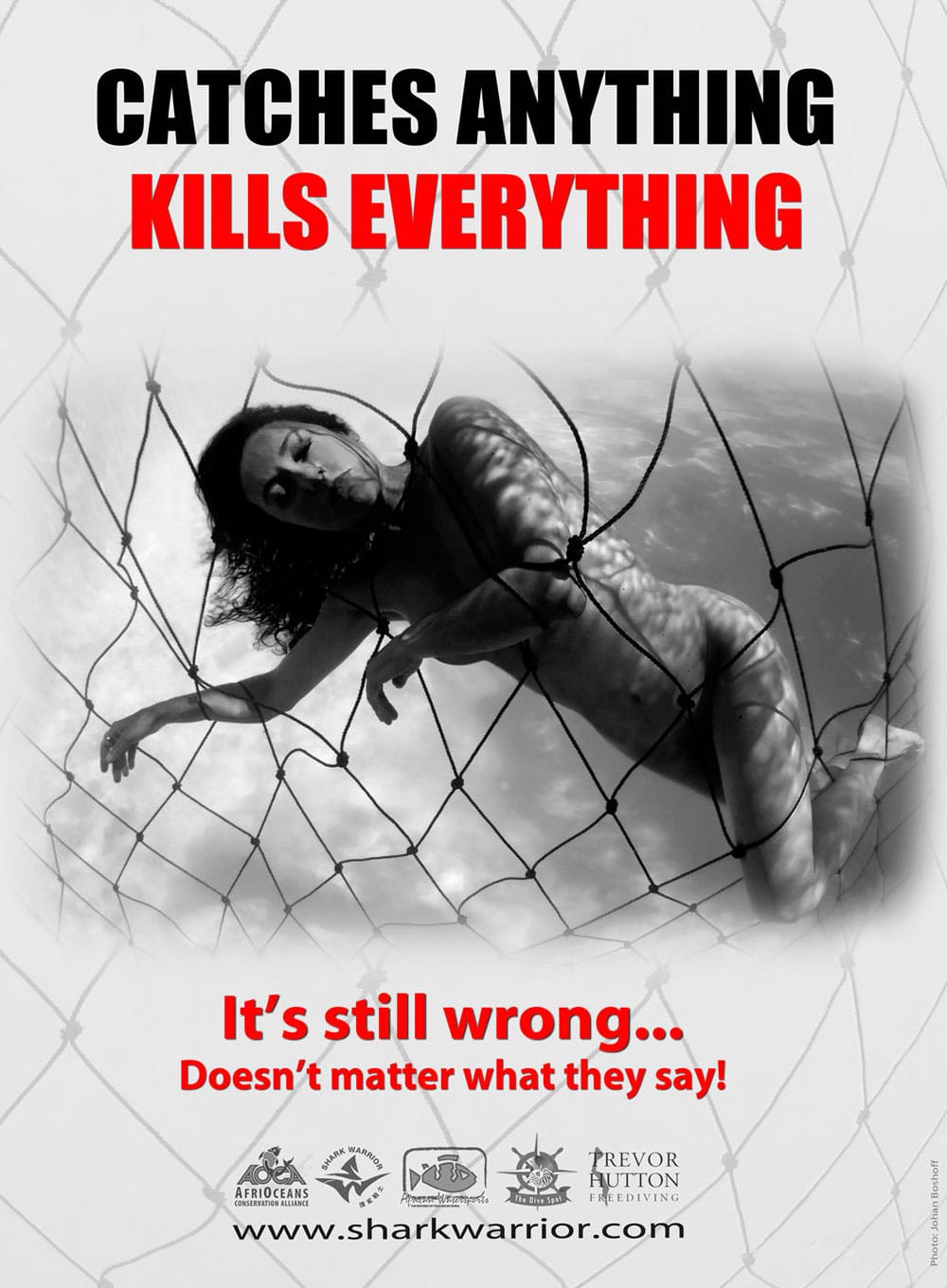 South African freediver and marine conservationist Lesley Rochat has set out to prove by example that sharks are not the evil, man-eating predators people perceive them to be, but an extremely threatened and important part of the marine ecosystem.

Known as the “Shark Warrior” and frustrated by public and government inertia about shark conservation, Rochat has stripped naked for a poster for an anti-shark net awareness campaign. The photo shows her tied up in gill netting, to make a point as visually powerful as possible.

“I have proudly joined women who have through the ages gone naked to protest against numerous issues of concern,” Rochat said. “For example, women have gone naked against bull fighting, against war, against the fur trade, and now against the senseless slaughter of our sharks and other marine life in the Kwazulu-Natal shark nets in South Africa.“

Rochat visited the beaches of Florida recently, as part of her research in areas of high shark attack frequency. While Florida is known as the “shark bite capital” of the world, no shark nets are placed to protect bathers. South Africa, however, still has shark nets lining sections of its coast, which indiscriminately kill many sharks and other innocent marine animals every year.

“These nets are wiping out our tiger shark population, which people come from all over the world to dive with. They are of high value in the shark diving eco-tourism industry. Florida, despite its high shark attack statistics is a very positive example for South Africa to follow,” according to Rochat.

From Florida,  Rochat traveled to Tiger Beach, a dive site in the Bahamas, where she gathered images and footage of sharks for a book and a documentary to use for her campaign, which aims to put shark attacks into perspective.

As part of the campaign, Rochat freedived with large tiger sharks at Tiger Beach. “It’s important for me to walk my talk and show people that sharks are not monster man-eaters with insatiable appetites for humans, but rather beautiful animals we ought to respect and protect,” she said.

Freediving with tiger sharks — considered the second-most dangerous — was a new experience for Rochat: “Because of all the bad publicity tiger sharks have received over the years, I felt vulnerable. But the second I dove down and swam beside a beautiful tiger shark, my fear dissolved, replaced with the simple joy of being free with the animals I love so much — they really are very badly misunderstood. They need all the help they can get.”

For more information head to http://www.sharkwarrior.com

The dates of the “Let’s Talk Aquatics: Marine Virtual Series” have been announced.
Read more
Freediving

The Reef Renewal Foundation Bonaire recently announced the addition of Divi Dive Bonaire and VIP Diving to the list of dive operators that are supporting the island's reef restoration efforts.
Read more