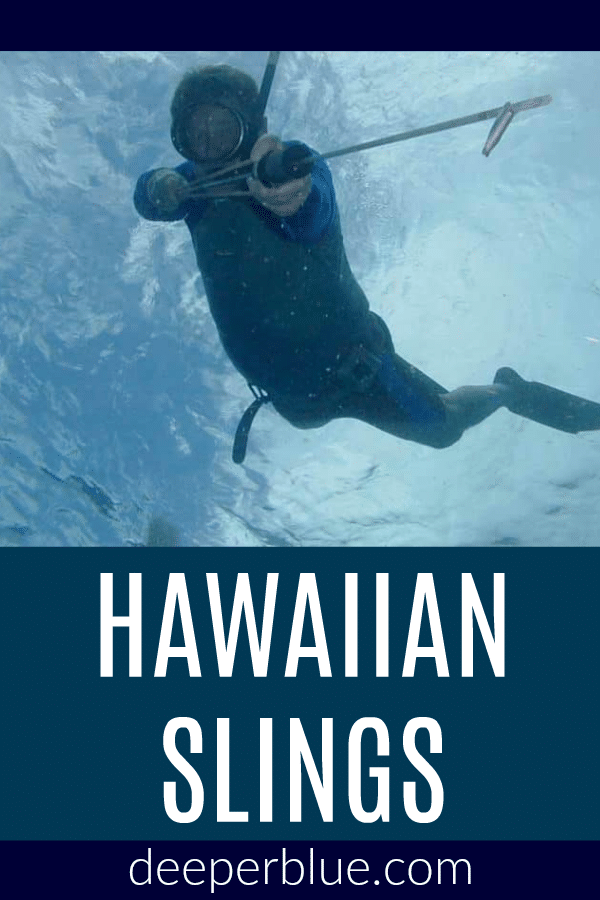 An old buddy of mine told me he liked a sling best for spearfishing because he felt like he was a part of it, and it was a part of him. Art Pinder was his name, and there’s no doubt he knew what he was talking about because he and his brothers Don and Fred won numerous Florida Championships and the USA Nationals back in the early fifties competing against divers with spearguns. Art’s World Record sailfish and Don’s Goliath grouper, still stand today. Hawaiian slings have been in use, virtually unchanged for more than 70 years.

A Hawaiian sling was nothing more than a short piece of wood or bamboo drilled to allow a spear shaft to pass through it, with a rubber band whipped tightly to the wood about dead center of its length to propel the shaft towards a fish, much like a bow and arrow. The spear shaft was whatever piece of steel the diver could find, maybe a brake rod or an umbrella stay, sharpened to a point with no barb at first, and later adapted with a cut nail to assist holding the fish onto the spear shaft. In time a sling shaft became equipped with a single flopper or barb, that would lay flat when fired, and then after penetrating the fish, it pivoted out to a perpendicular position, keeping the fish from easily slipping off the tip. The beauty of shooting a Hawaiian sling is the speed, range, and accuracy that an untethered shaft provides, which is easily double the capability of any polespear and approaches that of spearguns. The free shaft also lacks safety issues due to zero entanglement without shooting lines. Slings are best for spearing bottom fish within the diver’s depth range. Shot placement is the key to successful sling spearfishing.

Hawaiian slings are more complicated than polespears, and require hands-on training. It is highly recommended to seek out competent spearfishing instruction.

Just like polespears, remember that loading any spearfishing device on land can be very dangerous. All spearfishing gear is made to be loaded and shot only underwater, which greatly reduces the speed and power. A sling is different than a polespear because it consists of two separate parts, the sling body with the attached rubber band, and the sling shaft. Many people have been injured by slings on land, thinking that drawing back a sling without the spear is safe. If held improperly the sling can slip out of the forward hand and hit the user in the face or rear hand with significant force. Gloves for grip and hand protection are recommended for all spearfishing. If the shaft is loaded in the sling and finger grip with the drawing hand is lost, the shaft could easily fire with extreme danger and destruction.

Lately, there’s been a dispute about which hand should be gripping the sling, so I’ll just tell you what works best for me and most of the slingers I know. I use my non-dominant hand to hold the sling out front, stiff-armed and pointed at the target, which is the simplest and easiest part of slinging. Conversely, the strength required by the drawing arm, shoulder and back muscles is enormous, as is the grip strength required by the drawing hand. The coordination of drawing and releasing a powerful sling in brief seconds is also best handled by your dominant side. The protocol for archery, a very similar shooting sport with far greater history and the number of participants, also recommends the dominant side for the drawing hand. Art Pinder had a serious injury to his left non-dominant hand and arm, and yet that didn’t stop him from becoming the “King of Sling!”

So how do you hold a Hawaiian sling?

Remember to treat all spearfishing devices as though they are loaded, and keep a tip protector on the shaft. Do not point even an empty sling at anyone or anything. A sling has no trigger so Do Not Draw the Sling Back on Land! Remember all spearfishing equipment is only loaded underwater. Be aware of what is beyond where you are pointing the sling.

­­First just place the sling in your front or sling hand. There are several different sling models which require different grips. The traditional round wooden sling is placed with the back edge buried into the palm, along with the lifeline, so that the base of the hand stops it from slipping back. Then wrap your thumb and fingers tightly around the midsection of the sling. Many slingers like to point their index finger along the side to line it up with the shaft. Other slings have a knob on the front to resist hand slippage and some have pistol grips, but few of the latter have a wrist brace to stop it from pulling the muzzle up. The latest models combine the wrap around design with a hand/thumb brace on top which balances against the sling draw very well. Whatever a sling is made of, it should not be slippery and generally, most slingers prefer floaters to sinkers. Next insert the shaft through the sling and fully into the cup at the rear of the band, and pinch the shaft at the top of the cup with your thumb and index finger of your drawing hand, then wrap the remaining fingers around the rest of the cup. Do Not Draw the Sling Back on Land!

To simulate drawing the sling, first, remove the cup and band from the shaft and let them hang free. You can hold just the back of the shaft in your drawing hand, and without the cup and band, the spear is not loaded. Now you can draw your preferred hand fully back, with the shaft to a consistent place on your jaw or cheek, which is called the anchor point. To be accurate you must always draw the shaft to the same point.

I recommend underwater target shooting, so get a hard foam fish target (and ballast weight) that will hold a spear firmly and not come apart. Position yourself about 6 ft / 2m away and a little above the target on an angle, so the shaft will hit the sand if it does go through the target. After firing note the error and compensate on your next shot, and so on, and increasing the distance. The sling band will only allow holding it in the loaded position for a second or two, so you will need to make a quick decision to fire, or unload by bringing your drawing hand in unreleased. Try to level off at your firing depth because both your hands are in use and equalizing will be difficult without unloading. Snap shooting refers to releasing the shaft without pausing and aiming. Eventually, after taking many hundreds of shots from several distances and angles, you may develop instinctive shooting.

My first Hawaiian sling, from the early eighties, was a modern looking molded plastic design with cones inserted into the rubber at the back of the sling’s attach points, to make rubber changes easier. Pistol grip models showed up in the nineties, but these minor changes offered no improvement in the shooting ability of slings, and many actually reduced the band stretch by 4 to 5 inches and shot poorer than the old primitive slings.

Fast forward to today and you’ll still see basic Hawaiian slings hanging in stores with plenty of sling shafts nearby. Today high-quality sling shafts come in three shaft diameters, 1/4” or 6.5mm, 9/32” or 7mm, and 5/16” or 8mm, and several length choices usually from 60” / 150 cm to 72” / 180 cm. Thin and short shafts are fast but don’t hit very hard and bend easily, whereas heavy long shafts hit hard and are strong, but they are also slow shooting. My favorite shafts are the middle diameter and length models, fast and strong and with barbs that lockout in the open position to keep fish from spinning off. Because the biggest disadvantage of slinging is losing or bending shafts, the good news is that sling shafts are inexpensive to replace compared to broken or bent polespears or gun shafts.

Around 2014 improvements in Hawaiian slings were introduced that have made a huge difference in range, accuracy, and shaft security. To date, I have seen four models of slings, available to the public, that increase band stretch by up to 11 inches or 28 cm over many previous slings. Since the average diver has a draw of about 33 inches / 83 cm, this represents an increase of approximately 33%. One sling design runs the bands from the front of the sling, then through it on either side of the shaft tube, and all the way back to the center cup. It also has the top hand/thumb brace. Another has the bands running outside the length of the sling body and has a pistol grip to keep the hand from interfering with the bands, and it has a wrist brace. Two others resemble small archery bows with elongated bands coming from above and below the sling hand. With the large increase in power, these slings allow a diver to shoot much farther and more accurately with freeshafts.

Another huge advantage of added sling power is that the shaft can have a shooting line attached via a slide ring. Shooting lines create much drag so the range is not also increased, but with the shaft tethered to the sling, it greatly reduces the chance of shaft loss. Some of these slings can also have reels mounted to them, to allow releasing more line so the diver can surface to breathe without losing the connection to the shaft, and can shoot in water deeper than his / her depth range. Slings with reels can also be used to shoot larger fish or pelagic fish that are not easily landed with freeshafts.

It all sounds amazing, but a shooting line creates some big disadvantages as well. The obvious big one is entanglement. Since slings don’t have long barrels like spearguns, to retain and release shooting lines, the line must be pulled off a reel first, and either left floating nearby or held away from the body and gear by the diver. By the way, sling divers never have free hands. One sling has short wraps on the sling body to attempt retaining a shooting line, but since the body is less than a 1 ft / 30 cm, it is of little value. Another disadvantage is the greatly increased time it takes to get a fish off the shaft and getting the shooting line and shaft ready for the next shot. Like the new polespears, these slings with shooting lines can also be attached to float lines.

Hawaiian slings are allowed while freediving in some countries that do not allow spearguns, such as the Bahamas, Okinawa, and Japan.

Although far from perfect, the new slings are landing some amazing fish, including many new world records!