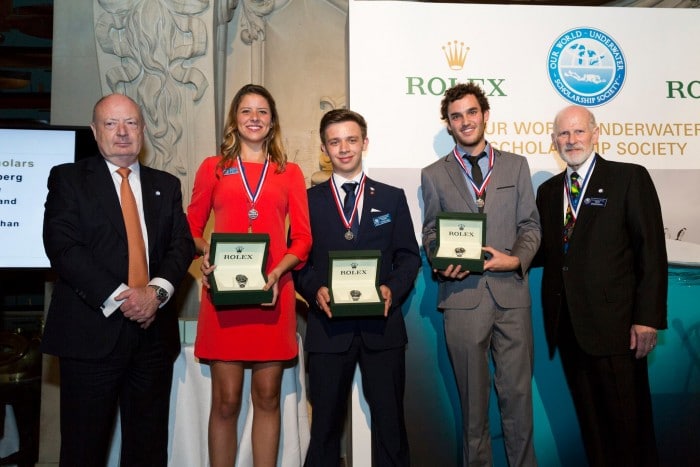 The Our World Underwater Scholarship Society recently inducted its 2015 Rolex Scholars from North America, Europe and Australasia, during a ceremony in New York City.

The North American Rolex Scholar is Michele Felberg. She earned a Bachelor of Science in Environmental Studies and a minor in Economics at the University of Southern California, where she also earned her NAUI Open Water certification along with an AAUS scientific diver certification. During her studies, she spent time in New Zealand and Micronesia, and after graduation worked as a Dive Guide and underwater naturalist for a dive center in Palau.

The European Rolex Scholar is Daniel Copeland, a graduate of the University of Sheffield in England. Certified as a PADI Open Water Diver in high school, he joined the university’s sub-aqua club, helping to organize dive trips around the country. He also trained as a drysuit and nitrox diver, and has taught fellow students as a British Sub-Aqua Club Assistant Diving Instructor. He also serves as the Media Manager for the Manta Trust, working with marine NGOs to set up online campaigns that to enact protective legislation for sharks and rays. Additionally, Copeland shot a one-minute film on blue sharks that placed second in an amateur wildlife film competition.

The Australasia Rolex Scholar is Benjamin Buchan, a graduate of Macquarie University. During his studies, Buchan volunteered on an island off the coast of Cambodia, helping a team start up an artificial coral reef program and removing more than 100 fishing nets that had begun to cover the surrounding reef. He also was a volunteer at Manly SEALIFE Sanctuary, where he worked as a Shark Dive Coordinator.

The Reef Renewal Foundation Bonaire recently announced the addition of Divi Dive Bonaire and VIP Diving to the list of dive operators that are supporting the island's reef restoration efforts.
Read more
Ocean

The Ocean Tracking Network says it and its partners surpassed 300 million animal detections in 2020.
Read more